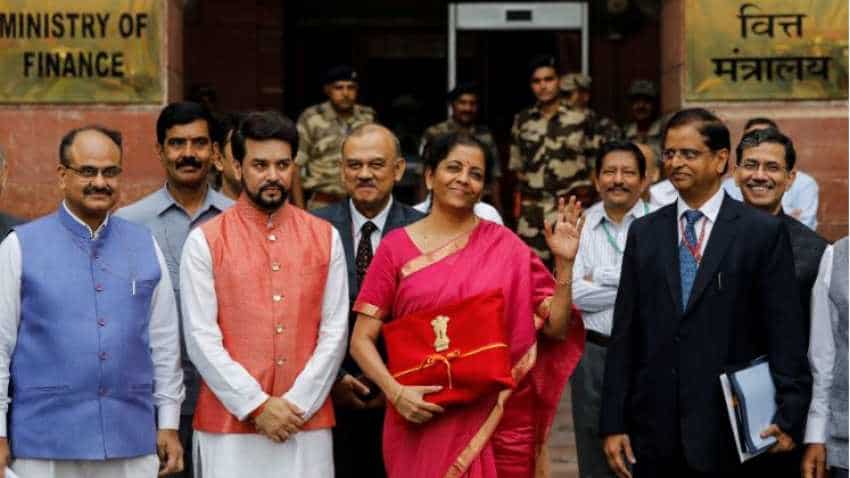 Finance Minister Nirmala Sitharaman (C) gestures during a photo opportunity as she leaves her office to present the federal budget in the parliament in New Delhi. Image: Reuters
Written By: Rajeev Kumar
Edited By: Harish Dugh
RELATED NEWS

Income tax Calculator 2019-20: In her maiden Budget speech today, Finance Minister Nirmala Sitharaman proposed to increase surcharges on high-income individuals earning above Rs 2 crore. Before announcing this, Sitharaman took the opportunity to first state the moves undertaken by Narendra Modi government to decrease tax burden on the common man and thanked taxpayers for their role in "nation building."

"Mr Speaker Sir, as I have stated earlier, we have taken several measures in the past to alleviate the tax burden on small and medium income-earners as those having annual income up to 5 lakh are not required to pay any income-tax. We are thankful to the taxpayers who play a major role in nation building by paying their taxes" the Finance Minister said.

Sitharaman, however, proposed to increase surcharges for the superich. She said, "However, in view of rising income levels, those in the highest income brackets, need to contribute more to the Nation’s development. I, therefore, propose to enhance surcharge on individuals having taxable income from 2 crore to 5 crore and 5 crore and above so that effective tax rates for these two categories will increase by around 3 % and 7 % respectively."

The calculator prepared shows that income tax for those earning Rs 10 crore per annum will now have to pay Rs 68 lakh.