Gold rules at all time highs of over $1400; Should you buy this yellow metal? 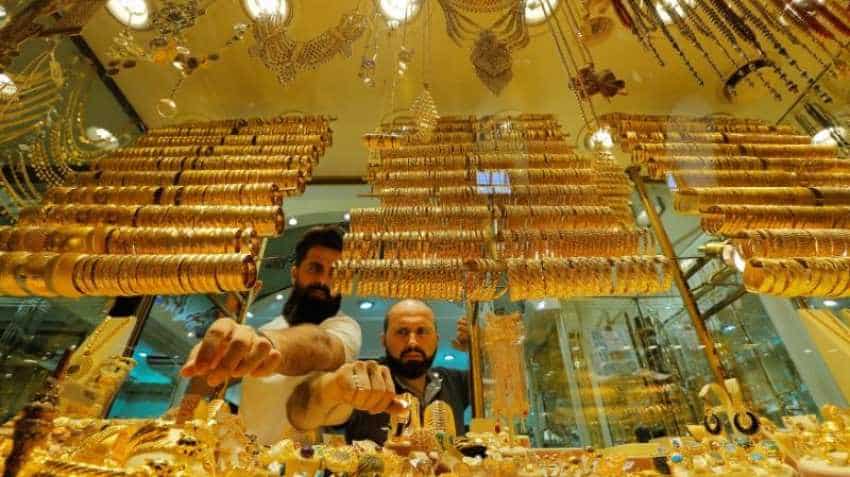 Everything is working in favor of gold right now as it has spiked to near 6-year highs. Photo: Reuters

Everything is working in favor of gold right now as it has spiked to near 6-year highs. This works well for existing investors who bought the yellow metal, let’s say, last year, but sadly not a good news for anyone who is seeking to buy gold at the current levels. For instance, 24 karat gold in 10 gram at Mumbai, which traded near Rs 33,350 on June 20, has now skyrocketed to nearly Rs 1000 the very next day on June 21 at Rs 34,200. Similar was the case of 22 karat gold. With that, global gold prices have even crossed to over $1,400 an ounce which is highest since September 2013. Also, the MCX gold August Futures price swung above to Rs 34,468 per ten grams, slightly near to their second all-time of Rs 34,549 which was last witnessed in the same September 2013. Now gold price in India has finally inched over Rs 35,000. 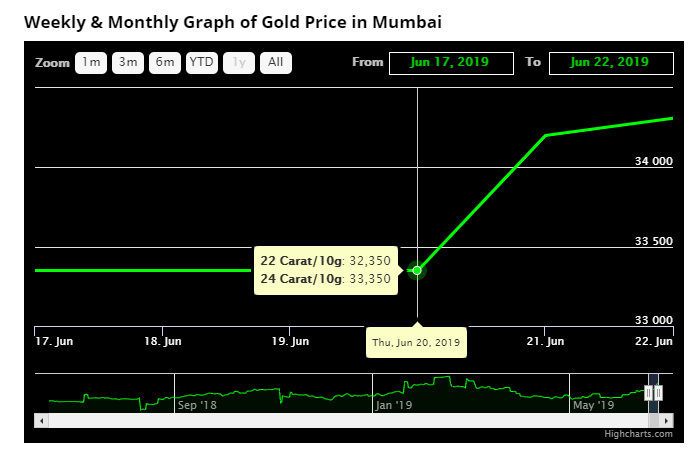 Geopolitical tension, US Federal Reserves dovish stance and further rate cut hints from the FOMC has created a heavy likeness for gold among investors heart. Gold is likely to rise further, which is why it is very important to understand when is the right time for buying this yellow metal.

The current scenario at global front is critical which has made investors cautious on stock investments. But that is generally not the case with gold prices considering they are safe haven assets. Firstly, there is rising geopolitical tensions among investors, with US already in spat with China over trade wars and now recently even US and Iran tensions have escalated. The United States President Donald Trump has already imposed hefty tariffs on Chinese items with more expected to follow, however, last week on Thursday the US came into tension with Iran when Iran's Revolutionary Guard shot down a US surveillance drone.

Hence, geopolitical tensions has convinced investors to opt for more gold investment. Gold due to their nature of safe haven, become a better medium for investment, hedge funds and lower the shocks of political uncertainty.

Last but not least, it would be the US Federal Reserves which left the fund rate unchanged but delivered a dovish message to all. Expectations have now fueled further rate cuts hopes from the US front. Expert at Goldman Sachs in their note said, “ Seven of the 17 participants projected 50bp of easing this year, and the statement provided an unqualified “will act as appropriate” signal that cuts are now likely.”

Even though real interest rates hold much higher importance in the price of gold, yet the US Federal Reserve funds rate does have an influence on the macroeconomic environment and thus gold market as well. Link between gold and US Fed rate is manifold. For instance, the US Federal funds rate impacts the short-term interest rates, and thus indirectly the US’ whole structure of interest rates. Currently, the US inflation rate stands at 1.8% in May 2019, lower from the previous month. While the FOMC’s funds rate is held at 2.5% which was increased to that level last year in December month.

The basic knowledge, indicates that, if rate increases faster than inflation it has a massive negative factor on gold price which is a non-yielding assets. Because, in rate hike scenario bonds and fixed-income investments become more attractive. On the contrary, when the US Fed fund rate declines, it pushes the real interest rate also down a positive for yellow metal.

Up or down? Where is gold headed?

On US Fed rates, Expert at Goldman in their note said, “We now expect cuts in July and September, as well as an end to balance sheet runoff in July. Our base case is for moves in 25bp increments, but a 50bp cut is possible if the news flow disappoints and/or Fed officials feel compelled to get ahead of bond market pricing (which currently implies a 32bp cut in July). Conversely, the hurdle appears to be very high for the committee to forego a cut in July. Our economic view remains for growth slightly above trend, a gently declining unemployment rate, and a rebound in core PCE inflation to 2%+ by early 2020. Nevertheless, we now expect the funds rate to remain below 2%—i.e. slightly negative in real terms—at least until the 2020 election.”

SMC in its research note explains that, Bullion counter may continue its sharp upside momentum as dovish stance by the Fed in last week meeting and geopolitical tensional in middle east continue to assist the prices higher. U.S. Federal Reserve indicated that it could cut interest rates as early as July, prompting a sharp fall in the dollar and U.S. Treasury yields. The Fed stated that it was ready to battle growing global and domestic economic risks with interest rate cuts beginning as early as next month, as it took stock of rising trade tensions and growing concerns about weak inflation.

Sachin Jain, Research Analyst at ICICI Securities said, "Gold prices in the near term may find support due to concerns on trade war and higher volatility in capital
markets. The medium term outlook, however, remains benign given the rising global interest rate trajectory and reducing monetary stimulus."

Earlier in the February 2019 month, we had already explained that Rs 35,000 gold price can be expected in the next 6 months. That time, Kishore Narne, Head of Research at Motilal Oswal said, "Overall underline term is that, gold prices will be bullish. However, they will first witness a Rs 34,000-mark and will witness price correction and slow down for awhile. But i think in next 4-6 months, gold price will be at Rs 35,000." Adding Narne said, “Narne said, when the gold price comes between Rs 33,800 to Rs 34,000, some profit booking must be done. Then from there one should wait for dips to make buying.”

Well looks like the countdown has finally begun. Hence, if you have bought gold at lower price end, one can definitely opt for profit booking as the price of this yellow continues to soar. However, for new investments it would be advisable to wait for slips.