Gold price prediction 2020: This is what can happen to yellow metal in one year 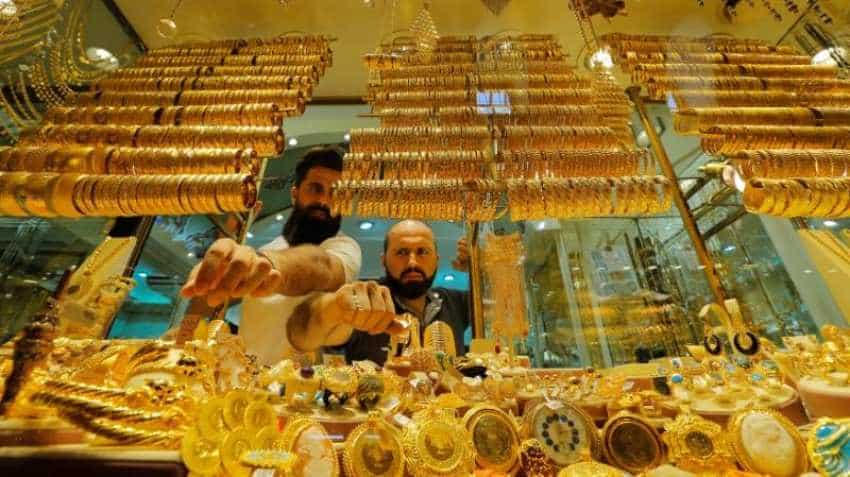 In India, gold prices have already clocked a new high of Rs 36,000 per 10 gram (24 karat) in many cities. Photo: Reuters
Written By: Pooja Jaiswar
Edited By: Rajeev Kumar
RELATED NEWS

If US President Donald Trump gets his way with US Federal Reserves for trimming down interest rates,  you can brace for a further rise in gold prices even as prices are already on an upswing. It almost feels like a stubborn rise in gold prices, even though the US Fed has been on cautious and wait-and-watch mode for its monetary policy. The issue would be Trump’s agenda for rate cuts, which was fueled when other central banks like European Central Bank hinted at cutting their rates.

In India, gold prices have already clocked a new high of Rs 36,000 per 10 gram (24 karat) in many cities. Interestingly, you can expect the price to surge further as a host of factors will likely play their role in the next 6 to 12 months.

Trump vs US Central Bank!

Currently, both the US President and the central bank don’t agree with each other. Trump on various occasions, through his twitter account, has talked about lowering US interest rates. Not only that, Trump even called out the US Fed for having a "faulty thought process".

Trump had tweeted, “Because of the faulty thought process we have going for us at the Federal Reserve, we pay much higher interest rates than countries that are no match for us economically. In other words, our interest costs are much higher than in other countries, when they should be lower. Correct!”

Because of the faulty thought process we have going for us at the Federal Reserve, we pay much higher interest rates than countries that are no match for us economically. In other words, our interest costs are much higher than other countries, when they should be lower. Correct!

Meanwhile, US Federal Reserve Chairman Jerome Powell has shrugged off Trump’s accusations. According to Investing.com, the US Fed cited the central bank’s independence and a lack of necessity for responding to short-term political pressure.

As per the Fed Rate Monitor tool of Investing.com, markets are convinced there will be at least a quarter-point cut and there's a 60% chance that the rates will be 50 basis points lower after the September policy meeting.
Not just US Fed, other central banks worldwide have taken an increasingly dovish stance, hinting at further rate cuts. This can also create a forex war as well. In such a scenario, investors have found a favor for gold and other precious metals.

Recently, a Reuters report said consumers in leading Asian hubs continued to sell off physical gold this week with some switching their holdings to silver after a jump in prices that also attracted interest from investors betting on further gains.

Where is gold headed?

Experts at World Global Council in their mid-year outlook for 2019, believed that  over the next six to twelve months:

- Price momentum and positioning may fuel rallies and create pullbacks, as investors continuously reassess their expectations based on new information.

The experts said in the note, “The prospect of lower interest rates should support gold investment demand. Our research indicates that the gold price was higher in the 12 months following the end of a tightening cycle. Moreover, historical gold returns are more than twice their long-term average during periods of negative real rates – like the one we are likely to see later this year. At the same time, the US dollar – usually a headwind for gold – may remain range bound as trade tensions and lower rates offset continued economic growth.”

On the recent announcement of a 2.5% increase in gold import duty by the Indian Ministry of Finance, experts at World Gold Council said it “may result in a reduction to 2019 demand of approx. 2.4%.” They further said, “And that, if the higher levy were to become permanent, it could reduce long-term Indian consumer demand by slightly less than 1% per year.”

However, the experts also believe that the broad structural economic reforms being implemented in both India and China will likely support long-term gold demand.

Should you invest in Gold?

According to the World Gold Council research note, there are four attributes that make gold a valuable strategic asset by  providing investors with:

- a source of return

- a mainstream asset that is as liquid as other financial securities

Hence, these attributes are by-products of the dual nature of gold as a consumer good and an investment.