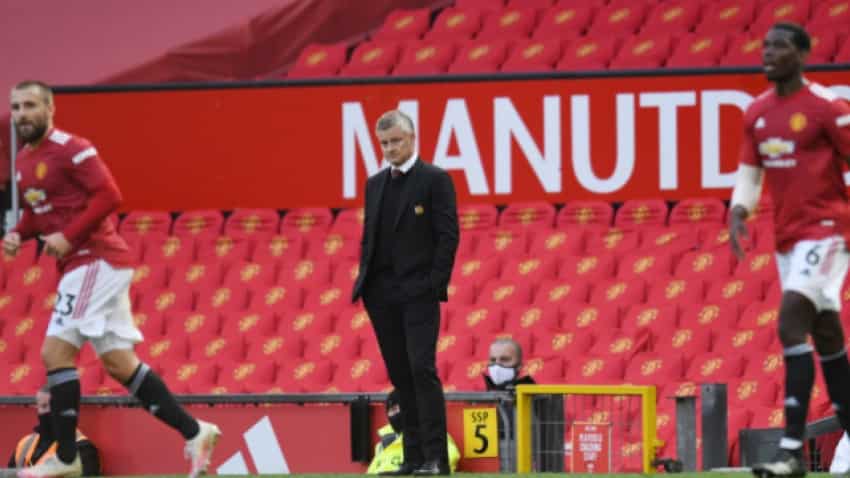 The Portuguese, who came off the bench after 66 minutes, stepped up to bend a right-footed strike beyond Liverpool keeper Alisson in the 78th minute to book a last-16 tie for his side against West Ham United.

Leicester City, fancied to go all the way, struck three times in the second half to win 3-1 at Championship side Brentford, while Tammy Abraham`s hat-trick gave Chelsea a 3-1 victory at home to second-tier Luton Town at snowy Stamford Bridge to ease some pressure on Frank Lampard.

Burnley won 3-0 away to Fulham while Everton dispatched Sheffield Wednesday by the same score to set up a possible fifth-round clash with Tottenham Hotspur who face Wycombe Wanderers on Monday.

A week after Liverpool and United`s turgid 0-0 stalemate in the Premier League at Anfield, the north west rivals served up a Cup classic full of attacking football.

Mohamed Salah scored both of Liverpool`s goals, the first to give his side an 18th-minute lead before Mason Greenwood levelled, and then again in the 58th minute after the outstanding Marcus Rashford had slotted United ahead.

A much-improved Liverpool looked the more likely winners but it was Fernandes who sealed it with his 28th goal for United since his debut last February.

"When you leave him out like I did today, he stayed about 45 minutes after training yesterday shooting free kicks so I was pretty confident he could score one if he got the chance," United boss Ole Gunnar Solskjaer, whose side have lost only once since exiting the Champions League in early December, said.

Liverpool have now won only once in seven games, although at least this display was more recognisable to the side that romped away to the English title last season.

"We can take things out of this game, we try to learn from every game. It`s good for Mo Salah, good for the confidence. It was a tough game," manager Juergen Klopp said.

Liverpool`s fabled forward line has been misfiring and had failed to score in four of their last five games, including this week`s shock home defeat by Burnley in the Premier League.

But it clicked into gear on Sunday and they went ahead in the 18th minute in tried and tested fashion -- Roberto Firmino slicing open United`s defence with a superb pass to Salah who dinked a cool finish over Dean Henderson.

United took only eight minutes to respond, though. Paul Pogba won a tackle on the edge of his own box, Rashford then advanced before delivering a `quarterback style` pass that Liverpool`s James Milner failed to cut out.

The ball arrived at Greenwood who took a touch before burying his shot past Alisson.

Another Rashford raid just before the break ended in Pogba flashing a shot just wide when he should have hit the target.

United were ahead shortly after the restart when Greenwood slid in Rashford who guided his shot past Alisson.

Back came Liverpool with Milner wasting a glorious chance to score before, a minute later, Edinson Cavani sloppily gave away possession in a dangerous area and Firmino`s ball in was dummied by Milner with Salah snaffling the chance.

Both sides hunted the winner but when Cavani was fouled on the edge of the area, Fernandes meted out punishment, meaning Klopp has now only reached the fifth round of the Cup once in six attempts with Liverpool.

Leicester`s reward for beating Brentford is a home tie against Brighton and Hove Albion while Chelsea are away at Barnsley. Burnley will play the winners of Tuesday`s tie between Bournemouth and Crawley.