When Diego Maradona arrived in Naples in 1984 following a major breakdown in his relationship with FC Barcelona, the city was among the poorest in Italy, in a hopeless situation and, on the football field, it was fighting to avoid relegation from Serie A. 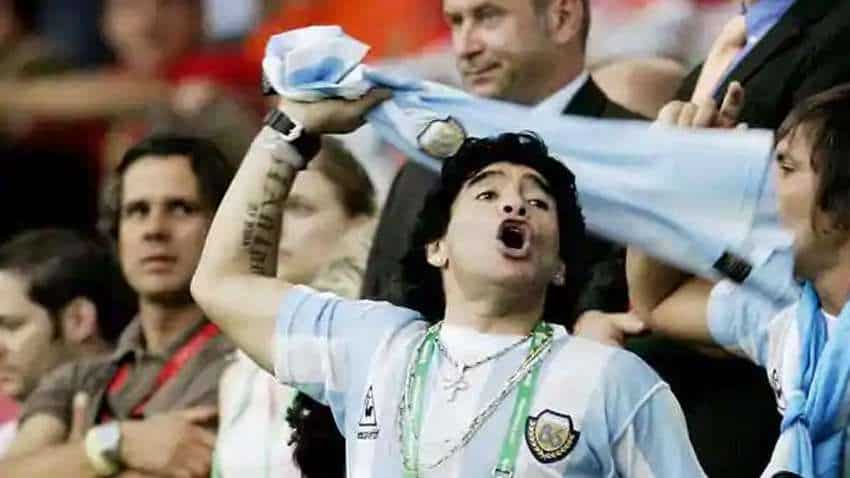 Maradona dead: "By some distance the best player of my generation and arguably the greatest of all time. After a blessed but troubled life, hopefully he`ll finally find some comfort in the hands of God. #RipDiego"

When Diego Maradona arrived in Naples in 1984 following a major breakdown in his relationship with FC Barcelona, the city was among the poorest in Italy, in a hopeless situation and, on the football field, it was fighting to avoid relegation from Serie A.

But Napoli, the team at Naples, shelling out a world record transfer fee of $10.5 million with the help of a bank loan, brought joy to the people of the city by bringing in `El Diego`.

He was termed as the saviour by the locals and nothing else mattered to them, including lack of civic amenities like sanitation.

Maradona`s was a record transfer fee, bettering his own but Napoli were willing to take that risk.

The Argentine legend won them the Serie A in 1987. Up until then, it was dominated by clubs from the north and centre of Italy -- like AC Milan, Inter Milan, Juventus and Roma. No team from the south of the country had ever won the league but Napoli, thanks to Maradona, accomplished it.

There were street parties and festivities for a week. The locals held mock funerals for bigger clubs like Juventus and Milan, burning their coffins, putting up death notices and even saying that the other Italy, i.e. the North has been defeated. North is where the wealth lay and where the bigger clubs were based. Napoli, the poor city was painted with Maradona`s murals.

However, while he got the nomenclature `God` at the club, his downfall too began at Napoli. There has been a debate about who is the greatest between Pele and Maradona and while most football aficionados have rated Maradona above Pele, the Brazilian scores over the Argentine with the way he has carried himself off the field, post his playing days.

While Maradona could never be an ambassador for the sport beyond his playing days, getting caught up with drugs, women etc, Pele proved to be the ultimate ambassador.

When he arrives he is shown as "very sweet, affectionate and very intelligent".

There is a news bulletin clip in the film where the anchor is shown saying, "The poorest city in Italy buys the most expensive player in the world."

"He became a God," the documentary says.

But then reality kicks in.

It says, "Maradona is a great player but he is not psychologically prepared."

The film divides the player into two - Diego and Maradona with Diego being different from Maradona.

Being famous proved to be a very heavy weight and it is shown to disturb him psychologically. "So Maradona took over".

The movie quotes Maradona as saying "Football is a game of deceit", and the director adds "so he started to look for a way to escape".

The movie says that those who hated him wanted to destroy him. The fact that he relied on mafia, eventually made him their property.

That is what did him in.

The worst came in 1991, when his call in Naples ordering two prostitutes was tapped and later used as evidence for cocaine possession and distribution -- since he had offered cocaine to the prostitutes on phone. A drug test later that year found traces of cocaine in his blood and he was banned from playing football for 15 months. He fled Italy to Argentina but was arrested there for cocaine possession.

Argentina soccer legend Diego Maradona died of a heart attack on Wednesday, his lawyer said. Following are reactions to his death:

A "devastating blow" for both city and club.

"Certainly, one day we`ll kick a ball together in the sky above."

"By some distance the best player of my generation and arguably the greatest of all time. After a blessed but troubled life, hopefully he`ll finally find some comfort in the hands of God. #RipDiego"