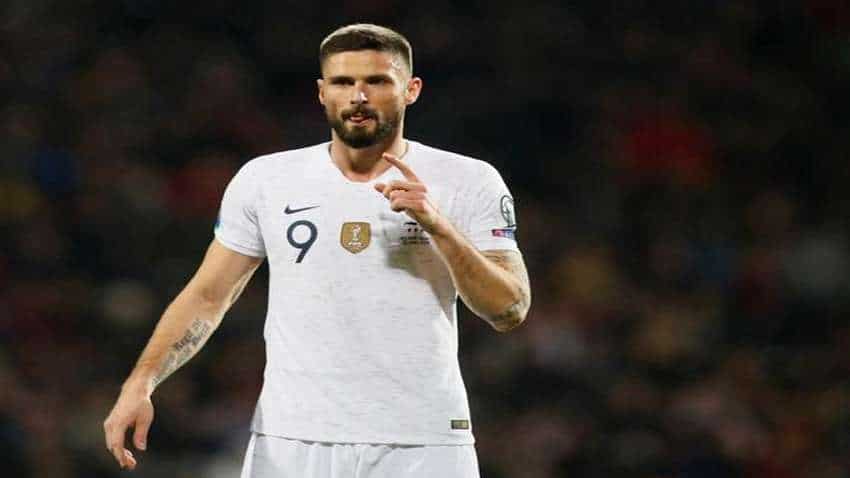 The French striker broke the deadlock in the 68th minute with an outrageous bicycle kick which was flagged offside but eventually given following a lengthy VAR review as the ball had come off Atletico`s Mario Hermoso before Giroud hit it.

Joao Felix had attempted an overhead effort earlier in the second half but missed the target in one of few chances for Atletico, who were forced to play their home leg over 3,000 kilometres from Madrid due to Spanish restrictions on arrivals from Britain to control the spread of COVID-19 infections.

Chelsea looked more likely to find a second goal than Atletico did an equaliser but Thomas Tuchel`s side will be without Mason Mount and Jorginho in the second leg at Stamford Bridge on March 17 as they will be suspended after being booked.

"We came here with strong intentions to win, play our game and we knew how to cause them trouble offensively," said match-winner Giroud.

"We have been strong at the back in the defensive shape and we`re very pleased with the win, it was a deserved win tonight."

Atletico keeper Jan Oblak said his side had been too anxious in attack but insisted their spirits remained high.

"In the dressing room I saw a team with its head held high and I`m convinced we`re going to improve," he said.

Atletico have led the La Liga standings for most of the season but have experienced a dip in form in February and went into Tuesday`s match smarting from a shock 2-0 defeat at home to Levante after drawing two of their previous three games.

Deprived of the usual raucous atmosphere they would normally expect for a European knockout game at the Wanda Metropolitano and forced to take a four-hour flight to the game, there was little sense of them having a home advantage.

They played with little ambition or intensity and could not manage a single shot on target to bother Chelsea keeper Edouard Mendy.

"I don`t think this is a crisis for us, it`s just a little different," added Oblak.

"In a difficult situation you see how strong a team really is and I`m sure we`re going to come out of this period and keep moving forward."

Chelsea played with more confidence and purpose and were only let down by their final pass.

Luckily for them, they could count on the improvisation of Giroud when Hermoso`s attempted clearance sent the ball looping backwards and within range of the Frenchman.

"I didn`t know what to think about the goal, I just focussed on hitting the overhead kick and was pleased to see it go in the back of the net, I had no clue about being offside," Giroud said.

"We know the importance of the away goal in European Cups so I was pleased to help the team win the game."