The Federal Open Market Committee (FOMC), on 3 November 2021, announced the unwinding of the policy accommodation provided by the Federal Reserve (Fed) in response to the Covid-19 pandemic. 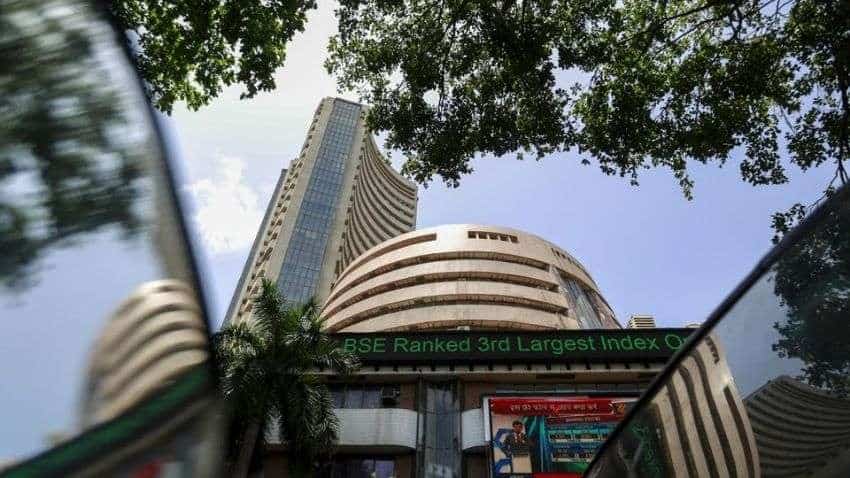 The Federal Open Market Committee (FOMC), on 3 November 2021, announced the unwinding of the policy accommodation provided by the Federal Reserve (Fed) in response to the Covid-19 pandemic.

In the FOMC statement, the Fed has announced its decision of beginning to reduce the monthly pace of its net asset purchases in stages- by USD 10 billion for Treasury securities and USD 5 billion for agency Mortgage-Backed Securities (MBS) starting later in November 2021.

US Fed’s act of reducing its money printing and buying fewer bonds is referred to as tapering. If the Fed continues with the pace of tapering as announced, it is expected to stop its bond-buying programme by mid-2022.

This means the Fed may opt for a reduction in the size of its balance sheet and gradually remove the monetary stimulus in the latter part of 2022. Moreover, the possibility of a hike in the federal funds rate in 2022 is strengthened, which was brought down to near-zero levels (0-0.25%), from 1.5-1.75% since 15 March 2020.

The Fed’s total assets nearly doubled to USD 8.68 trillion as of 24 November 2021 from USD 4.31 trillion on 11 March 2020 (Chart 1). The Covid-19 stimulus by the US Fed has been aimed at fostering smooth market functioning and accommodative financial conditions in the Covid-hit economy. 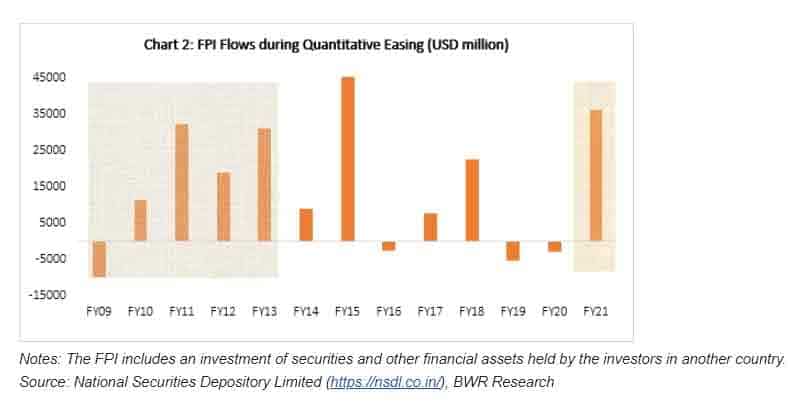 Given the fact that emerging economies like India were the recipients of large amounts of capital during the stimulus period, they were also the ones most exposed to the reversal of capital flows.

Considering that about one-third of India’s total AUC of FPIs is from the USA, the possibility of any reversal in US investments from India may have its consequences on Indian markets.

For instance, in 2013, India was one amongst the Fragile Five countries (Turkey, Brazil, India, South Africa and Indonesia) that were more prone to currency risks due to their excessive dependence on portfolio flows, coupled with large current account deficits.

The first hint or indication of tapering by the Fed on 22 May 2013 resulted in a huge plight of capital from emerging market economies including India and the sharp depreciation of their currencies, although the actual tapering only began in January 2014.

The Indian currency depreciated to Rs 63.8 per USD in September 2013 from Rs 55 per USD in May 2013 as Indian markets saw portfolio outflows worth USD 13 billion in just three months (June to August 2013).

The tapering decision is also on the expected lines as the Fed had given enough hints about the beginning of unwinding in its September FOMC statement.

A higher reserve cover, accompanied by a comfortable current account position, provides a cushion against any potential impact of a global shock. Current account balances as a share of the GDP (0.9% in FY21) are much stronger now compared to 2013.

There is a sharp rebound in economic activity after the lifting of the lockdown restrictions, including strong corporate earnings. The economy has recovered faster and has seen 20.1% growth in its GDP in Q1FY22 and 8.4% in Q2 FY22 and is expected to grow at 10-10.5% in full fiscal 2022.

As per the IMF’s October 2021 report on Word Economic Outlook, India will be among the fastest-growing large economies in the world, both in FY22 and FY23.

India too is faced with the risk of inflation breaching the comfort zone, though to a considerable extent, this is due to supply factors. The average annual inflation rate in India remained above the upper target of the RBI MPC at 6.16% in 2020-21; yet, the RBI continued to hold key policy rates low to nurture growth recovery.

The REER of the Indian rupee has appreciated against a basket of 40 currencies, owing to both appreciation in nominal terms and higher domestic inflation differential vis-à-vis trading partners in 2021 (up to October 2021).
Returns on Indian bonds continue to remain attractive among the emerging market economies, increasing the chances of sustained foreign capital inflows from abroad.

The high bond yield and rising inflation have prompted the Fed to announce the reduction in the bond purchase programme beginning November. While this is likely to decelerate capital inflows due to the reduction in the interest rate differential, the adverse consequences are likely to be much less than the taper tantrum of 2013, when India was considered to be grouped in the fragile five countries.

The taper tantrum in 2013 resulted in significant capital outflows and raised the inflation rate and plunged the economy into an unstable phase. However, this time, India is better placed to face external instability because of a significant volume of foreign exchange reserves and a much better current account position.

The internal problems too can be weathered without much disruption as the inflation rate is within the comfort zone, though the recent supply bottlenecks, elevated international crude oil prices and raw material costs have created some discomfort.

The RBI too may start draining out excess liquidity in the system sooner than later to manage inflationary threats, but the chances of interest rate hikes is unlikely in the current fiscal. Hence, we expect that the consequences of the fed tapering on Indian financial markets is not likely to be as concerning as it was in 2013.

The strong fundamentals of the domestic economy and its resilience to withstand the external vulnerabilities are expected to keep the economic activities intact without derailing the recovery progress.