It's pretty hard to believe about a massive 1100 per cent rise in share price of this company that too when reason is not the company's performance. 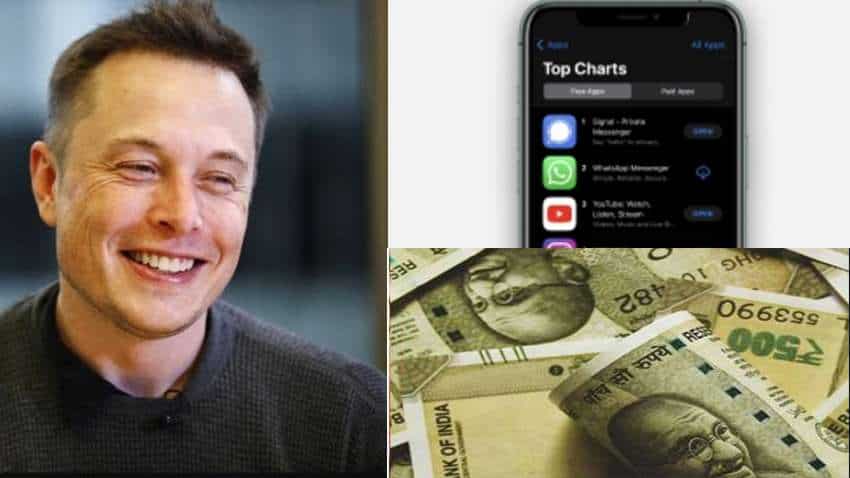 "The company now has a market cap of $660 million, up from $55 million two days ago." Pics from IANS and Pixabay.
Written By: Prashant Singh
Edited By: Harish Dugh
RELATED NEWS

Tesla in India: Anil Singhvi reveals what Elon Musk's company will do to EV market; highlights 3 things to watch

-With Tesla CEO Elon Musk telling his followers to use encrypted messaging app Signal, shares of an obscure, but unrelated company called Signal Advance surged a massive 1,100 per cent as some people bought that stock.

- The stock surged 527 per cent on Thursday and another 91 per cent on Friday, jumping from 60 cents to $7.19, IANS reported. The store price of Signal Advance multiplied 12-fold in two days. Signal Advance is so small that it doesn't report financials with the US SEC, till this happened.

-As far as encrypted messaging app Signal was concerned, it saw a significant surge in new users signing up for its platform after Musk, the world's richest person, tweeted to his 41.5 million followers to use Signal and apparently shun WhatsApp.

- Signal tweeted after people started investing in a different company with similar name: "Is this what stock analysts mean when they say that the market is giving mixed Signals? It's understandable that people want to invest in Signal's record growth, but this isn't us. We're an independent 501c3 and our only investment is in your privacy."

Signal began to witness a spike in downloads after users worldwide started receiving popups, asking them to agree to its revised policies before February 8 or lose their account.

Cross-platform encrypted messaging service, Signal had climbed to the top spot in the free apps category of the App Store in multiple countries, including India. The official Twitter handle of Signal on Saturday shared a screenshot, showing it placed above WhatsApp at the top spot in India. "Look what you have done," it tweeted. Along with India, it became the top downloaded app in Germany, France, Austria, Finland, Hong Kong, and Switzerland as well.

This is not the first time such a thing has happened.

In April 2019, when Zoom Video Communications held its market debut under the ticker symbol ZM, a Chinese company named Zoom Technologies jumped more than 80 per cent in two hours of trading.

Tesla in India: Anil Singhvi reveals what Elon Musk's company will do to EV market; highlights 3 things to watch