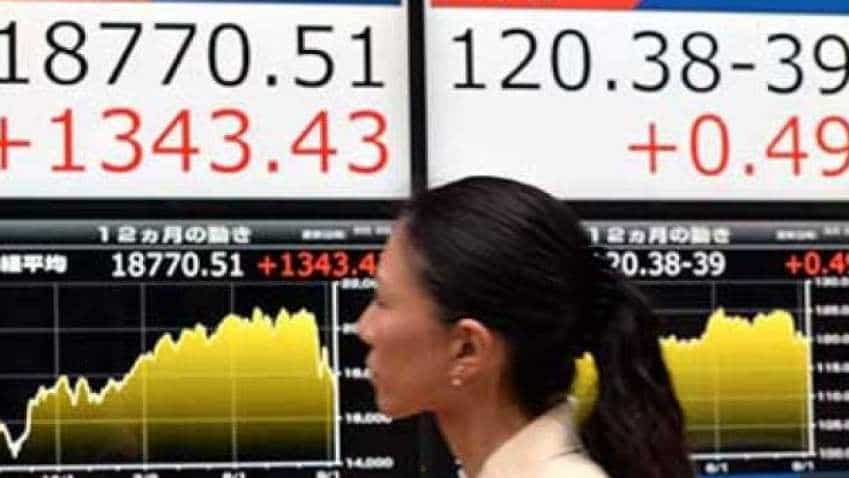 Asian stocks tracked Wall Street losses on Thursday as rhetoric from Beijing and Washington over trade matters kept alive investor concerns about the tariff war`s impact on global economic growth. The risk aversion propped up global safe-haven assets such as government bonds, with yields on German benchmark debt approaching record lows. The dispute between the world`s two largest economies showed few signs of abating, with Chinese newspapers reporting that Beijing could use rare earths to strike back at Washington after U.S. President Donald Trump remarked he was "not yet ready" to make a deal with China over trade.

Japan`s Nikkei was down 0.5% and Australian stocks shed 0.66%. MSCI`s broadest index of Asia-Pacific shares outside Japan stood little changed after slipping to a four-month low the previous day.
"The equity markets are in the midst of pricing in a long-term trade war, with participants shaping their portfolios in anticipation of a protracted conflict," said Soichiro Monji, senior strategist at Sumitomo Mitsui DS Asset Management. "The upcoming G20 summit could provide the markets with relief, as the United States and China could use the event to begin negotiating again over trade." The G20 meeting is set for June 28-29 in Japan.

Amid the flight-to-safety Germany`s 10-year bond yield fell to a three-year trough of minus 0.179% overnight. A drop below minus 0.200% set in 2016 would take the yield to a record low. Spanish and Portuguese 10-year yields fell to record lows as deeply negative German Bund yields have encouraged investors to look elsewhere for returns.  Elsewhere, the 10-year U.S. Treasury yield stood at 2.267% after falling to a 20-month low of 2.210% on Wednesday. Lower Treasury yields not withstanding, the dollar index against a basket of six major currencies was steady at 98.139 following two straight days of gains, with the greenback serving as a safe haven.

The euro was a shade higher at $1.1141, pulling back slightly following three successive days of losses. The dollar was little changed at 109.615 yen after bouncing back from a two-week low of 109.150 brushed on Wednesday. Oil prices rose modestly following volatile trading on Wednesday, when they fell to near three-month lows at one point as trade war fears also gripped the commodity markets.
U.S. crude futures were up 0.43% at $59.06 per barrel after brushing $56.88 the previous day, their lowest since March 12. Trade worries have weighed on oil but supply constraints linked to the Organization of the Petroleum Exporting Countries` output cuts and political tensions in the Middle East have offered some support.