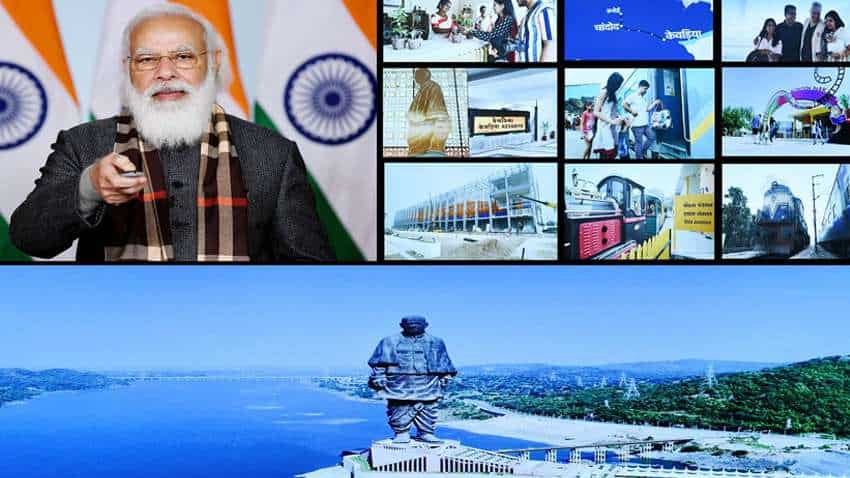 These trains will facilitate seamless connectivity to the Statue of Unity. PIB pic.
Written By: Prashant Singh
Edited By: Harish Dugh
RELATED NEWS

Prime Minister Narendra Modi on flagged off 8 new trains from various destinations to Kevadiya through video conferencing. These trains will facilitate seamless connectivity to the Statue of Unity. PM Narendra Modi said that perhaps for the first time in the history of Railways trains have been flagged off for the same destinations from different corners of the country. He explained that this is because of the importance of Kevadiya as home to Statue of Unity and Sardar Sarovar.

Here are details and FULL LIST of trains connecting Kevadiya to Eastern, Western, Northern, Central & Southern parts of India are as below:

In addition to the above 8 trains which are being flagged off, the following trains will also commence their services:-

- Express trains are being run with LHB coaches. Janshatabdi Express has been provided with latest
- “Vistadome tourist coach”, which is first time on Indian Railways. This coach will provide a panoramic view of the skyline.

- IRCTC has also doled out a basket of economical tour packages to cater tourists to the Statue of Unity as well as to experience the wonders of vibrant Gujarat.

- Also, a Budget Hotel with a capacity of 500 rooms is being constructed by IRCTC near Kevadiya station for the convenience of tourists.

- A 12 feet tall replica of 'Statue of Unity' is installed at the prime location of station circulating area. It is also designed by the same sculptor Shri Ram V. Sutar who designed & created the Statute of Unity.