It is a big transportation boost as Prime Minister Narendra Modi flagged off eight trains connecting different regions of the country to Kevadiya  in Gujarat on Sunday, via video conferencing. 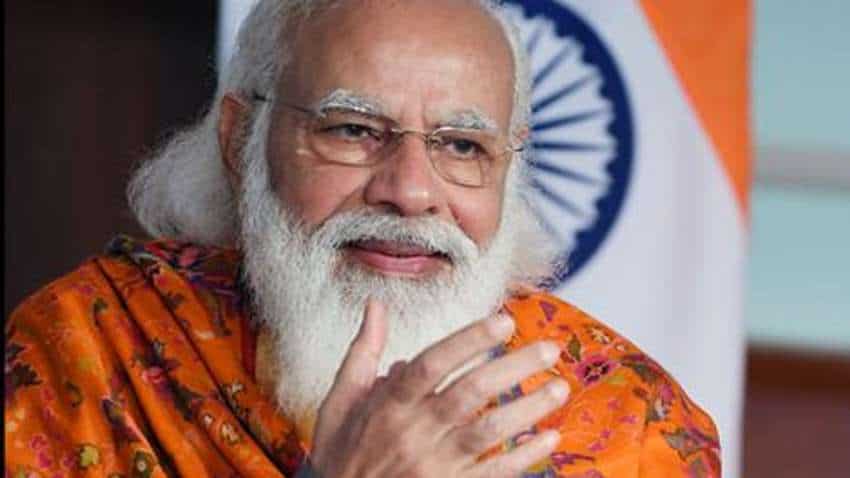 These trains will facilitate seamless connectivity to the Statue of Unity. PIB pic.
Written By: Prashant Singh
RELATED NEWS

It is a big transportation boost as Prime Minister Narendra Modi flagged off eight trains connecting different regions of the country to Kevadiya  in Gujarat on Sunday, via video conferencing. These trains will facilitate seamless connectivity to the Statue of Unity. The Prime Minister also inaugurated the Dabhoi – Chandod Gauge converted Broad Gauge railway line, Chandod – Kevadiya new Broad Gauge railway line, newly electrified Pratapnagar – Kevadiya section and the new station buildings of Dabhoi, Chandod and Kevadiya. Chief Minister of Gujarat and Union Railways Minister were present on the occasion.

1st time in the history of Railways

The Prime Minister said that, perhaps, for the first time in the history of Railways, trains have been flagged off for the same destinations from different corners of the country. He explained that this is because of the importance of Kevadiya as home to Statue of Unity and Sardar Sarovar. Today’s event exemplifies the vision of railways and mission of Sardar Patel.

Mentioning that one of the Kevadiya bound train is originating from Puruchi Thaliaivar Dr MG Ramachandran Central Railway Station, the Prime Minister paid tribute to Bharat Ratan MGR on his Birth Anniversary. Modi praised his accomplishments on film screen and political platform. He noted that MGR’s political journey was dedicated to poor and he worked tirelessly for a dignified life of the down-trodden. The Prime Minister said that we are working to fulfil his ideals and recalled how the grateful nation renamed Chennai Central Railway station after MGR.

New chapter in the development of Kevadiya

The Prime Minister, pointed out the new connectivity between Kevadiya and Chennai, Varanasi, Rewa, Dadar and Delhi along with MEMU service between Kevadiya and Pratapnagar and broad gauging of Dabhoi-Chandod and new Line between Chandod- Kevadiya will script a new chapter in the development of Kevadiya. This will benefit both the tourists and local Adivasis as this will bring new avenues of self-employment and employment. The railway line will provide  connection to the places of faith like  Karnali, Poicha and Garudeshwar on Narmada.

Continuing with the development journey of Kevadiya, the Prime Minister asserted that Kevadiya is no longer just a small block in some remote area, it has come up as a one of the biggest tourist destination of the world.

The Prime minister informed that Statue of liberty is attracting more tourist than even Statue of Liberty. More than 50 lakh visitor have come to see the Statue of Unity after it was dedicated to the nation and it is catching on after staying closed during the Corona months. It is estimated, as the connectivity improves, about one lakh visitors per day are expected in Kevadiya. Kevadiya as a good example of planned development of economy and ecology while protecting environment, said the Prime Minister.

Kevadiya has transformed into a complete family package with all amenities

The Prime Minister said that it used to appear like a pipedream when, initially, Kevadiya was proposed as major tourist destination. Given the old way of working, this scepticism had a logic as there was no connectivity of roads, nor street lighting, rail, tourist accommodation. Now Kevadiya has transformed into a complete family package with all amenities. Attractions here include, grand Statue of Unity, Sardar Sarovar, vast Sardar Patel Zoological Park, Arogya Van and Jungle Safari and Poshan Park. It also has Glow Garden, Ekta Cruise and water sports.

The Prime Minister said due to increasing tourism, Adivasi youth is getting employment and local people are getting modern amenities. There are new opportunities for local handicrafts items in the Ekta Mall. He also mentioned that about 200 rooms are being developed for Home Stay in the Adivasi villages

The Prime Minister also talked about the Kevadiya Station which has been developed with growing tourism in mind. It has Tribal Art Gallery and Viewing Gallery from where Statue of Unity can be glimpsed.

The Prime Minister dwelled at length on the transformation of Indian Railways through goal-centric effort. He said that apart from traditional role of passenger and goods transportation, railways is giving direct connectivity to places of tourism and religious importance. He said many routes including Ahmedabad- Kevadiya Janshatabdi will have attractive ‘Vista-Dome Coaches’, Prime Minister's Office said in a statement.

The Prime Minister also outlined the change in approach for developing railway infrastructure. He said that earlier focus was limited to keeping the existing infrastructure running and there was little attention on new thinking or new technology. It was imperative to change this approach. In the recent years,  work was done on comprehensive transformation of entire railway system and it wasn’t limited to tinkering with budget and new train announcements. The transformation took place on many fronts. He gave example of the present project of connecting Kevadiya where multi-pronged focus led to completion of the task in record time.

The Prime Minister also presented Dedicated Freight Corridor as an example of change in approach from earlier times. The Prime Minister dedicated the Eastern and Western Dedicated Freight Corridors recently. This project was under progress and between 2006-2014 work was done only on papers with not even a single kilometer track laid. Now a total of 1100 Kilometer are about to be completed in next few days.

Prime Minister also elucidated on new connectivity as unconnected parts of the country are being connected. Speed of broad gauging and electrification has gained momentum and tracks are being prepared for higher speed. This has enabled running of semi high speed trains and we are moving towards high-speed capabilities, for this budget has been enhanced manifold, said the Prime Minister.

The Prime Minister also pointed out that it is being ensured that railways remains environment -friendly. Kevadiya Station is India’s first railway station to start with green building certification.

Importance of aatmnirbharta in railway

He also stressed the importance of aatmnirbharta in railway related manufacturing and technology which is yielding good results now. It was due to local manufacturing of high horse power electric locomotive that India could launch the world’s first double stacked long haul container train. Today a series of indigenously manufactured modern trains are part of Indian Railways, Said the Prime Minister.

The Prime Minister stressed the need for skilled specialist manpower and professionals to meet the requirement of the railway transformation. This need drove the establishment of Deemed Railway University in Vadodara. India is one of the few countries to have an institute of this stature. Modern amenities for rail transport, multi-disciplinary research, training are being made available. Talented youth from 20 states are being trained to steer the present and future of railway. This will help in modernizing railway through innovation and research, concluded the Prime Minister.