In fact, there has been a three-fold increase in property prices in Ayodhya since last year. 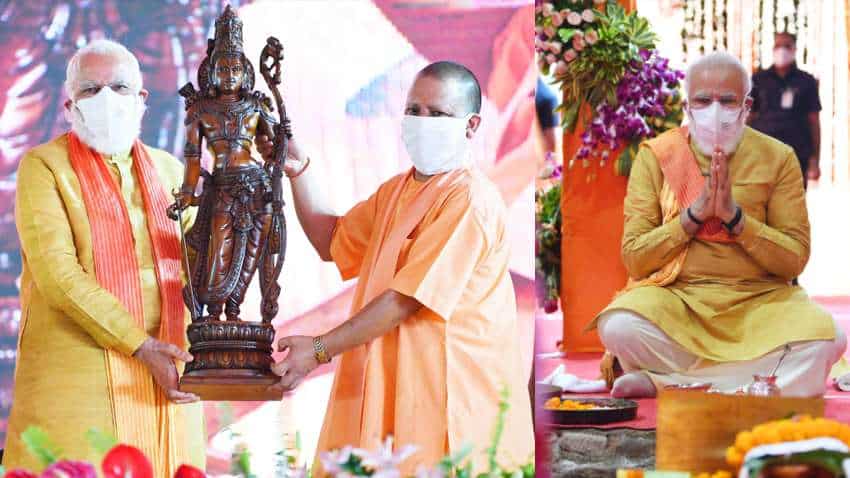 The wait of centuries ended when Prime Minister Narendra Modi on August 5 this year performed the bhoomi pujan of Ram temple in Ayodhya. Pics from https://www.narendramodi.in/
Written By: Prashant Singh
Edited By: Harish Dugh
RELATED NEWS

Property rates started rising in the district last year after the Supreme Court paved the way for the construction of the temple at the site. And the prices have shot up since the 'bhoomi pujan' ceremony in August this year. Property prices went up by 30-40 per cent after the Supreme Court verdict in November last year and have doubled on top of that since the 'bhoomi pujan' ceremony by Prime Minister Narendra Modi on August 5 this year.

What has further contributed to the exponential rise in prices is limited availability of real estate as the government plans to acquire land for infrastructure projects befitting an international tourist destination.

In fact, there has been a three-fold increase in property prices in Ayodhya since last year.

In the heart of the town, availability of land is limited and the cost ranges between Rs 2,000 and Rs 3,000 per square foot. One could easily get land at Rs 1,000 per sq ft in the town before the Supreme Court verdict.

"Property rates are going sky high. We are observing that a lot of people, from big businessmen to commoners, want land in Ayodhya. Since the court verdict, Ayodhya has seen a real estate boom," Professor Vinod Kumar Shrivastava of Awadh University in Ayodhya said as per PTI.

Beginning his speech with Jai Siya Ram, prime minister had told the gathering that a grand temple will now be built for Ram Lalla, the infant Ram, who had been living in a temporary tent for years. Many people made sacrifices for the Ram temple. I pay my respects to all of them," the prime minister said in the speech that followed the laying of the foundation for the Ram temple.
Sending out the message that "Ram is everywhere, Ram belongs to all", Modi said the temple symbolises India's rich heritage and will be an inspiration to all of humanity. Despite efforts to eradicate Lord Ram's existence, he lives in our hearts and is the basis of our culture, Modi had said.

Citing Lord Ram's message, Modi said the more powerful India gets, the more it will be loved and remain peaceful. "Social harmony was the core principle of Lord Ram's governance," the prime minister had said. The construction of the Ram temple is an instrument to unite the country, he said, adding that it will lift the economy of the entire region.

"We have to join stones for the construction of Ram temple with mutual love, brotherhood," he said, asserting that everyone's sentiments have to be taken care of.