India will try to restart a good percentage of international passenger flights before August, Civil Aviation Minister Hardeep Singh Puri on Saturday said, three days after announcing resumption of domestic flights from May 25. 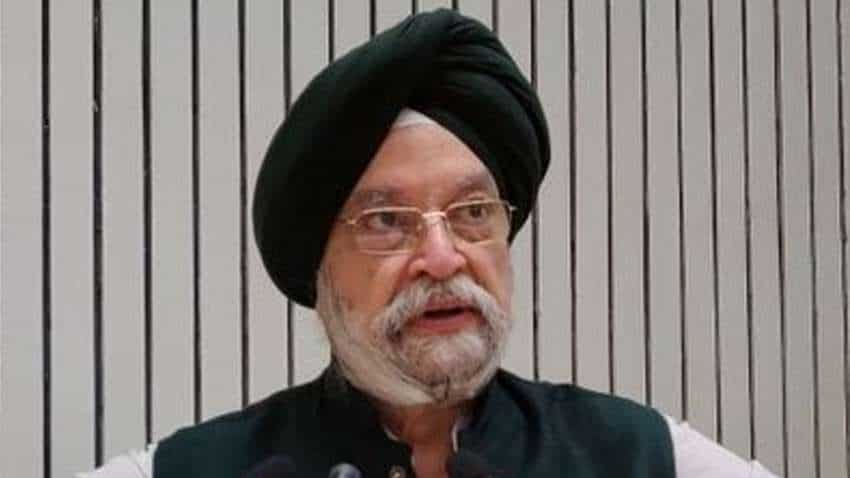 The minister, while addressing a Facebook Live session, clarified again that the app is not mandatory for air passengers and they can instead give a self-declaration form. Photo from Twitter of Puri.
Written By: PTI
RELATED NEWS

Real estate alert! What can restore buyer-seller trust? Modi government has the answer

India will try to restart a good percentage of international passenger flights before August, Civil Aviation Minister Hardeep Singh Puri on Saturday said, three days after announcing resumption of domestic flights from May 25.

While various states like Karnataka and Maharashtra announced their respective quarantine measures for passengers coming there through domestic flights, the minister said there was no need for quarantine if a passenger is showing green status on Aarogya Setu app.

The minister, while addressing a Facebook Live session, clarified again that the app is not mandatory for air passengers and they can instead give a self-declaration form.

Amid the coronavirus pandemic, few states have questioned the necessity to restart domestic services from Monday, he admitted, adding that some hesitation was expected even as the Centre has been trying to meet their concerns.

Puri said during the session, "I can't put a date on it (restarting international flights). But if somebody says can it be done by August or September? My response is why not earlier depending on what is the situation."

When asked about the minister's announcement on resuming international services, Vistara said it will await instructions and guidelines from the Civil Aviation Ministry. Other airlines did not respond to PTI when asked about this matter.

"We must have a more ambitious goal (regarding international flights). Why not start them by mid-June or June-end or in July," he added.

All scheduled commercial passenger flights have been suspended in India since March 25 when the Modi government imposed a lockdown to contain the coronavirus pandemic.

The minister said that the Vande Bharat Mission, which began on May 7, would be able to bring a total 50,000 Indians, who have been stranded abroad, home by the end of this month.

Between May 7 and May 21, around 23,000 Indians have been repatriated through flights operated by Air India and its subsidiary Air India Express under this mission. Passengers have to pay money to book a seat on any repatriation flight being operated under the Vande Bharat Mission.

Puri said India is planning to bring stranded Indians from Sri Lanka through ships or flights under the Vande Bharat Mission.

The minister said if some passengers do not have smartphones, it is not as if they will not be allowed to travel for they do not have the Aarogya Setu app.

"We have said it is an advisory, it is preferable...If you do not have the Aarogya Setu app, you can give a self-declaration form," he stated.

"If someone has Aarogya Setu app, it is like a passport. If you have green status, why should anybody want any quarantine," Puri said.

The app gives colour-coded designation to users as per their health status and travel history. It helps the user know if he or she is near anyone who has tested positive for the deadly virus.

Incase a passenger does not have the app, he or she can get tested for the virus two or three days before the flight's departure, get a medical certificate, and just fill in the form that he or she is COVID-19 negative, Puri noted.

"If you haveA arogya Setu app, and if you have got yourself tested for COVID-19 and have been found negative, and if you do not show any symptoms, then I think there is no need for quarantine," he said.

With the spike in COVID-19 cases weighing heavily upon it, senior officials of the Tamil Nadu government have expressed concerns about resumption of domestic flights from May 25.

While most states are ready, Puri said few states have talked to his "senior colleagues (ministers) and questioned the necessity of restarting domestic flights so soon".

The minister said during the session, "They said the Centre should delay it further by 2-3 days. So, they (ministers) asked the states to send the concerns in writing. But the states did not."

"This will keep going on. When we are dealing with a situation like this, we should expect that there would be some hesitation. But it is our (Centre's) responsibility and we should make efforts to make those concerns.

Real estate alert! What can restore buyer-seller trust? Modi government has the answer