Why onion prices are bringing tears to farmers'' eyes

According to the Food Ministry, on Thursday, onions were sold for Rs 27 per kg in Delhi, for Rs 22 in Mumbai, for Rs 25 in Kolkata and for Rs 16 in Chennai. The retail prices were higher by Rs 2-5 last week. 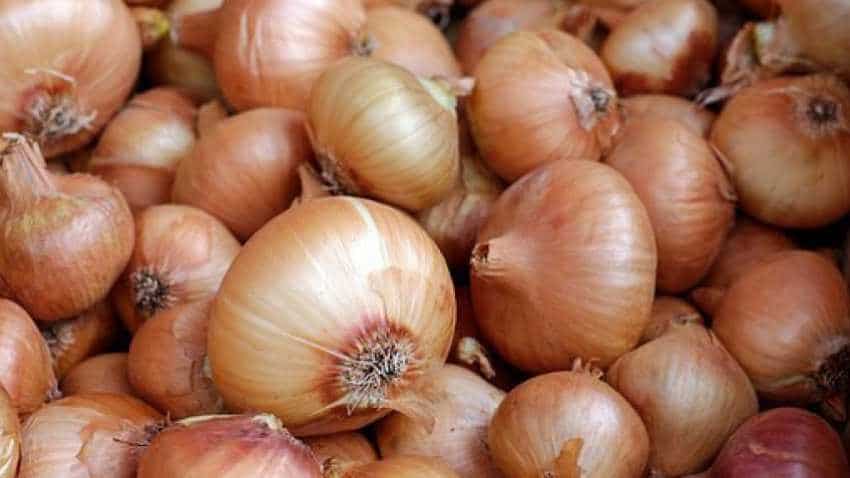 According to the Food Ministry, on Thursday, onions were sold for Rs 27 per kg in Delhi, for Rs 22 in Mumbai, for Rs 25 in Kolkata and for Rs 16 in Chennai, Image source: Pixabay
Written By: IANS
RELATED NEWS

The Narendra Modi government may have promised to double farm incomes by 2022, but farmers in the country`s onion-growing regions are appalled at the bizarre market dynamics that keep its retail price hovering between Rs 20-30 a kilogram while they struggle to get even 10-20 per cent of the final cost.

The constant fall in prices and subsequent lower remuneration in the past few weeks has led to outbursts and protests where farmers have thrown tonnes of onions on roads, while one farmer made national news by sending his meagre returns to Prime Minister Narendra Modi.

Onion farmers blame the government and its arbitrary policies on exports and procurement for their plight.

According to the Food Ministry, on Thursday, onions were sold for Rs 27 per kg in Delhi, for Rs 22 in Mumbai, for Rs 25 in Kolkata and for Rs 16 in Chennai. The retail prices were higher by Rs 2-5 last week.

At Nashik`s Lasalgaon, the country`s largest wholesale market for onions, prices for onions harvested in summer have fallen to Rs 100-300 per quintal while fresh arrivals have managed to get an average of Rs 800-1,000 per quintal.

Notably, the input cost for cultivation of a kilo of onions has been fixed at Rs 8.50 by the Directorate of Onion and Garlic Research (DOGR), a constituent body of the Indian Council of Agricultural Research (ICAR).

Sanjay Sathe, an onion grower from Nashik, came into the limelight a few days ago after he sent a money-order of Rs 1,064 to Modi as a mark of protest.

"I did not sell a part of onions I cultivated this summer due to the prevailing low prices. However, I was forced to sell it now as I had no money. I was shocked when I received just Rs 1,064 for 750 kg," Sathe said.

"I paid Rs 400 to clean those onions and Rs 750 for transportation. So what I have been left with in the end? Nothing!"

Aghast at the gloomy side of the market dynamics, Sathe sent the money-order to awaken the government to the situation. Last year, he sold onions at Rs 3,000 per quintal. He says the authorities do not have an answer for the sharp slump in prices this year.

Anoop Kumar, Principal Secretary of Maharashtra`s Marketing Department, said the onion crop that hits the market in winter has a short shelf life, which may have led to the low procurement price.

"We are aware of the low prices. We have operationalised a scheme to provide 50 per cent subsidy on the transportation if onions are sold in other states," Kumar told IANS.

The situation is similar in other onion-producing states like Madhya Pradesh, Karnataka and Rajasthan.

Farmer activist Kedar Sirohi said the remuneration to onion growers in poll-bound Madhya Pradesh and Rajasthan has fallen to as low as Rs 1 per kg.

"Due to the advancement in transportation and communication, prices remain more or less the same in the adjoining states. In Neemuch (in Madhya Pradesh), one farmer received just Rs 2,300 for 2,100 kg of onion he sold on Wednesday. So, roughly, Rs 1 per kg," said Sirohi, who is the president of the Aam Kisan Union.

"There have been so many flip-flops on the export policies in last few years that we have lost credibility in the international market. There is now greater demand for onions from Pakistan," said Holkar.

"Also, the government procured a huge amount of onions though the NAFED (National Agricultural Cooperative Marketing Federation) last year. It sent a wrong signal in the market that there is no demand," said Holkar.

Around 8,31,645 tonnes of onions have been exported since April this year.

Holkar asked for an increase in the incentives for onion exports under the Merchandise Export from India Scheme (MEIS) from the current five per cent to 10 per cent.

Sathe said he received a call from a Maharashtra government official seeking details about his land and crop yield and if he was a part of any political outfit.

"There was just a phone call. I do not know who it was, except that it was a government official. Nothing has happened since then," he said.

A senior Agriculture Ministry official said cognisance had been taken of the situation but no decision has been taken so far.

The ministry cannot intervene until a state approaches it for implementing the Market Intervention Scheme (MIS), which is designed to protect farmers from making distress sales, said the official, who requested anonymity.