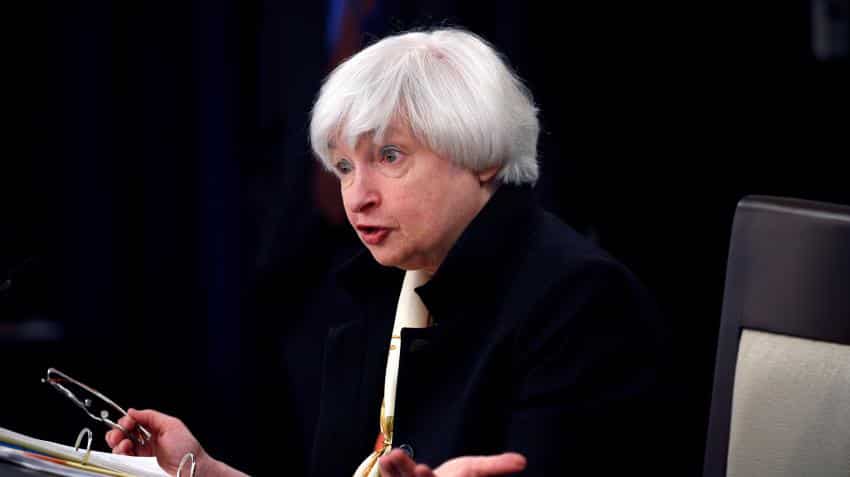 The US Federal Reserve left interest rates unchanged on Wednesday but strongly signaled it could still tighten monetary policy by the end of this year as the labour market improved further.

The Fed said US economic activity had picked up and job gains were "solid" in recent months, Reuters reported.

The latest move by the US central bank will now set the tone for stock markets worldwide including that of Indian markets in the coming months.

The Bank of Japan (BoJ) in its monetary policy meet on Wednesday maintained a status quo and reassured the markets that it would continue to buy large amounts of bonds and riskier assets.The news from the Japan's central bank resulted in rise in shares of Indian stock markets on Wednesday.

"The case for an increase in the federal funds rate has strengthened," the news agency said citing the US central bank as saying in a statement following a two-day policy meeting.

It added that its rate-setting committee had decided against raising rates "for the time being," until there was more evidence of progress towards its employment and inflation objectives.

As projected by Care Ratings earlier on Wednesday, the US Federal Reserve followed Bank of Japan's (BoJ) latest monetary policy move to hold interest rates in its meeting.

The ratings agency in its report had said that if the US Federal Reserve decides to hold rates, it would put the US Fed on the same lines with the Bank of England (BoE) and the European Central Bank(ECB), where both kept interest rates at historic low levels in their recent meetings.

It had projected that the US central bank is more likely to maintain its status quo and will not go in for any interest rate hike this time as it may wait for some more time for the economy to recover.

So, what will happen to India as the US Fed has kept interest rates unchanged?

On the FII inflows, the ratings agency has said that US Fed's decision to hold rates will be positive for foreign institutional investors (FIIs) as the flows would continue in the normal course.

"Higher interest rates will cause a reversal of such FII flows in the short run, though the Indian market is still attractive and would continue to receive equity inflows. Debt would more likely be affected as the tendency for lower rates in India and higher rates in the US could lower the spread which can cause a slowdown in inflows," said Care Ratings economists Madan Sabnavis, Anuja Shah and Anushka Sawarkar in a report.

On the Indian stock markets, the three economists said that they expect the market to stabilise and remain less volatile.

As far as its impact on the country's exchange rate is concerned, Care Ratings economists have estimated the rupee to revert to normal and remain steady against the US dollar, consistent with steady FII inflows thus ironing out volatility in the market.

"However, some volatility can be expected before all US Fed meetings as future rate hikes have been kept open-ended. Fundamentals like outflow of foreign currency non-residential (FCNR) bank deposits would tend to be the driving factor for us," they further added.

The US decision to hold rates will give some room for the Reserve Bank of India (RBI) to raise interest rates which is less likely to affect the country's foreign portfolio investor (FPI) inflows.

"RBI is closely monitoring the US Fed movements given the possible effect on the exchange rate. Assuredly, the RBI will put more weight on domestic inflation and the FCNR outflows. However, no change in the rates by the US Fed would offer some space on interest rates to the extent that FPI flows would remain unaffected. Otherwise, this factor would also play at the back of the mind," said the three economists of Care Ratings in the report.

When the US Fed will hike interest rates?

The US Federal Reserve chair Janet Yellen will hold two more monetary policy meetings this year, one on November 1 to 2 and the last one on December 13 to 14.

The central bank's November meeting is less likely to see any hike in interest rate as it will be held before the US elections, cited the Care Ratings economists.The bank is likely to raise interest rate in December this year, they added.