UN applauds India for its "invaluable" contribution to peacekeeping

The United Nations has lauded India's "invaluable" contribution to its peacekeeping missions,  commending  the Indian uniformed men and women for their inspirational service to the cause of peace. 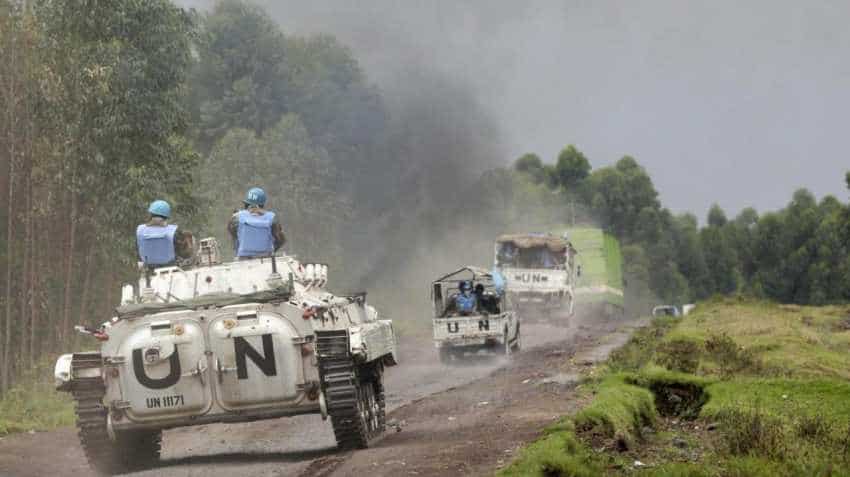 The campaign is aimed at expressing the world body's gratitude to UN peacekeepers as well as to the countries who are sending their uniformed men and women to serve in the peacekeeping missions. Image source: Reuters
Written By: PTI
RELATED NEWS

The United Nations has lauded India's "invaluable" contribution to its peacekeeping missions, commending the Indian uniformed men and women for their inspirational service to the cause of peace. "UN peacekeeping operates in increasingly complex environments and we are grateful for steadfast partners like India, who have risen to new challenges and continue to participate meaningfully in our efforts to protect vulnerable civilians," Under-Secretary-General for Peacekeeping Operations, Jean-Pierre Lacroix, said.

The UN's Department of Public Information (DPI) is carrying out a major communications campaign titled 'UN Peacekeeping ? Service and Sacrifice' during the 70th anniversary year of UN Peacekeeping. The campaign is aimed at expressing the world body's gratitude to UN peacekeepers as well as to the countries who are sending their uniformed men and women to serve in the peacekeeping missions.

The campaign, which is carried out on a country-by-country basis, this week recognises India, the largest contributor to UN Peacekeeping and which has also suffered the most fatalities. The campaign includes posts on social media about India's role in peacekeeping, You Tube videos and a photo essay. "From protecting civilians, disarming ex-combatants and helping countries transition from conflict to peace, Indian men and women in uniform have served the cause of peace from the earliest years of United Nations peacekeeping and continue to do so in some of the most challenging missions," according to a special feature 'India and the UN: Celebrating 70 years of invaluable service to the cause of peace'.

The feature quoted Lacroix, as saying in a recent interview with UN News, that India's continued commitment to UN peace operations and to "global peace and security ? even through these difficult periods ? is invaluable." India's longstanding service has not come without cost; as of June this year, over 160 Indian peacekeepers have paid the ultimate price while serving with the United Nations.

"India has lost more peacekeepers than any other member state. We grieve with the families and the people and Government of India for these losses," Lacroix said. Lacroix had visited India in June as part of a wider trip to the sub-region during which he thanked the government and people of India for their service and sacrifice in the name of peace.
The campaign highlights a host of activities and initiatives undertaken by Indian peacekeepers while serving in some of the most challenging missions and complex environments, including providing free medical and veterinary treatment for the local community and their livestock, building roads, bridges and airstrips and other outreach events such as teaching Yoga.  India's deployment of an all women contingent to Liberia has also been hailed as being a role model to Liberian women and spurring other countries to boost their own deployment of female peacekeepers.

The campaign also lauds the service of Indian veterinarians serving with the UN Mission in South Sudan (UNMISS), who stepped up to help cattle herders who were losing much of their stock to malnutrition and disease in the war-torn nation. Colonel Gaurav Bhatra, who commands the 850-strong Indian battalion in South Sudan, considers such efforts "a normal part of Indian culture."

"Even in our country, we are sometimes called upon to assist in areas where it is extremely difficult to alleviate the suffering of the people. It is the nature of the Indian Army to step in any time when there is a need when we are on peacekeeping missions,? he said in the feature. More than 200,000 Indians have served in 49 of the 71 peacekeeping missions established around the world since 1948. Currently, there are around 6,700 uniformed peacekeepers from India, the vast majority of them in the Democratic Republic of Congo and in South Sudan.

India has also provided 15 Force Commanders to various missions, and was the first country to contribute to the Trust Fund on sexual exploitation and abuse, which was set up in 2016.

Rupee vs dollar in times of coronavirus: INR slips 32 paise to 75.21 amid scare