Lok Sabha election results 2019: Congratulating Prime Minister Narendra Modi on his election victory, a top American corporate leader has asserted that in the next five years, the PM will lay the groundwork for India's economic growth and prosperity for the next quarter century. 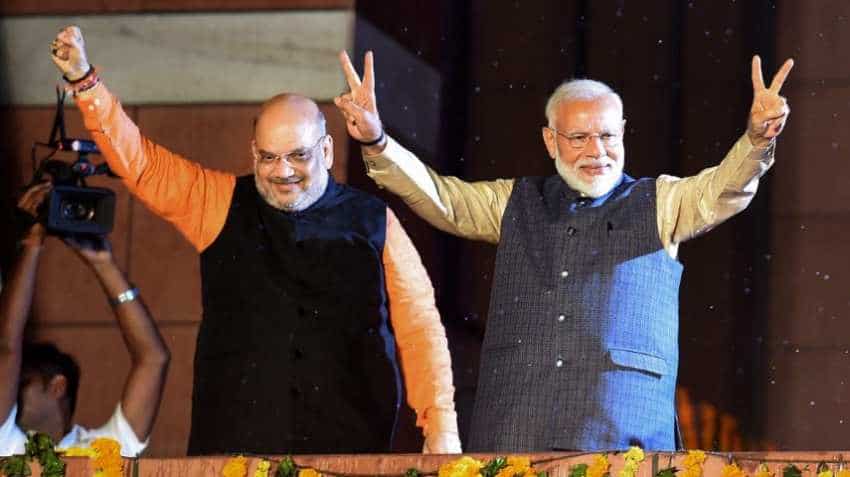 New Delhi: Prime Minister Narendra Modi flashes the victory sign along with the party President Amit Shah, as they arrive at the party headquarters to celebrate their victory in the 2019 Lok Sabha elections, in New Delhi, Thursday, May 23, 2019. PTI

Lok Sabha election results 2019: Congratulating Prime Minister Narendra Modi on his election victory, a top American corporate leader has asserted that in the next five years, the PM will lay the groundwork for India's economic growth and prosperity for the next quarter century. Prime Minister Narendra Modi on Thursday led his Bharatiya Janata Party to a super-sized victory for a second term in office, winning an absolute majority and on course to touch the 300-seat mark in the 543-member Lok Sabha. "Congratulations to Prime Minister Narendra Modi on a decisive election victory. These next five years of Prime Minister Modi's leadership will lay the groundwork for the next 25 years in terms of economic growth and prosperity for the country," John Chambers, Chairman of the Board of Directors at US India Strategic and Partnership Forum (USISPF), said.

Chambers said under Modi's leadership, India will be able to increase its GDP and see economic growth and job-creation, and improve trade and foreign investment.

"The future is bright for India and we at the US-India Strategic Partnership Forum look forward to boosting ties between the two countries like never before," Chambers said, reflecting the views of the American corporate sector, which is increasingly looking at India as an alternative to China when it comes to their manufacturing base.

Three-term Indian American Congressman Dr Ami Bera issued a statement congratulating the citizens of the country who participated in the elections over the past five weeks.

"These were the largest democratic elections ever and reflected India's commitment to its founding ideals. I also congratulate Prime Minister Modi on his victory and look forward to working with him and his government to advance the values and interests that bind our two nations," he said.

"As the longest serving Indian American in Congress, the future of our relationship remains, as ever, bright and enduring," Bera said.

Congratulating Modi, Richard Verma, former US Ambassador to India, said he was looking forward to the next chapter in the US-India relations, which remains the defining relationship of this century.

"And congrats to all who took part in this massive exercise in democracy - really something to behold," he added.