This is what PM Narendra Modi will do after Congress beats BJP in Madhya Pradesh, Rajasthan, Chhattisgarh?

Narendra Modi led Bharatiya Janata Party (BJP) lost power to the opposition Congress in three big heartland states, where agriculture is still a mainstay, according to vote counting on Tuesday. 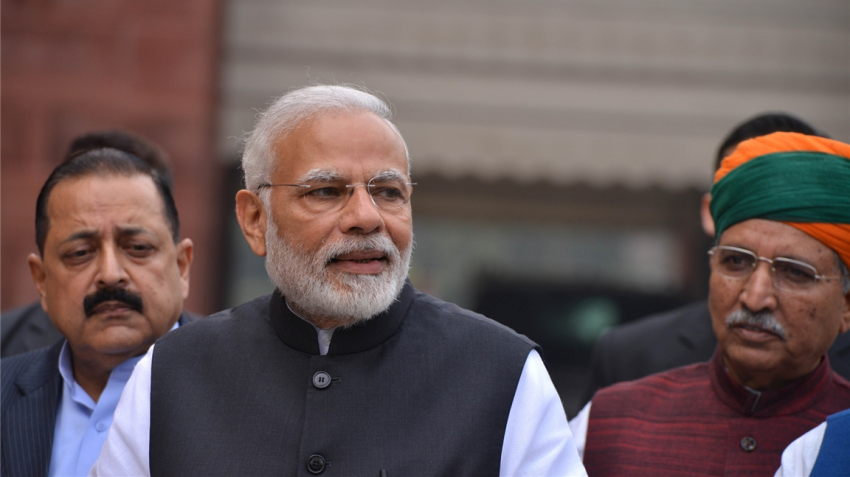 If the government finds very limited fiscal space, it could go for loan waivers only in a few geographies that have suffered extreme weather conditions, sources and analysts said. Image source: IANS
Written By: Reuters
RELATED NEWS

Congress single-largest party in Rajasthan with 99 seats, BJP gets 73

General election 2019: A stable govt in May can take Nifty to 13,000, says Kotak Securities

Prime Minister Narendra Modi government is likely to announce loan waivers worth billions of dollars to woo millions of farmers ahead of a general election, government sources said, after his ruling party, the BJP, suffered a rural drubbing in state polls.

Modi led Bharatiya Janata Party (BJP) lost power to the opposition Congress in three big heartland states, where agriculture is still a mainstay, according to vote counting on Tuesday.

To claw back support among India`s 263 million farmers and their many millions of dependents, Modi`s administration would soon start working out the details of a plan allocating money to write off farm loans, government sources said.

With a national election due by May 2019, Modi and the BJP have run out of time to announce other easy, popular measures such as raising the support, or guaranteed, prices for staples such as rice and wheat, farm analysts said.

"Elections are round the corner and you know that you`ve failed to fix the problems being faced by these farmers, so you will soon go to town promising agri-loan waivers," said Ashok Gulati, a farm economist who advised India`s last government on crop prices.

The plan could see as much as 4 trillion rupees ($56.5 billion) in loans written off, the government sources and analysts said.

Farm loan waivers would be the biggest help the government has ever provided to farmers, said the officials, who did not wish to be identified in line with government policy.

The previous Congress party-led coalition government announced farm loan waivers worth nearly 720 billions rupees in 2008, helping it return to power with a bigger mandate in 2009.

ANGRY FARMERS
Economists caution that farm loans waivers would widen a fiscal deficit the government has aimed to cap at 3.3 percent of its gross domestic product (GDP), or 6.24 trillion rupees.

Even without the farm loan waiver, some credit rating agencies have estimated the country`s fiscal deficit at 6.67 trillion - or 3.5 percent of GDP, on muted tax collections.

The loan waiver also risks deepening the malaise at public sector banks saddled with most of India`s $150 billion in stressed loans.

If the government finds very limited fiscal space, it could go for loan waivers only in a few geographies that have suffered extreme weather conditions, sources and analysts said.

The results announced on Tuesday were from elections that took place over the past few weeks in Rajasthan, Chhattisgarh and Madhya Pradesh, three large states in the Hindi-speaking northern belt that is the BJP`s traditional stronghold.

The BJP lost power in Madhya Pradesh after holding power there for 15 years."Tuesday`s election result clearly demonstrates farmers` anger against Modi and his administration," said.

Dharmendra Malik, a farm leader from Uttar Pradesh, India`s most populous state that borders all three.

The last time a BJP government lost power, in 2004, it was largely because rural voters abandoned the party. "Farmers very well know that the state governments don`t have the financial war chest to write off agricultural loans, so it`s only Modi`s government which can waive loans," Malik said.

Although farm loan waivers are a populist move, debt write-offs help only relatively well-off farmers with larger plots of land. India`s small farmers - 80 percent of the total - often cannot borrow from banks and turn instead to local money lenders who charge exorbitant interest of 25-50 percent.

Both the BJP and Congress have promised farm loan waivers in a number of state elections in the past few years. About seven state governments have promised to write off farm loans worth 1.8 trillion rupees.

Low food prices, export curbs, anti-inflation policies that keep rural incomes low and a broad shift from subsidies to investment spending under the pro-business Modi have all infuriated and demoralised farmers.

Both India`s capital New Delhi and Mumbai, the country`s financial hub, have been recent targets of protests by farmers, mirroring rising anger in the countryside where more than two-thirds of India`s 1.3 billion people live.

Other than writing off crop loans, the government would also try to step up purchases of farmers` produce, government sources said, without giving details.

Mahesh Salve, a wheat farmer from Madhya Pradesh, said he was counting on farm loan waivers. "I will vote for the party that will write off our loans," said Salve.

Congress single-largest party in Rajasthan with 99 seats, BJP gets 73

General election 2019: A stable govt in May can take Nifty to 13,000, says Kotak Securities