The process has started and can see the curiosity in it. As far as a response is concerned in just 8 days, practically it was launched in the presence of the honourable Prime Minister on May 18 but the process started on May 21-22, 2020, which means today is the eighth day. 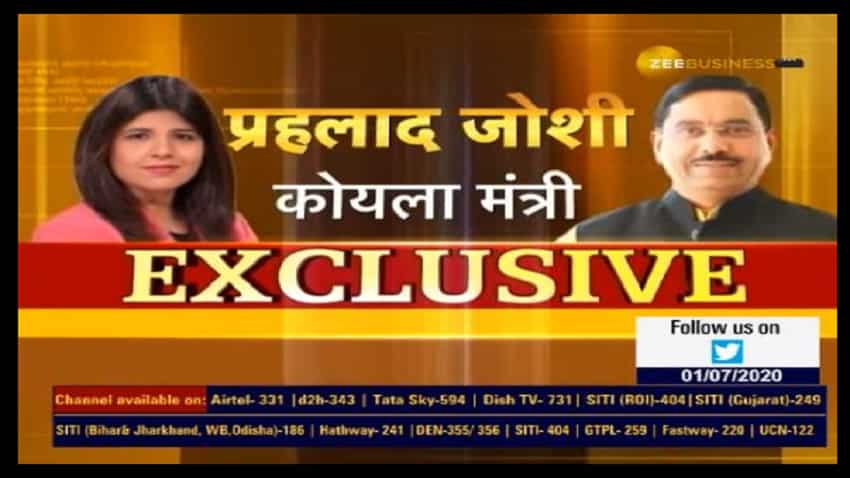 Coal India share price: Edelweiss give a BUY recommendation with price target of 186

A: The process has started and can see the curiosity in it. As far as a response is concerned in just 8 days, practically it was launched in the presence of the honourable Prime Minister on May 18 but the process started on May 21-22, 2020, which means today is the eighth day. In these 9 days, we have received 329 registrations and 26 tender documents have been sold, each of them is priced at Rs 5 lakh. And, 10 people reached to see the mines because we had an offer in which arrangements would have made for those who wished to see the mines. Besides, the technical session which was held after the process was launched by the Prime Minister was joined by 1,140 people of whom more than 60 participants are foreign players/ investors. This is the first commercial mine with the terms and conditions and selection of the mines blocks have been done through crowdsourcing. So, I firmly believe that we will be able to take out the coal that is lying under the earth and create an Atmanirbhar (self-reliant) India, which is a dream of Prime Minister. It will be done under his direction.

Q: The coal blocks will be provided to the private miners on the revenue sharing model against per tonne basis. How the government will be benefitted from it?

A: In the previous model, those who had the mines were supposed to pay an amount to the government whether the production was done or not. Under the new mechanism, those producing more and quickly will be incentivized, while those who are producing less will have to pay a fine. The previous mechanism was one-sided but the new one serves the purposes of both sides, i.e. we have done from both the sides in which if you do it well then you will get more incentives and if you don’t do it then you will not get whatever you are due to get. You will have to perform. One is revenue sharing is both performance-linked and revenue sharing as well. Thus, the terms are quite attractive and I think that this is the best and I have already mentioned that the terms and conditions are based on the feedback.

Q: A lot of people have raised the point that Coal India will have some trouble due to the scheme because private miners have been allowed, which will end the monopoly of Coal India. Do you think that this will hurt the business fundamentals of Coal India, if not, then why?

A: There is no such concern and I have said the same when I got the bill passed in the Lok Sabha and Rajya Sabha. Under the guidance of Prime Minister, the Finance Minister in her announcement has said that there will be at least 1 PSU in the strategic PSU and maximum 4, but there is only one PSU in this case. And, our power sector is a strategic sector and coal is required for power. That’s why we are promoting Coal India and strengthening it. The government is investing a large amount in Coal India and has provided coal blocks, which can help them in running their business for next 100 years; even they mine 3 billion tonnes of coal per year. They have so many coal blocks. But everyone should have a limitation. So, we tried to raise the number of companies from 400-500 million tonnes to 600 million tonnes, when Mr Piyush Goyal’s tenure as Coal Minister, under the guidance of honourable Prime Minister and it stands at around 600 million tonnes till date and we want to make it a 1 billion company (1000 million tonnes) and for that we are making all arrangements. So, there is no question of difference with Coal India and I am assuring that Coal India will be strengthened and encouraged. It comes under our strategic sector and is a strategic PSU and has done good works and we will make all arrangements that are necessary to keep it performing.

Q: You are assuring that Coal India will be strengthened but some people are saying that why the company was not privatised rather than ending its monopoly and this may be a matter of concern. We have seen such an impact in previous cases like MTNL, its value eroded after its monopoly came to an end and the same case may happen in the case of Coal India. What is your view on it?

A: There is no question of divesting or privatization of Coal India. I can make it clear that it comes under the strategic sector and are currently producing 70%-80% of coal and the requirement may go up to 1,300 million tonnes to 1,400 million tonnes by 2023-24 and this is an estimate of our electricity regulation board. I have given a target to Coal India to produce 1 billion tonnes by 2023-24 and from where the remaining 300-400 billion tonnes will come from? Will we have to import it even after having coal in the country? Some people import coal from China. Is it fair? This is a time when the nation should think and that’s why the Prime Minister has said that we have to grow in this. We will encourage Coal India and at the same time, will not import what we don’t have but produce it within India, even to a foreign investor who is ready to come to India and invest here. The Prime Minister in his speech has said that India should stop importing coal and turn into a coal exporting country. And, I think we have enough coal and no one knows what will happen to it after 30 years.

An environment is being created across the world that coal should not be burnt, that’s why no one knows what will happen under such a situation. Thus, this is the time, when we should use our coal managing the environment and we will work under the guidelines provided by our Prime Minister.

Q: The government is also planning to create exchange-based real-time trading of coal. How will you make it happen i.e. on the existing exchanges or a dedicated trading exchange will be created?

A: It is a thought process but can’t share details related to it at present because a lot of brainstorming exercise hasn’t been done on it. But, when the production will increase – through commercial mining of the coal and achieving Coal India’s target of producing 1 billion tonnes – and turns sufficient then there is a need to think about it. But it is under my thought process and will go ahead with it after the Prime Minister talks about it and provides a guideline with respect to it. Having an eye on the amount of coal that we have, I think, that those who want coal should be provided with it at the market-driven prices and what’s wrong in having an exchange for that purpose. It is under consideration but will not be implemented in the recent future.

Coal India share price: Edelweiss give a BUY recommendation with price target of 186