The great election bazaar is here - what party are you wearing?

As India hurtles towards elections, balloons, buttons, banners and brightly hued saris and T-shirts are the order of campaigning days. 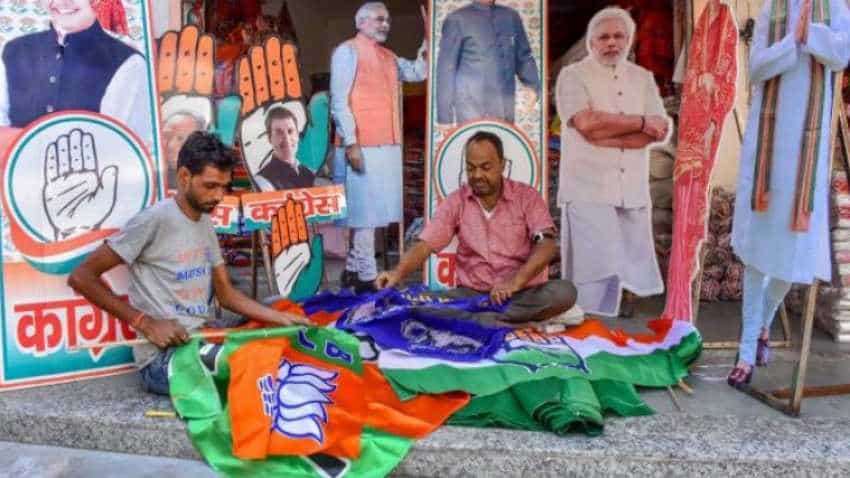 The 2019 general election is scheduled to be held in seven phases from April 11 to May 19. The counting of votes will be held on May 23. PTI
Written By: PTI
RELATED NEWS

You can wear your party loyalty on your sleeve, on your chest or even drape it around you. As India hurtles towards elections, balloons, buttons, banners and brightly hued saris and T-shirts are the order of campaigning days. Elections 2019 kick off on Thursday and parties across the political board are pulling out all the stops to brand their message on supporters and prospective voters. BJP's 'Main Bhi Chowkidar' T-shirts are flying off the shelves, the Aam Aadmi Party is doffing its hat to voters with customised caps and Narendra Modi and Priyanka Gandhi Vadra saris are selling fast too. The great Indian sale of election paraphernalia is taking place outside party offices, on online platforms like Amazon and Snapdeal and, of course, in Delhi's buzzing wholesale market Sadar Bazar.

With the varied goodies jostling for space online and on shop shelves the poll marketplace resembles the electoral battle place itself. "We are witnessing a lot of enthusiasm from supporters across political parties. From saris to T-shirts, power banks to USB drives, posters to coffee mugs, candidate and party-branded products are being purchased by supporters across India," a Snapdeal spokesperson told PTI.

"The most popular categories include car and bike stickers, T-shirts, caps, water bottles and key chains, with maximum demand from buyers in Andhra Pradesh, Tamil Nadu, Maharashtra and Gujarat," he added.

Election fervour is peaking in the crowded by-lanes of Sadar Bazar, where small and very small shops, are glutted with T-shirts, hand-held fans, flags, balloons, scarves, bands and other knickknacks with images of party symbols or their top leaders.

Flags of all major political parties, including mainstream BJP and Congress as well as regional ones like AAP and Samajwadi Party (SP), flutter in tandem. "'Main bhi chowkidar' ki hawa hai bas aur kuch nahi (The craze is only for 'Main bhi chowkidar' merchandise). T-shirts, caps and badges with this slogan are selling like hot cakes,? said Chaman Bhai, owner of Aaroma Enterprises, one of the many shops selling election publicity material in Sadar Bazaar.

"And it is not as if party workers or only candidates of BJP are buying it in bulk. Even normal supporters are coming and giving orders," he added, referring to the BJP's 'Main Bhi Chowkidar' slogan to counter Congress' 'Chowkidar Chor Hai' jibe.

Party flags cost around Rs 2.50 per piece, but can go up to Rs 55 for a 50 x 60 satin flag. A collared T-shirt with a party slogan sells for Rs 120, said Harpreet Singh from Vikram Enterprises. "I started manufacturing of election merchandise after Diwali. This time, the demand is more for things like mugs and T-shirts and less for flags and other conventional publicity material. "From what we are selling, I can say BJP is way ahead in the race, the Congress is a distant second and there are no takers for the AAP as of now. However, if seen overall, the business this time is way below expectation," said Harpreet.Singh.

This is his fourth Lok Sabha election selling poll merchandise.

Several miles away, Lokesh Kumar, who sells Congress takeaways outside the party's headquarters in Akbar Road, pushed for a Congress win. His stock of Priyanka Gandhi saris is sold out at the end of each working day, testimony to the fact that people are buying Congress merchandise in large numbers, Kumar argued. The sari, which shows an image of Priyanka Gandhi, Indira Gandhi and the Congress symbol against the backdrop of flowers, is priced at Rs 400. The sari phenomenon is not limited to the Congress alone.

Social media was recently flooded with images of Modi saris. Mostly manufactured in his home state Gujarat, these can be bought in Sadar Bazar and on online platforms like Amazon.

A quick search on Amazon shows saris ranging from Rs 700 to Rs 3,549, including one having 'How's the Josh' -- famous catchphrase from film "Uri: The Surgical Strike' -- written along Modi's image in army fatigues. Modi hoodies and T-shirts with slogans like 'Chowkidar Chor hai' and 'Namo Again 2019' cost between Rs 600-Rs 900. The BJP launched its range of NaMo (Narendra Modi) merchandise in September 2018. There's a NaMo app, a dedicated forum for sales, selling stationery, watches, coasters, T-shirts and masks. There are also five mini trucks, dubbed ?NaMo Raths', ready to hit the road.

"The response from the public has been very good so far. The proceeds of the sale will go to the Namami Gange project. As of now, the rath stationed at party's headquarter is the only one selling NaMo merchandise. We are in talks with the EC. If we get permission, the other four raths will travel across the country to sell party's merchandise," Manoj Goel, a member of the BJP's National Executive, told PTI.

Business is not the greatest this time.

Viewing the market from his perch outside the Congress headquarters, Lokesh Kumar said one reason for this is that both the Congress and the BJP are providing materials to their candidates directly after buying from selected suppliers. Sitting amid heaps of poll knickknacks waiting to be sold in his shop in Sadar Bazar, Harpreet Singh is not giving up hope. "If business does not pick up, I am definitely banking on the Haryana assembly elections -- to be held in October -- for my stock to be cleared," he said.

The 2019 general election is scheduled to be held in seven phases from April 11 to May 19. The counting of votes will be held on May 23.