Mumbai-based Lodha Group, which is in the process of raising Rs 5,000 crore from the primary market, faces several complaints over its iconic tower ‘World One’, which is being marketed as world’s tallest residential building. 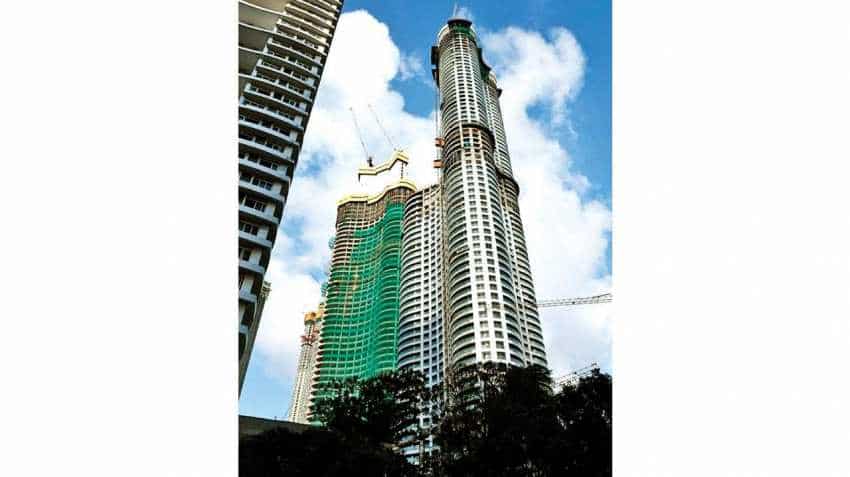 Mumbai-based Lodha Group, which is in the process of raising Rs 5,000 crore from the primary market, faces several complaints over its iconic tower ‘World One.’ Image source: DNA
Written By: Dipu Rai

Mumbai-based Lodha Group, which is in the process of raising Rs 5,000 crore from the primary market, faces several complaints over its iconic tower ‘World One’, which is being marketed as world’s tallest residential building.

Over the last eight years, the developer has been advertising and selling 117 stories of `World One’ without approval from Airports Authority of India (AAI), a Ministry of Civil Aviation body, which is responsible for height limit near airports.

The height issue has pushed the Lodha project in limbo, and a group of earnest buyers, mostly corporates, have filed cases with Maharashtra Real Estate Regulatory Authority (MahaRERA). A copy of a complaint, seen by DNA Money, alleged that Lodha made “willful attempts to defraud” over unapproved height.

As of now, the project is allowed only 285.09 metres (about 76 stories) but from 2010, Lodha has marketed it as 117 storied structure (423-metre Above Mean Sea Level, or AMSL), which makes it world’s tallest residential building. The group, which collected Rs 1,830 crore from potential buyers as on December 31, 2017, had claimed that the project would be completed by 2018. The group is still waiting for the final approval for the requisite height.

Buyers were also asked to pay for the unapproved height and get handsome returns, DNA Money investigation showed.

In an e-mail response, Lodha, however, told DNA Money that the Delhi High Court had passed a ruling in their favour in 2017, asking the AAI to commission a study by the International Civil Aviation Organisation to grant them the additional height. “Once this process is complete, floors above the current levels will be built, subject to the consent of residents. All relevant disclosures in this regard have been made in the draft red-herring prospectus filed (with the stock market regulator). An iconic development like World One is inspired by global landmarks and continues to bring the best from the world for our customers,” said Lodha.

Documents, accessed by DNA Money, show that the height of this project was not only showcased but also used to get advance money from buyers. The group devised an advance payment scheme “MyGain”, which was linked to the unapproved height level of the tallest tower. Internal communication with buyers revealed that the Lodha and their sales executives lured customers to pay advance money to avail the benefit of “MyGain”. In August 2013, Lodha executives sent an email to buyers, offering more than double return in comparison to fixed deposit and liquid fund. Under the scheme, a buyer had to pay more advance money which was linked to different slab levels including “initiation of RCC for slab 90” and “initiation of RCC for slab 100” and get more returns than FDs.

This offer was beyond the permissible height limit of the project. An attached sheet with the email illustrated how buyers would get a benefit over pre-payment of ongoing instalment. They claimed buyers would get a return of 17.36% (pre-tax) under the Lodha MyGain scheme, which would more than double of prevailing SBI-FD (7.50%) and Taurus liquid fund (8.75%).

“It becomes amply clear that Lodha group made willful attempts to defraud,” a buyer alleged in his complaint to MahaRERA. “Lodha is raising demands when they very well know that requisite statutory permissions for the corresponding milestone payment were not in place,” he said.

Venket Rao, legal expert, Intygrat, said, “The problem stems from the fact that substantial monies could have been collected by the developer without proper approvals in place. Under RERA, a developer is expected to have all the approvals in place before he proceeds for RERA registration and subsequent sale of the units in a project”.

Around June 2010, Shreenivas Cotton Mills Ltd (SCML), a subsidiary of Lodha Group, launched a residential project ‘World One’, in Mumbai’s new business district of Lower Parel. Initially, the group launched two residential towers in the project. One of them ‘World One’ was publicised as ‘world tallest residential tower’ to be built on 18 acre prime land comprising of 117 storeys equivalent to the height of 423 metres. ‘World One’ has been conceptualised as a luxury project loaded with 80,000 sq ft sports arena, 1,000,00 sq ft spa and club and India’s highest public observatory at 1,200 feet. At that time, Lodha assured to customers that project would be completed and delivered in 2015.

The AAI had not given nod to construct beyond 284.29 meters (approximately 76 floors), but they stretched it to the 80th floor in 2015. The group requested AAI to revise the height to 453.29 metre on January 23, 2015. But AAI declined the request. According to the Ministry of Civil Aviation documents, “Applicant (SCML) subsequently, vide letter dated 23.01.2015 had requested again to grant permissible height as per ICAI standards for the iconic tower,” and documents further point out that “the building has already reached height of 80 floors”.

In 2010, AAI had rejected for the grant of height 501.33 metre AMSL and granted a maximum height of 284.29M. In 2015, Lodha had sought review of the issue before the Appellate Committee of the aviation ministry on the revised height of 454.29M. Minutes of the meeting of the Appellate Committee on November 6, 2015, show that the committee had rejected Lodha’s request and granted final height clearance for the only 285.06M.

The committee had granted a minor relaxation in height after considering the aeronautical study report with a warning that “no fresh request to conduct another aeronautical study by International Civil Aviation Organisation (ICAO) will be considered”.