Sikkim Chief Minister Pawan Chamling on Monday called for global cooperation to make agriculture totally organic the world over by 2050, citing the achievement of his Himalayan state in north-east India. 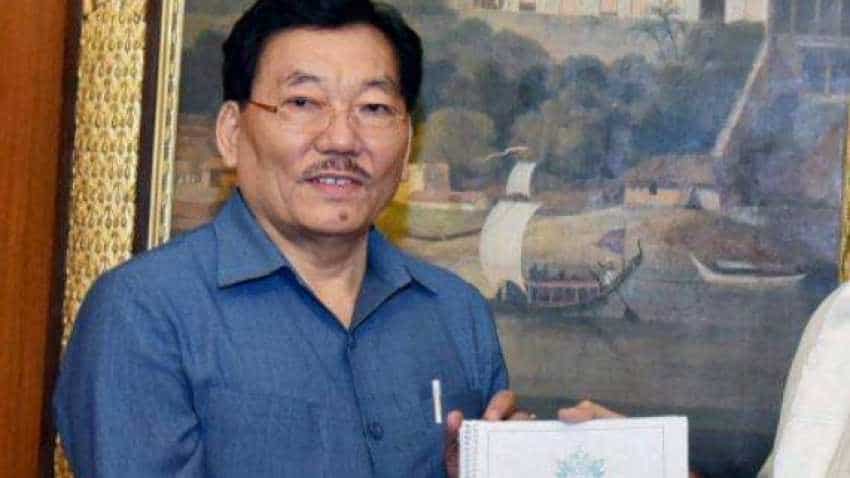 In January 2016, he said, Indian Prime Minister Narendra Modi came to Sikkim and declared Sikkim as a fully organic state in India and in the world. Image source: PTI

Rome: Sikkim Chief Minister Pawan Chamling on Monday called for global cooperation to make agriculture totally organic the world over by 2050, citing the achievement of his Himalayan state in north-east India. Addressing a news conference at the Chamber of Deputies in the Italian Parliament, Chamling

said to heed the warnings of climate scientists about impending dangers, the world must adopt farming without chemical fertilisers and pesticides as that would help reduce carbon emissions by 50 per cent. "If we can do it in Sikkim, there is no reason it cannot be done elsewhere," he said.

Chamling received the UN Food and Agriculture Organisation`s (FAO) Future Policy Gold Award for Sikkim`s achievement in becoming the world`s first totally organic agriculture state.  The member of Parliament from Chamling`s Sikkim Democratic Front, Prem Das Rai, was among those who attended the

congratulated Chamling and Sikkim for their pioneering work and showing how organic farming was possible. Maria Chiara Gadda, the Democratic Party leader at the Agriculture Commission, said that Sikkim is an inspiration for striving towards sustainable organic farming.

Chamling said that organic farming is a form of action of non-violence. He said when his government embarked on the organic farming mission in 2003, it was confronted by opposition parties and vested interests of the chemical sector. But through hard work backed by a strong political commitment, Sikkim

was able to overcome the odds and become totally organic by 2015. "Based on my long experience and association with the organic initiative, I can tell you in all good faith and confidence that a 100 per cent organic world is possible. If we could do it in Sikkim, there is no reason why policy makers, farmers

and community leaders cannot do the same elsewhere in the world." "If we are to heed the warnings of the climate scientists then we have to stop the use of chemical fertilisers globally by over 50 per cent immediately. This will reduce the carbon dioxide emission by half," Chamling said.

Now, several Indian states like Kerala and those in the North East were trying to follow the example of Sikkim. It is important to involve the youth in the organic mission and many educated young farmers in the state have developed marketing strategies that take the state`s produce to places as far away as

Delhi and Bengaluru, he said. "Sikkim is the most peaceful state in India... it is the best in many ways," Chamling said, highlighting its gender equality and the absence of extreme poverty or religious and caste tensions. Saying he is not a scientist or a researcher but simply a politician, he said: "It (organic

farming) has taken us over a decade to do this. But due to our perseverance, political will...I must say a strong political will, sincerity and hard work, we have been able to achieve this." According to him, the forest cover of the state has increased from 43.95 per cent in 1993 to 47.80 per cent in 2015, an

increase of over four per cent. In January 2016, he said, Indian Prime Minister Narendra Modi came to Sikkim and declared Sikkim as a fully organic state in India and in the world. Vandana Shiva, environment activist and President of Navdanya International, said that "organic zones" are the "zones of

"Sikkim shows the world it is possible to be 100 per cent free of the chemicals that destroy and defeat the forces that promote them," she said. Sikkim beat out 51 other nominees from 25 countries for the Future Policy Award 2018 -- the world`s best laws and policies promoting agro-ecology.

This year`s award was co-organised by the Food and Agriculture Organization (FAO), the World Future Council (WFC) and IFOAM - Organics International. Brazil, Denmark and Quito shared the silver award.