To ease traffic congestion for commuters between Noida and Akshardham, Delhi Chief Minister Arvind Kejriwal on Friday inaugurated a three-lane flyover at Mayur Vihar in Delhi. 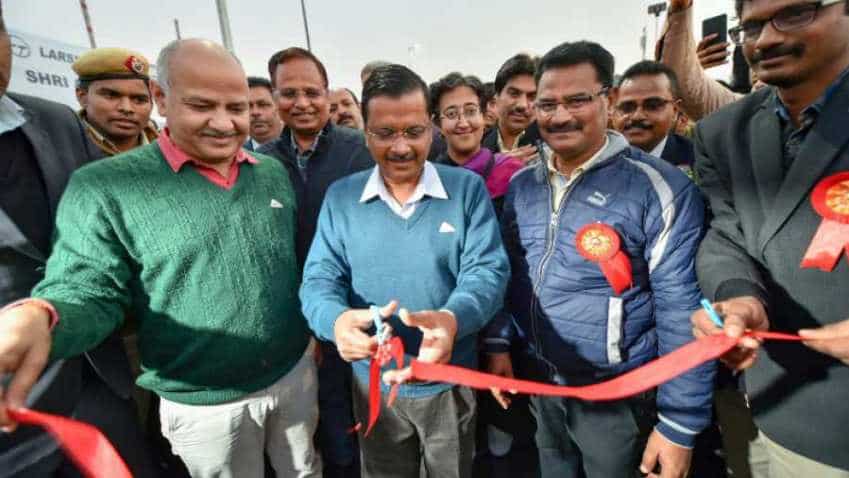 To ease traffic congestion for commuters between Noida and Akshardham, Delhi Chief Minister Arvind Kejriwal on Friday inaugurated a three-lane flyover at Mayur Vihar in East Delhi. The one-kilometer-long flyover, a part of Barapullah elevated road corridor under phase III extension from Mayur Vihar to Sarai Kale Khan, was built at a cost of Rs 45 crore and was inaugurated in the presence of Delhi Deputy Chief Minister Manish Sisodia and PWD Minister Satyendar Jain.

The flyover was inaugurated after missing at least four deadlines. With a smooth and uninterrupted movement of traffic on this intersection, the Delhi government claimed to save emission of at least 1.29 tons of carbon dioxide per day.

"The traffic congestion for hours led to a huge mess and nuisance, especially during the peak office hours. It will end after the flyover opens," the government claimed. It will also help in reducing the air and noise pollution in the area, it added.
Kejriwal, while addressing the people after inauguration, said the flyover will help the people living in the area.

Speaking about the works done by his government in the last four years, Kejriwal also said that he is fighting to ensure that all the alleged deleted voters should be re-enrolled in the voters list. "I have the list of deleted 30,00,000 voters. I am ensuring that all are enrolled.
"But don`t go and vote for Modi when I am fight to re-enroll your names," he said.

He also said that by voting for the Congress, people will help BJP in winning the 2019 Lok Sabha election. "Delhi should vote the AAP, Congress will be only there to cut into our votes.

"In last Lok Sabha, the BJP got 46 per cent votes, AAP 33 per cent, while the Congress only got 15 per cent. If you vote for Congress, the BJP will win.Those who want to remove Modi, should vote for AAP," he said.

This BJP MP says 'no mehngai' India, then corners opposition on ‘revadi’ culture