Shubh mangal zyada saavdhan Review: This was commercial Bollywood`s first ever homosexual rom-com, catering the story of a couple of loverboys. 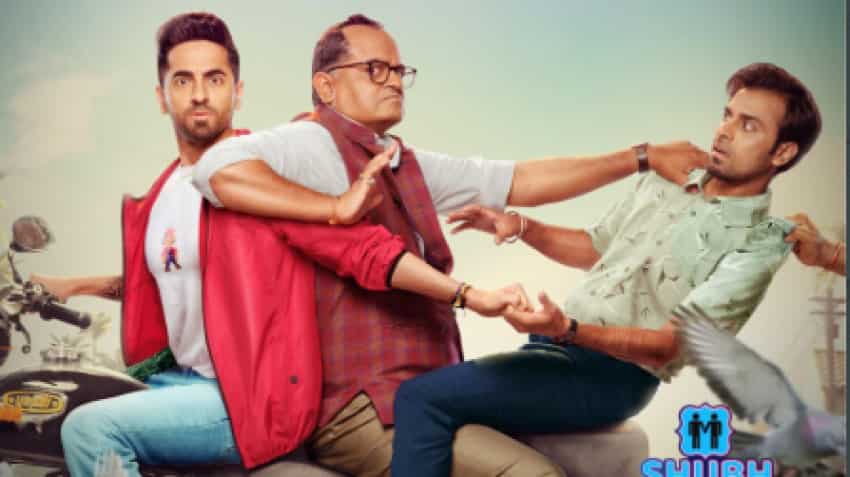 The love story has traditionally been the most commonplace money machine among all genres in Bollywood. Photo: Ayushmann Khurrana twitter handle
Written By: IANS
RELATED NEWS

Shubh Mangal Zyada Saavdhan Review: At one level you are watching the same old Bollywood rom-com, about two lovebirds trying to unite against all odds, against parental censure and societal diktats. It`s all done with feel-good verve too, with the mandatory naach-gaana and `shaadi ka tamasha` thrown in.

Only, "Shubh Mangal Zyada Saavdhan" always looked different despite the cliches. The film grabbed eyeballs from the day it was announced because the lovebirds in the frame weren`t a guy and a girl. This was commercial Bollywood`s first ever homosexual rom-com, catering the story of a couple of loverboys.

Which denotes a big leap for mainstream Hindi cinema. The love story has traditionally been the most commonplace money machine among all genres in Bollywood. To retain every stereotype of the genre and turn the lucrative package into a quiet little snub at homophobes, amid standard hilarity and melodrama, is actually quite an experiment to pull off, and debutant writer-director Hitesh Kewalya deserves kudos if only for that much.

"Shubh Mangal Zyada Saavdhan" sets out to narrate that idea through a screenplay set against a smalltown, middle-class backdrop. This is the world of Aman Tripathi (Jitendra Kumar), who completes a happy family album with his mother, father and siblings. Aman is swept off his feet by Kartik Singh (Ayushmann Khurrana) and thus begins an affair that will leave his conservative family lost for words and reaction.

The struggle of the gay couple, as they try to convince their kin into acceptance, is played out with humour, but Kewalya`s script credibly avoids getting flippant about it. Rather, as Aman`s family go on a desperate matchmaking spree to hook him up with a girl, you realise the joke`s on homophobia.

Being Kartik Singh has to be Ayushmann Khurrana`s toughest challenge among the comedy films he has delivered lately, if only because playing the gay lover would seem at loggerheads with the essential idea that mainstream Bollywood harbours about heroism even in 2020. "Shubh Mangal Saavdhan" only marks the latest chapter in actor`s continuing adventure with disrupting everything that defines the Bollywood hero, and he is clearly relishing every bit of it. But this isn`t Ayushmann`s best performance ever -- the film and its protagonist lack the nuances of "Andhadhun" or "Article 15".

For TVF sensation Jitendra Kumar, playing out Aman would seem like a perfect launch into the big screen space. Jitendra fans know him as a maverick of sorts in the web world where he so effortlessly impresses. He carries that understated screen presence into his act as Aman, a perfect Yin to Kartik`s Yang.

The odd couple chemistry the two actors share owes itself to an authorbacked plot, but "Shubh Mangal Zyada Saavdhan" wouldn`t be the same without Neena Gupta and Gajraj Rao either. The elderly "Badhai Ho" couple returns as Aman`s parents. Primarily, their role is to convey shock in a world where it is still not considered `normal` to accept one`s son as a gay person. Rao and Gupta have lost none of the comic timing edge that made "Badhai Ho" special. Delivering excellent acts individually, they also remain an asset for the film as a duo.

Rao and Gupta benefit from the fact that this film, like most of Aanand L. Rai`s productions, sets up every character including the prop cast with a balance of the real and the entertaining. Proven talents as Manurishi Chaddha and Maanvi Gagroo, who play out vital cogs, also impress in interesting roles.

The film`s biggest assets are its actors, along with the fact that it is among Bollywood`s quirkiest shots at comedy ever. Putting the spotlight on homosexuality in a commercial set-up would also seem like a commendable effort at starting a wider conversation on the subject.

However, you get a finale that is not altogether unpredictable. Looking at the formulaic Bollywood love story through the prism of gay romance, the film also staunchly refuses to skim beneath the surface while addressing a subject as gay relationship, which has acquired topicality in our times.

That way, one could look at it as an opportunity lost, given the reach the film and its lead actor are bound to enjoy.