Indian shares fell on Thursday, dragged lower by heavyweights such as Reliance Industries as well as financial and technology stocks, signalling low risk appetite among investors ahead of some key company results.

Back home, caution prevailed ahead of quarterly results of software exporter Tata Consultancy Services , which fell 2.1 %. TCS is expected to report results on Thursday after the market closes, ahead of Infosys` results, which is due on Friday. 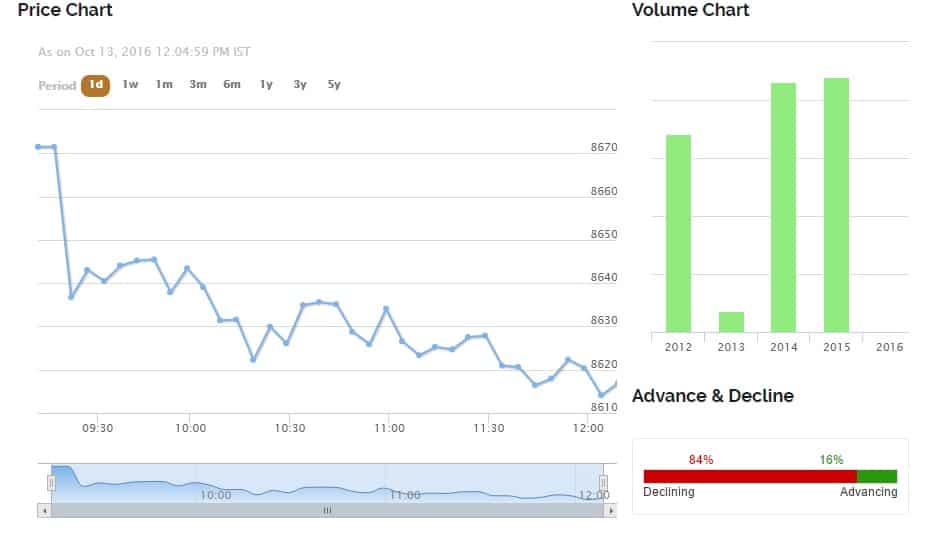 "China has been a concern for a very long time and today`s data indicates that exports are not up to the mark. So markets are seeing a correction. But going ahead, focus remains on quarterly results," said AK Prabhakar, head of research at IDBI Capital.

Indian financial markets were shut on Tuesday and Wednesday for public holidays.

Index heavyweights such as Reliance Industries was down 1.5 % while Housing Development Finance Corp declined 2.5 %.

Mining stocks such as Hindalco Industries and Vedanta Ltd also fell more than 1.5 %.

The Nifty Metal index was down nearly 1 %, reflecting weakness in global metal prices after exports at the world`s biggest metals consumer China fell more than expected in September.

Among the gainers, IndusInd Bank rose as much as 2 % after the lender on Wednesday posted a near-26 % rise in September-quarter profit.

Cipla rose 1.3 % after the drugmaker said on Wednesday that the U.S. Food and Drug Administration cleared its manufacturing facility at Indore.

(Reporting by Aastha Agnihotri in Bengaluru; Editing by Amrutha Gayathri)