This news comes as the Supreme Court will hear a petition on the diesel ban on Thusday at 2pm. 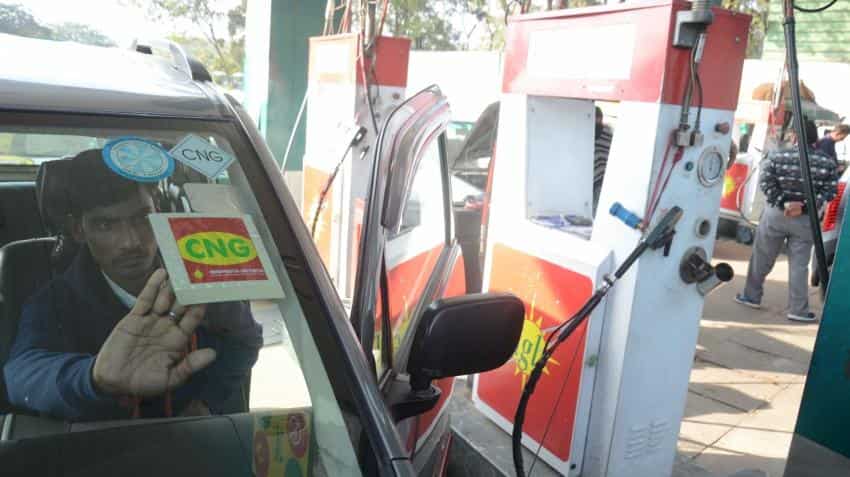 A man applies CNG sticker on a car at a refill station in New Delhi. Photo: IANS
Written By: Collin Furtado
RELATED NEWS

Diesel cab ban: Supreme Court to hear the matter on May 5

The decision by the Supreme Court to ban diesel taxis in Delhi is bad news for the many taxi-owners but the City Gas Distribution Entities (CGDEs) in the capital aren't complaining. The order will lead to a higher volume growth for CGDEs, according to India Ratings and Research (Ind-Ra).

Supreme Court is scheduled to hear the petition of Delhi Government on the diesel ban on Thusday at 2pm where the Government is likely to submit a plan to phase out diesel-run taxis.

Taxis and private cars have been turning to CNG for quite some time but the SC order has led to a definite increase. The Ind-Ra report said that the monthly car conversion/addition rare has increased to 4,400 per month over nine months in FY16 from 3,500 per month in FY15 in Delhi. It expects this rate to increase further to around 5,000-5,500 per month in FY17.

This is subject to the plan which will be submitted by Delhi government for the phase out or conversion of taxis run on diesel and petrol.

Some of the key measures taken that have resulted in CGDEs volume growth has been listed by Ind-Ra include:

The reason for this is the Odd-even rule which exempts only CNG vehicles from adhering to it. Ind-Ra also said there has also been a shift in preference for CNG vehicles in Delhi NCR.

“Further, the expectation that the odd-even rule would continue, has led to new buyers in Delhi NCR preferring CNG vehicles over petrol and diesel. The other factor contributing to the volume upswing is the increase in the public transport, wherein additionally around 1850 buses have been added during 9MFY16 in Delhi compared to around 580 buses added over FY13-FY15,” said the research agency.

Ind-Ra expects a 9-10% growth in volume increase in CNG sales from buses in Delhi in FY17.

While this industry benefits from the diesel taxi ban, there are other industries that are expected to suffer. For instance, the IT trade body Nasscom on Wednesday said the ban on diesel taxis in Delhi-NCR has brought the Business Process Management (BPM) or outsourcing industry to a  standstill and urged the government for an interim relief.

"With 38% women employees in our industry, their safety has always been a big concern to us. We are mandated to provide transportation for  home  drop to employees working after 8 pm. Taxis play a major role in ensuring this. In the absence of any reliable public transport, complying with this statutory guideline is impossible," said Nasscom vice chairman Raman Roy.

According to Nasscom, the BPM industry employs nearly one million people directly and indirectly in Delhi-NCR, majority of them working in night shifts on important projects for global clients.

Another reason for the CNG volumes are increasing is that despite the declining crude prices the government has kept the price of diesel and petrol high by increasing taxes. This has benefitted CNG by giving it the competitive advantage, said Ind-Ra.

Diesel cab ban: Supreme Court to hear the matter on May 5