The 2018 Forbes India Celebrity 100 List rankings are based on estimates of entertainment-related earnings of celebrities. 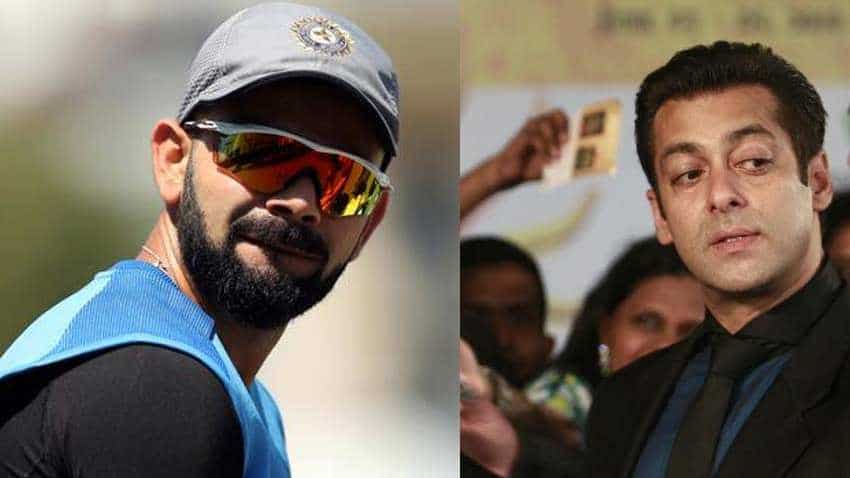 Indeed, there is no beating Bollywood superstar, the 'Dabangg' Salman Khan! The famed actor has even left Indian Cricket Team Captain Virat Kohli behind to top the 2018 Forbes India Celebrity 100 List! Yes, Salman is the richest celebrity in India! Salman has emerged as the richest Indian celebrity, according to the Forbes 2018 list, retaining the position for the third consecutive year. Unfortunately, for Shah Rukh Khan, the 'Baadshah' of Bollywood has fallen out of the top 10 list!

The 2018 Forbes India Celebrity 100 List rankings are based on estimates of entertainment-related earnings of celebrities. The period under consideration is October 1, 2017 to September 30, 2018.

Salman Khan's earnings are pegged at Rs 253.25 crore. Salman, 52, cemented his place in the top spot thanks to the commercial success of his movies "Tiger Zinda Hai" and "Race 3". His earnings were backed by endorsements of several consumer-facing brands, and constitute 8.06 percent of the total earnings -- Rs 3,140.25 crore -- of the top 100 celebrities for the year, read a statement from Forbes.

However, it is far from gloom and doom for Indian cricket captain Virat Kohli as he has jumped one spot to the second rank, with total earnings of Rs 228.09 crore, a sharp increase of 116.53 percent from the previous year. Actor Akshay Kumar completed the top three, with Rs 185 crore in earnings in the period under consideration on the list.

With no movie releases in 2017, Shah Rukh Khan, who was at the second spot on the 2017 Forbes India Celebrity list, fell out of the top 10. His earnings were down 33 percent this year, at Rs 56 crore from endorsements, placing him at rank 13 on the list.

Newly-wed actress Deepika Padukone broke into the top five on the Forbes India Celebrity 100 list -- the first woman celebrity to find place in the top five -- with earnings of Rs 112.8 crore, placing her firmly at rank 4, thanks to the commercial success of "Padmaavat", and her brand endorsements.

There is mixed representation from the prolific South Indian film industry. There are 17 celebrities from the South this year against 13 on the 2017 list. The number of Bollywood actors is down from 33 to 31, despite their cumulative earnings increasing by 12.89 percent from the previous year.

Brian Carvalho, Editor, Forbes India, said: "The Celebrity 100 is a definitive barometer of earnings of celebrities. Besides the earnings charts and cover stories on high-fliers like Sachin Tendulkar, Akshay Kumar and Deepika Padukone, we have also covered in the Celebrity 100 Special issue a whole new generation of celebrities -- the unlikeliest of YouTube stars from the hinterland, a rapper from the Mumbai ghettos and an activist actor from Kerala taking on misogyny head-on in the testosterone driven Malayalam film industry."

Indian cricket team all-rounder Hardik Pandya, with earnings to the tune of Rs 28.46 crore, was the highest gainer (in percentage terms), with his annual earnings rising nearly nine times.

Actress Nayanthara, whose earnings stand at Rs 15.17 crore, is the only woman from the South Indian film industry to make it to the list, following the success of her dark comedy, "Kolamavu Kokila" and the thriller "Aramm".