Salman Khan Blackbuck case: The superstar has been taken to Jodhpur Jail and a hearing on bail plea will happen on Friday. Check out here the impact on companies he is linked with. 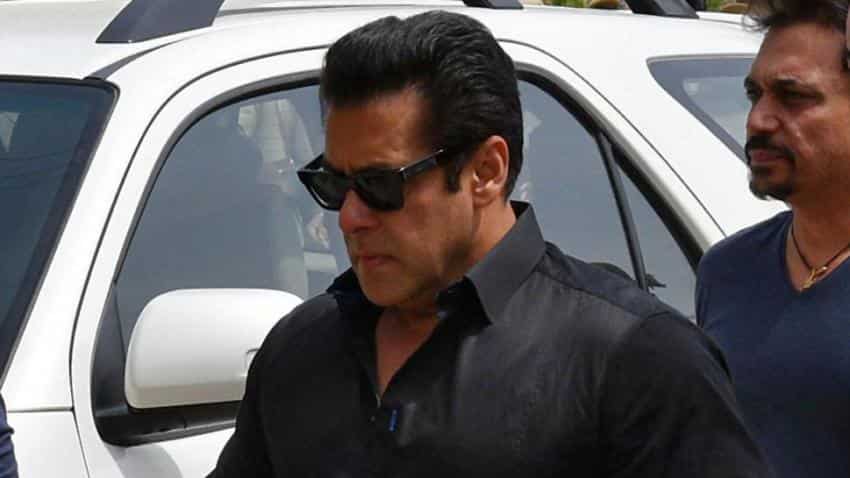 Actor Salman Khan arrives to appear before a Jodhpur rural court in connection with the hearing in black buck poaching case, on April 5, 2018. Photo:Reuters
Written By: Pooja Jaiswar
RELATED NEWS

Salman Khan Blackbuck case: A lot has happened today that will impact Bollywood hard. 'Megastar' Salman Khan's case was once again tabled in a courtroom over a crime which was committed 20 years ago involving the hunting down of two blackbucks in Kankani village of Rajasthan in 1998 . After a brief interlude in court, to the consternation of his fans, the Dabangg star was sentenced to a five year jail stint and a Rs 10,000 penalty . The verdict was delivered by the Jodhpur court. The 52-year old superstar has been taken to Jodhpur Central Jail from court, while a hearing on bail plea will happen on Friday.  The verdict came in the afternoon, and since then, havoc has been created by fans on Twitter. However, the listed companies, which the actor endorses, really faced the heat from investors in the wake of the verdict.

In September 1998, during the shoot of film ‘Hum Saath Saath Hain’, Salman Khan along with his co-star Saif Ali Khan, Tabu and Sonali Bendre were accused of killing blackbucks in Kankani village of Rajasthan. A complaint was registered against Salman and his co-stars  by the Bishnoi villagers on October 2 of the same year. Salman was arrested for the case in  the same month. However, he received bail.

Interestingly, Blackbuck was not the only case, registered against Salman. In 1998, another case, namely chinkara poaching case, which also took place in the same year, was brought to trial.

The case was revived in 2006 and Salman was fined Rs 25,000 and also a 5 years sentence was imposed under Wildlife Protection Act. However, the High Court dropped the charges against him under the Arms act in 2007. Later in 2014, the Supreme court issued a notice to Salman after a plea was made by Rajasthan government challenging the order, which was suspended in 2007.

Since then, Salman has been making the rounds of trial courts in the two cases. On Thursday, Salman faced charges under Section 51 of the Wildlife (Protection) Act. While his co-stars mentioned above were acquitted under Section 51 read with Section 149 (unlawful assembly) of the Indian Penal Code, Salman himself was pronounced guilty. A  fifth person named Dushyant Singh -  a local businessman from the area - was also acquitted.

Salman Has been associated with the company since 2012. The company which holds a revenue of Rs 1,408 crore as on December 2017, witnessed selling pressure in their stock price, when the actor’s verdict was announced.

The stock was trading higher in the early trade and pared all its gains to turn flat after the court verdict on black buck case was announced. The stock hit an intra-day low of Rs 111.25 per piece on BSE, down by a massive 4.18%. It is down over 24% so far this year, and traded just 7% higher from its 52-week low of Rs 104.

The company appointed Salman as it’s brand ambassador in 2017. Currently, the company is in three major savoury snack food categories in India namely Extruded snacks, Chips and Namkeen and all its products are sold under the Yellow Diamond brand.

After the verdict, the share price of the company tumbled by nearly 1.29%, before finishing at Rs 1,327.95 per piece on BSE compared to the previous day prices.

Just like Relaxo and Mandhana, the actor has been associated with the company since 2012. The company which is among the leading plumbing and drainage system maker in India, roped Salman in as their brand ambassador during the filming of Dabangg 2 for tapping the company’s product popularity. It was revealed that Salman actually used Astral Pipes in the movie.

Interestingly, Astral did not face much heat compared to the above mentioned companies, as it saw only gradual decline, but managed to end at Rs 910.35 per piece on BSE up by 0.59%.

Emami brought in Salman to join Bollywood’s ‘Big B’ - Amitabh Bachchan, as both of them have a strong PAN-India appeal.

Compared to above mentioned companies, the Salman verdict, failed to impact massively as the company’s stock price closed at Rs 1,109.60 per piece up by 1.67% on BSE.

Many people went on to Twitter with some supporting the court’s verdict others not. Here’s are a few tweets on Salman’s verdict.

So after 19 years, the #JodhpurCourt will finally announce its verdict in #SalmanKhan ’s #BlackbuckPoaching case tomorrow !

And I know our Law System... So
Congrats to All Bhai Fans in advance ! He will be acquitted for sure ! #SalmanVerdict

Suddenly all Salman fans are going back in history just to prove "some offenders were not punished" so why Salman?

This is the reason!! Everyone tries to PROTECT THEIR IDOLS...!
Why can't ppl just hail the conviction of guilty person? #BlackBuckPoachingCase #SalmanVerdict

5 years jail for Salman Khan in black buck poaching case; 5 years earlier in hit and run case in which one person killed, 5 injured; not sure how the law works here.. shouldn't quantum of punishment fit the nature of crime? #SalmanVerdict

Glad the court has stood up finally ! This man- boy who is alleged to have beaten his girlfriends up, alleged to have been in a car that was driven over homeless ppl, will finally be behind bars! But how long?#Salmankhan #BlackBuckPoachingCase #SalmanVerdict #salmanconvicted