Padmaja Chunduru, MD &CEO, Indian Bank, talks about its amalgamation with the Allahabad Bank and problems that the bank faced in the process among others during an interview with Swati Khandelwal, Zee Business. 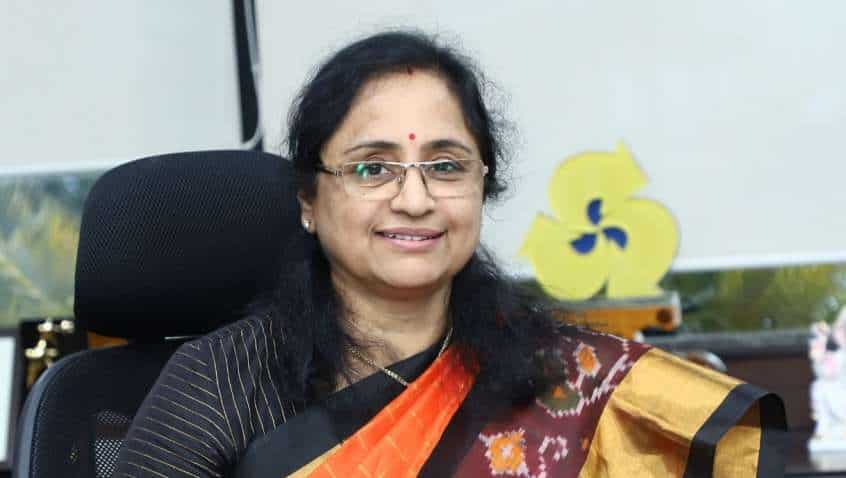 Padmaja Chunduru, MD &CEO, Indian Bank, talks about its amalgamation with the Allahabad Bank and problems that the bank faced in the process
Written By: Jitesh Kumar Jha
RELATED NEWS

Coronavirus: 5 special emergency loans announced by this bank - Check who all can avail them

Padmaja Chunduru, MD &CEO, Indian Bank, talks about its amalgamation with the Allahabad Bank and problems that the bank faced in the process among others during an interview with Swati Khandelwal, Zee Business.

Q: The amalgamation of Indian Bank and Allahabad Bank has been completed. So let us know about those things that the customers should remember, now?

A: Merger was announced six months ago and since then we were working for its completion. The branches of both banks are ready for the customers and the products have been recognised and the interest rates are the same at both branches. Customers must not be worried as their account number, IFSC code and cheque book and passbooks will remain the same and they will not face any problem in bank services. We have also started different loans to benefit the customers amid the COVID-19 emergency and it can be availed by from the branches of both the banks, Indian Bank and Allahabad Bank. The facility is available for corporates, MSMEs, salaried, pensioners, as well as the farmers, i.e. we have tried to cover almost every sector. At the same time, I would like to use the platform of Zee Business to appeal that the customers can connect with your branch of the banks for such loans and use the loan facility that is available for you at this point of time. As we know that our customers may be he is big, small, intermediate and businesses are facing issues related to the liquidity and that is why the scheme has been launched. This facility can be availed from the branches as well as the banking corresponding networks. Also, the mobile ATM networks have enabled us to reach almost every place in India, thanks to this merger – as Indian Bank was available in South and West and Allahabad Bank was present in North and West. With this merger, we have our presence across India and doing business together.

Q: It is a difficult time for people and the banks have to play an important role at this moment. And we have seen that the merger of the two banks was completed at the same time. So, let us know about the things that hindered the process as well as the major challenges that the bank is facing at present?

A: The first challenge is the safety of our employees and we are trying our best to protect our employees and keep working because banking comes under the essential services category. When it comes to a merger than I have said that the process was on for last 5-6 months and we have faced only one problem and that was that people were not able to travel in the last month. Even I was supposed to visit Kolkata on April 1, 2020, which was not possible but the training and the meeting with the employees and customers which were scheduled to be held didn’t happen. But, the same was done earlier as well in Kolkata, Varanasi and Ahmedabad and I was present in these cities. The problem that we faced in the last minute was related to physical movement but it was done through the help of technology.

Q: Can you inform us about the kind of growth the bank has seen in terms of employees and branches post-merger? Also, are seeing stress in any particular sector or account, at present, which will need provisioning?

A: The first thing is that the bank has doubled in itself and we have generated hashtag our banking services #TwiceAsGood. Indian Bank branches have increased from 3000 branches to 6000 branches and the number of employees has gone up from 20,000 to 43,000. Thus, everything has doubled including the business. You were asking about the sector that is under stress but I would just like to ask name the sector that is stress-free because we are going through a major crisis, which means every sector is going through stress and we are prepared for it because the Reserve Bank of India (RBI) has introduced several schemes for the purpose and government has taken several steps to contain it. But, it doesn’t mean that the things have improved and the situation is evolving and RBI is coming up with steps to face it and every bank including ours are coming forward. We will face stress in the June quarter but the moratorium will reduce its impact a bit. Now, we will have to wait and watch how soon the economy will return on track may be in six months or a year, as it will depend on how things will evolve.

Q: Does the bank have enough capital to support growth and what kind of support you are expecting from the government which can act as a breather for the banking sector?

A: Figures of March 31, 2020, are being released. However, our capital adequacy condition is strong for growth. At the same time, putting more pressure on the government is not good but if the stress deepens in itself and the NPA position is evolving. As of now, the bank is strong and we will have to see about the things in the future and it will not be limited just to the Indian Bank but for the complete industry and I have faith that RBI will come out with certain measures for it.

Coronavirus: 5 special emergency loans announced by this bank - Check who all can avail them