The vessel is a double-ended ferry that will sail at an average speed of 15-17 knots with a transit time of one hour between the two shores. Boarding and unboarding the vehicles, passengers off the vessel will take another hour. 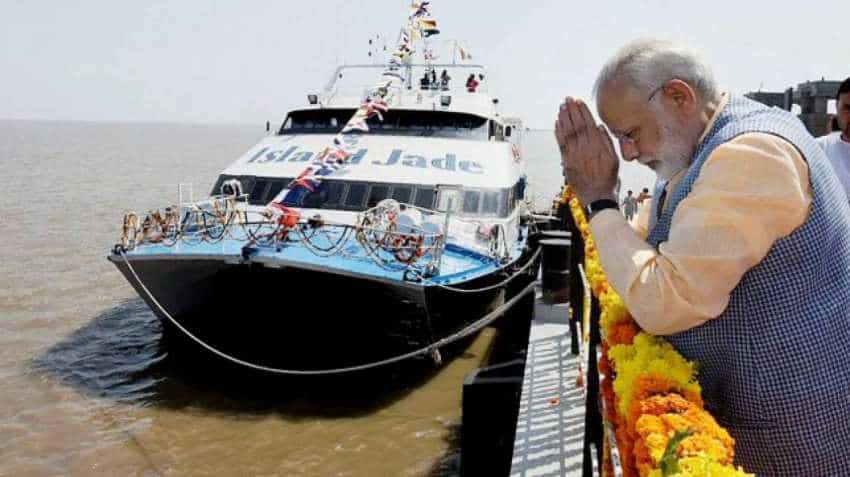 Exactly an year ago, Modi had inaugurated the first phase of the service which ferried only passengers on the route. Image source: PTI
Written By: IANS
RELATED NEWS

The distance between Ghogha near Bhavnagar in Saurashtra in the west and Dahej in south Gujarat via road is about 360 km and it takes around 10 to 12 hours to travel.

The project was conceptualized much before Narendra Modi came to power but he got it rolling in around 2006-07. After more than a decade, the project is now ready.

Exactly an year ago, Modi had inaugurated the first phase of the service which ferried only passengers on the route.

The Gujarat Maritime Board (GMB) has formed an SPV (special purpose vehicle) for the services and roped in Indigo Seaways Pvt Ltd on a public private partnerships (PPP) mode to function.

"The vessel `Voyage Symphony` has arrived and set to sail from Ghogha terminal on its first journey between Saurashtra and south Gujarat as the Chief Minister will inaugurate it. We have carried out the trial runs during last two days and they were satisfactory," said Chetan Contractor, Chairman and Managing Director of Detox Group, which operates the services.

The group has invested around Rs 140 crore for the project, bought a South Korean vessel `Voyage Symphony` made in 2015.

The vessel is a double-ended ferry that will sail at an average speed of 15-17 knots with a transit time of one hour between the two shores. Boarding and unboarding the vehicles, passengers off the vessel will take another hour.

"Initially we will be plying two vessels, one for only passengers, with a maximum speed of 25 knots, and the other for transportation of vehicles and passengers. The `Voyage Symphony` has a capacity load of 60 trucks, 5-7 buses, 3-40 cars, 40 bikes and a cumulative capacity to ferry 525 passengers," said Devendra Manral, the Chief Executive Officer of the Detox group.

The tariffs for the services will be shared by GMB and Indigo Seaways, but the exact share was not disclosed by either side. For multi wheeled empty cargo (one driver and one cleaaner), the charges for trucks and buses will be Rs 4,500, Rs 800 for cars and Rs 150 for two wheelers.

Additional charges for trucks will be Rs 125 per tonne and Rs 2,500 for 36 passengers per bus.

"Passengers will have an option to travel at Rs 200 for economy class to Rs 400 for luxury for a single trip. For a round trip (To and Fro) it will be Rs.350. We have also tied up with private buses, running services between the two regions. We are also in talks with he Gujarat State Road and Transport Corporation (GSRTC) for the same," added Manral.

According to Manral, every day around 3 thousand trucks and 2 to 2.5 thousand cars travel between the two regions.

"The Gujarat Government is also mulling about starting such services along the other coastal areas of the state. We are also revising our maritime policy accordingly and shortly come out with it," said Sharad Sarangadharan, PRO, GMB.

According to Manral, the Essar company`s passenger jetty will be ready by March at Hazira near Surat.