The kind of investment the sector requires has been made traditionally through a single source and that is the government’s budget and if we continue to be with it then it will take a lot of time. So, this combination of the PPP that is coming in the form of the private train operations will help the sector to grow at a fast pace. 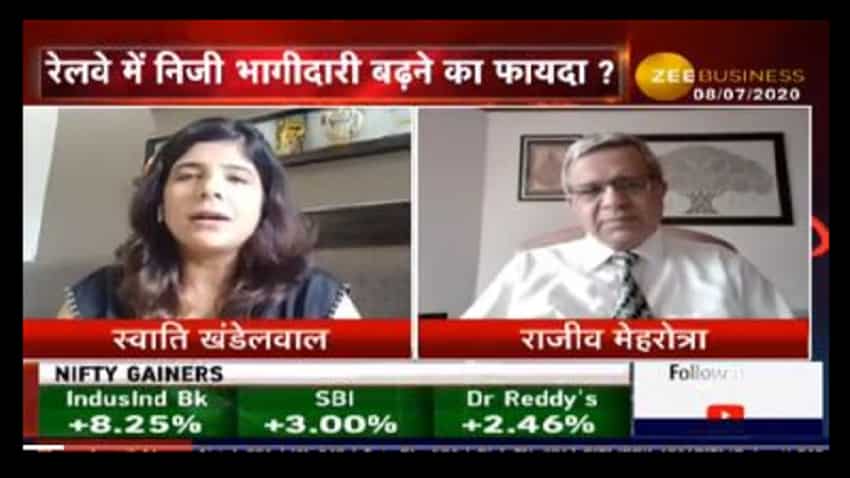 Rajeev Mehrotra, Chairman & Managing Director, RITES Ltd. talks about private players’ participation in operations of trains, opportunities from it, business performance in Q4FY20 and the MoU with Coal India among others during an exclusive interview with Swati Khandelwal, Zee Business. Edited Excerpts:

Q: The government has invited private players to operate trains in a time-bound manner and a detailed meeting has been held on the matter. How excited are you about that particular prospect as we are expecting an investment of up to Rs 30,000 crore in the railway sector? How big opportunity will you consider it for the railway sector?

A: The kind of investment the sector requires has been made traditionally through a single source and that is the government’s budget and if we continue to be with it then it will take a lot of time. So, this combination of the PPP that is coming in the form of the private train operations will help the sector to grow at a fast pace. As far as RITES is concerned then we have its transaction advisory with us. Thus, we already have its consulting. RITES expertise will help us in finding opportunities to grow in it when more trains will come to this area. I feel that this transaction is very important because as a sector it will help to those who are ready to travel on the busy-routes by paying little higher fare instead of waiting in the long waitlist for the tickets. So, it is a very important change in the sector and it will help in bringing investments to the sector.

Q: The company’s domestic business performance in Q4FY20 was good when compared to the international business, where good growth has been seen. What are the trends for FY21 especially performance in Q1 and Q2?

A: All of our businesses are a long-term growth business of infrastructure. RITES has five business segments, namely consulting, the export of rolling stocks, we are the only such company in India who is into the business of locomotive leasing, turnkey executions and energy management for railways, which has grown well in the last 4-5 years. If you have a look at the overall package of RITES then you will find that it is present in growth areas and in the last five years, it has been posting CAGR growth of 20%. These companies must not be evaluated on the basis of a quarter or short-term disruption. Going forward, I would like to say that RITES started the year with a strong order book of Rs 6,223 crore. The two-three months' disruptions have been disruptive for a lot of industry but certain businesses of RITES which were falling under essential services category were running, thus Q1FY21 will not remain blank completely. But we have a strength under which we have been working in India as well as outside India and these factors will help us in repositioning ourselves when normalcy will return. We have also felt the effect of lockdown in many countries where we are working beyond India.

So, comparing the result with the last year’s Q4 is not the right thing.

Q: RITES has renewed its MoU with Coal India Limited for project management consultancy services of the rail infrastructure business, and construction of rapid loading system, coal handling plants and silos for a period of five years. How positive will that be for the company?

A: Companies like Coal India and NTPC have bulk requirement do the rail connectivity projects simultaneously. And in such a situation, if the selective consultants are on-call available with them on standard terms and conditions then you can start and trigger the projects at the earliest. We saw its impact while working with them for the last five years. And, this helped both the management to reach a view to expanding the cooperation further by five years because Coal India and its subsidiaries have several expansion plans that will provide us with an opportunity to associate with them. So, a standard format always remains ready with us and we start working on the projects as soon as it reaches to us. There is no need to negotiate for every project. I think it is an important strength of the company. We have done similar arrangements with many other companies and Coal India is an important client for us.

Q: What will be its financial implications and how it will play an important role in improving your bottom line and by when it will be visible in your books? You also said that you have similar arrangements with other companies as well then let us know about them along with the timeline by which you will renegotiate and increase its period?

A: As far as Coal India contract is concerned then we have been doing their projects and this MoU will cover the new projects that we will get. So, we are executing the projects that we have and its revenue will get its revenue. In an order to give an estimate to the market, we said that we are expecting revenue of over Rs 100 crore from it in the time to come. They have increased the scope in it. Besides, we have similar standard agreements with few power companies as well and it helps us in starting the projects immediately.

Q: You have said that you started the year with an order book or Rs 6,223 crore. What kind of inflow you are seeing from the domestic as well as international sides? How much growth we can see in the order book and name the segments from where you are expecting maximum orders?

A: Predominantly, we will have a focus on the consulting business, which will continue to give 45-50% business to the company. But besides being a consultant, we also have the capacity to bring the add-on businesses. We do export the rolling stocks of locos and coaches, where we sit with the clients to understand and fulfil their design requirement, guide them about where they can be produced and handhold them in respect to maintenance for three to five years. The entire packaging that RITES is doing at present is a result of what we have invested in the last 5-7 years. And as a result of it, we got a very good order from Sri Lanka and executed it. After which, we got a repeat order from the country. We are also getting orders from other countries as well and it includes an important order from Mozambique. We have just signed an order worth Rs 706 with the country in June. I think that India’s export potential can be magnified now and we have moved on that path. We never had an export order book of Rs 1,436 crore in history.

Q: Do you think that there is any project that you can get in immediate future, if yes, then let us know the size of the order?

A: I can just provide an outlook to you, whether it is the African market where we have entered in recent future or the standard gauge prototype that we are making. The standard gauge also has a large market and we haven’t tried it earlier. These factors suggest that exports can provide good growth opportunities to RITES in next 5-10 years. Apart from this, we have a variety in consulting business like railway, airports, ports, highways and metros – we are still working in metro projects of many cities of India as well as we are working in Mauritius metro. This strength of the company can benefit it, if there is any growth in the CapEx in any of these segments, whether it happens in India or outside India. We are keenly waiting for the infrastructure pipeline of the projects and I think that RITES profile will be of help for it when the projects are out.

Q: The company has a good amount of cash with it and there are opportunities. Do you have any acquisition plans going ahead? Are you seeing any consolidation in your business as the government has said that there will be only one to a maximum of 4 PSUs in the strategic sectors?

A: First I would like to answer the second question and it is a policy decision of the government, it is their prerogative. I can’t say anything about it but can just say that companies like RITES that has been working for last 45-46 years and the market have also seen its profile for two years after it got itself listed. So, I feel that if we get such responsibilities of other companies then we are ready to take them. You also had a question related to cash then I would like to say that it is an asset-light model in which the company is working almost free of debts. I used the word almost because we have a small borrowing for the windmill of a power subsidiary. When it comes to cash, then the cash is available with us for opening opportunities. We are doing some investments to build our capacities under which we are enhancing our capacities in some cities in India, setting up laboratories and buy new locomotives for leasing purposes.

But some investments have been made at different places like we have taken 24% stakes in IRSDC, Indian Railway Stations Development Corporation. For 24% equity, we have to invest Rs 48 crore in it. We have also made some investments in solar. The government has announced a scheme of 3 gigawatts for railway procurement and we will make an investment in some portions in it and will go ahead as technical manager in others.

Indian Railways Stocks – IRCTC, IRCON, RITES shares– BUY or NOT to BUY? When to buy? Analyst recommends this – take a look