UP CM Yogi Adityanath on Wednesday revealed details and plans on massive investments in UP, jobs, grand film city and more. 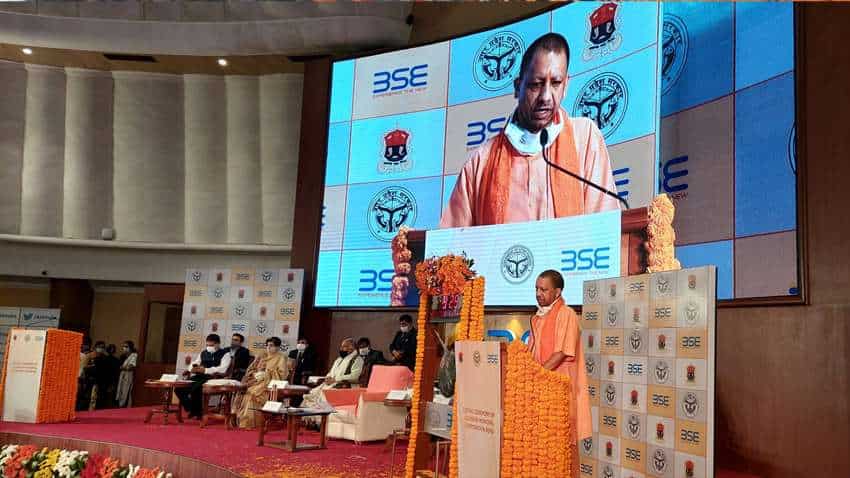 UP CM Yogi Adityanath on Wednesday revealed details and plans on massive investments in UP, jobs, grand film city and more. The UP Chief Minister after ringing the bell for listing of Rs 200 crores Lucknow Municipal bond at Bombay Stock Exchange today, said, "It's a historic moment for us as it's for the first time that any Municipal Corporation of North India has launched such a bond at BSE. Listing of Lucknow Municipal bond is a revolutionary step for Municipality reforms." Uttar Pradesh CM Yogi Adityanath rang the bell at BSE, Mumbai at the listing of bonds of LMC on Wednesday.

Also, UP CM Yogi Adityanath met Tata Group Chairman Natarajan Chandrasekaran in Mumbai and held a discussion on a variety of issues. UP Cabinet Ministers Sidharth Nath Singh and Ashutosh Tandon were also present during the meet.

Further, Yogi held investment-related discussions with corporate giants like Mahindra Defence, Adani, L&T and Siemens as well. Yogi said that his government created 1.25 crore jobs in coronavirus period. Also, he said that in Jewar, fintech city and electronic city will be set up. Yogi said that UP received investment of Rs 3 lakh crore so far. Talking about the plans of grand film city in Jewar, Yogi said, "We want to build a world-class film city in Uttar Pradesh. We held discussions with several producers, directors, actors and other experts related to film industry in this regard."

On being asked about Maharashtra CM saying that he won't allow his state's business to be taken away, Yogi said, "We're not taking anything anywhere. Mumbai Film City will work in Mumbai itself, new Film City in UP is being developed in a new environment according to new requirements."

Yogi added, "Neither we are hurting anyone's investment nor are we hindering anyone's development... It's not 'Pick & Choose'  while attracting investors as Govt has made sartorial policies based on which any investor decides to invest anywhere. It's about trust in govt."

Further, Mohsin Raza, UP minister, said, "Shiv Sena is restless since Yogi Ji announced film city in UP. They've given industry to underworld & are pressurising them to stay in Maharashtra. We aren't taking industry away, will only provide facilities. Unlike Maharashtra, there is no torture here."