The October inflation rate was revised to 3.38 percent from 3.31 percent, and a Reuters poll showed analysts expected 2.8 percent in November, with projections ranging from 2.26 to 2.82 percent. 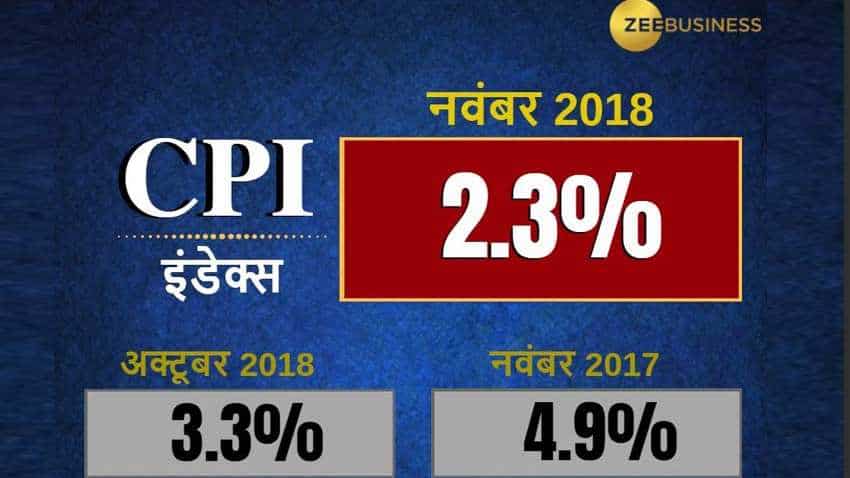 Retail inflation stood at 4.88 per cent in November 2017.
Written By: Reuters
RELATED NEWS

NEW DELHI: India's retail inflation rate dropped in November, which should increase the chances of the new central bank governor keeping interest rates on hold at his first policy meeting, but falling food prices could hurt a ruling party facing a revolt over low farm incomes.

The inflation rate, which includes food and energy prices, fell to 2.33 percent on an annual basis, the smallest increase since June 2017 and remaining below the Reserve Bank of India`s (RBI) medium-term target of 4 percent for a fourth straight month.

The October inflation rate was revised to 3.38 percent from 3.31 percent, and a Reuters poll showed analysts expected 2.8 percent in November, with projections ranging from 2.26 to 2.82 percent.

Falling oil prices in recent months have eased inflationary pressure on India, a major fuel importer. Since early October, Brent crude prices have dropped by nearly 30 percent to about $61 per barrel.

That has helped India`s rupee which has strengthened by around 2 percent against the dollar over the same period after months of record lows.

India`s central bank kept interest rates unchanged at a policy meeting on Dec. 5 to provide support for an economy that has lost some momentum, in a decision that was widely expected as inflation had eased significantly.

The November data came after Shaktikanta Das was appointed RBI governor following the unexpected resignation on Monday of Urjit Patel.

Most economists expect that the central bank`s board, at the new governor`s first policy meeting on Feb. 7, will keep the repo rate unchanged at 6.5 percent if low inflation persists.

"The sharp easing in the headline CPI inflation reflects a combination of favorable factors such as the correction in retail fuel prices (and) discomfiting factors such as a deeper disinflation in food prices," said Aditi Nayar, an economist at ICRA.

Both Nayar and Vivek Kumar, a senior economist at Yes Bank, said they expect the RBI will change their monetary policy stance to `neutral` in February from `calibrated tightening` currently, making a rate rise less likely.

Some economists have even flagged the possibility the RBI could ease monetary policy to support growth.

Food inflation fell to a negative 2.61 percent from a negative 0.86 percent in October, government data showed.

Slowing food prices are a boon for Indian consumers, but hurt the hundreds of millions of farmers that together form a politically-important voting bloc.

India`s ruling party lost power in three key rural states on Tuesday, dealing Prime Minister Narendra Modi his biggest defeat since he took office in 2014 and boosting the opposition ahead of national polls next year.

November core inflation was up 5.7 percent year-on-year in November, versus 6.1 percent in October, according to analysts.

Separately, India`s industrial output expanded at an annual 8.1 percent pace in November, compared with 5.7 percent forecast in a Reuters poll.

"November inflation was in line with our expectation. Inflation is seen rising from here on to hit 4 percent by March.

"Although October IIP (industrial output) surprised on the upside, we believe that growth momentum is slowing.

"With inflation in line with target and FY20 inflation likely seen between 4.5 percent and 5.0 percent, we now ascribe a high probability to the monetary policy committee changing its stance to neutral in the February policy.

"Still high core inflation and uncertain global environment should preclude a rate cut in foreseeable future even as those odds have shortened after the recent change at RBI."

"RBI will likely keep the repo rate unchanged in the next policy. My sense is that they would watch another couple of prints and then possibly by February they will be little more clear about what the trend is.

"They will probably first revisit their stance and then take a call on the repo rate. The MPC (monetary policy committee) will also have to ascertain whether this particular trend on the food side is structural and will sustain over a longer period of time.

"There are certain aspects of the food inflation which are structural and certain aspects which have been unexpected and are likely cyclical. So, the MPC will have to be sure that these are more durable in nature.

"I do not think that the regime change (at the RBI) massively changes the approach to the issues.

"We could see the tone of the policy change, especially with today`s inflation print. I expect the MPC to continue to be more data-driven."

"I was expecting IIP (industrial output) growth at 6 percent and CPI inflation at 2.5 percent.

"CPI has collapsed primarily because of a crash in food inflation. Weaknesses in aggregate demand are reflected in a more benign print for core inflation at 5.73 percent from the previous month`s 6.23 percent.

"IIP growth has been on the back of a strong statistical base, as October of 2017 was a Diwali month and hence, factory activity was weak. Industrial growth may not sustain at 8 percent level. The cumulative growth (number) of 5.1 percent looks more consistent with the ground level factory activity."

"We revise the near-term (CPI) forecast by 50 bps but as of now maintain the FY20 forecast as unchanged as actual inflation fell short of the earlier projected numbers.

"Yet, we think lower than expected numbers in food and fuel are more because of cyclical rather than structural factors. So we are not as yet ready to revise the medium to long-term impacts.

"Less than six months back, the RBI changed the monetary policy stance from neutral to calibrated tightening. The RBI also clarified that the change in stance means that rate cut option is off the table. In view of this, we expect RBI to maintain status quo in the near future.

"Monetary policy decision is taken by the MPC of which only one member has changed. So I do not think it would substantially alter the thinking of MPC about growth and inflation.

"Today`s data shows acceleration of growth (IIP) and deceleration of inflation. So the picture is mixed. I think RBI would wait to understand the changes (cyclical and structural aspects) of growth and inflation before taking a definite view on this."

"The November CPI inflation print reinforces the overwhelming impact of subdued food prices. Encouragingly, after the spike seen last month, core inflation has moderated to 5.7 percent, its lowest in FY19 so far.

"Overall, the picture on inflation is likely to provide comfort to the RBI and we continue to expect a change in the monetary policy stance to `neutral` in February (2019) from `calibrated tightening` currently."

"The sharp easing in the headline CPI inflation reflects a combination of favorable factors such as the correction in retail fuel prices, discomfiting factors such as a deeper disinflation in food prices, and base effects related to the waning impact of the HRA revision for central government employees.

"In our view, factors such as weak post-monsoon rainfall and lagging rabi sowing cast some doubt on how long food prices would remain in the disinflation zone.

"While it is too early to assess whether a rate cut would be forthcoming in the February 2019 (monetary policy committee) review, there is a significant likelihood of a change in the monetary policy stance back to `neutral` from `calibrated tightening`. This is likely to serve as a precursor to a repo rate cut in Q1 FY2020, if inflationary risks remain in check."