Rafale deal cleared, to be signed on Friday

Defence sources said that deal for the aircraft, the first fighter jet deal in 20 years, comes with a saving of nearly 750 million Euros than the UPA era one, which was scrapped by the Narendra Modi government, besides a 50 per cent offset clause. 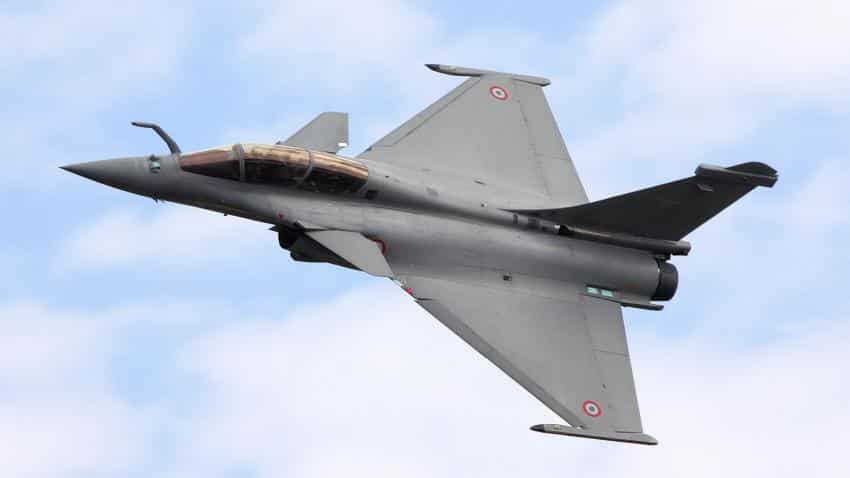 The government has cleared the much anticipated deal with France for 36 Rafale fighter jets which will cost 7.878 billion Euros and will be signed on Friday. Photo: Wikipedia
Written By: PTI
RELATED NEWS

The government has cleared the much anticipated deal with France for 36 Rafale fighter jets which will cost 7.878 billion Euros and will be signed on Friday in the presence of French Defence Minister Jean Yves Le Drian.

Defence sources said that deal for the aircraft, the first fighter jet deal in 20 years, comes with a saving of nearly 750 million Euros than the UPA era one, which was scrapped by the Narendra Modi government, besides a 50 per cent offset clause.

This means business worth at least three billion Euros for Indian companies, both big and small, and generating hundreds of jobs in India through offsets.

The Rafale fighter jets, deliveries of which will start in 36 months and finished in 66 months from the date contract is inked, comes equipped with state-of-the-art missiles like Meteor and Scalp that will give the

IAF a capability that had been sorely missing in its arsenal.

Sources said the government today formally cleared the Inter Governmental Agreement to be signed on Friday in the presence of Drian who arrives tomorrow evening along with CEOs of Dassault Aviation, Thales and MBDA and top government officials.

The contract for the deal was already cleared by the Cabinet Committee on Security earlier. The price of the contract was fixed in May, sources said.

Sources said the "vanila price" (just the 36 aircraft) is about 3.42 billion Euros. The armaments cost about 710 million Euros while Indian specific changes, including integration of Israeli helmet mounted displays, will cost 1700 million Euros.

Rest of the cost include spare parts, maintenance among others.

Besides other features that make the Rafale a strategic weapon in the hands of the IAF is the Beyond Visual Range Meteor air-to-air missile with a range in excess of 150 KM.

Its integration on the Rafale jets will mean the IAF can hit targets inside both Pakistan and across the northern and eastern borders while still staying within India's own territorial boundary.

Pakistan currently has only a BVR with 80 km range. During the Kargil war, India used a BVR of 50 km while Pakistan had none. With Meteor, the balance of power in the air space has again tilted in India's favour.

Scalp, a long-range air-to-ground cruise missile with a range in excess of 300 km also gives the IAF an edge over its adversaries.

The tough negotiations by the MoD-IAF team extracted many concessions and discounts from the French before arriving at a price that is almost 750 million Euros less than what was being quoted by the French side in January 2016.

This was when the commercial negotiations gathered pace, almost seven months after Prime Minister Narendra Modi announced India's intention to buy 36 Rafales off the shelf from France during his trip to Paris in April 2015.

The French side had quoted a price of 8.6 billion Euros in January following which India refused to sign the contract.

This forced both the countries to just sign a MoU and French President Francois Hollande's announcing their intention to sign an IGA.

To bring down the cost, the India asked French officials to calculate the deal on actual cost (Price as on today) plus European Inflation Indices.

After Dassault Aviation, makers of the Rafales, emerged as winners, the UPA government had agreed with French officials to calculate the price on the fixed cost formula that allowed the company to include additional price of 3.9 per cent inflation indices from day 1 of the deal.

So, had the deal gone ahead, India would have ended up paying additional cost of inflation Indices (@3.9 per cent) which was already added at the initial negotiation itself.

Moreover, there was confusion on the calculation of the basic price itself.

In the original MMRCA proposal, 18 planes were to be manufactured in France and 108 in India in collaboration with the HAL.

It was later discovered that the cost of 108 fighters would go up by about Rs 150 crore per plane since the labour man hours in India were 2.7 times higher than in France, raising questions about the French firm being the lowest bidder.

Interestingly, then Defence Minister A K Antony had put down on file a remark that the negotiating team must come back to him before finalising the contract, creating more confusion for the negotiators.

For instance, Dassault will have to ensure that at least 75 per cent of the entire fleet remains operational at any given time. This warranty is signed for the first five years.

Despite several steps taken by the Defence Ministry over the last three years, 60 per cent of India's frontline fighters, the Sukhoi-30 fleet, remains operational at any given time, up from the dismal 48 per cent earlier, sources said.

Three other concessions include free training for nine IAF personnel, including three pilots besides additional guarantee for 60 hours of usage of training aircraft for Indian pilots and six months of free weapons storage without charge (in case the Indian infrastructure is not ready for storing the weapons).