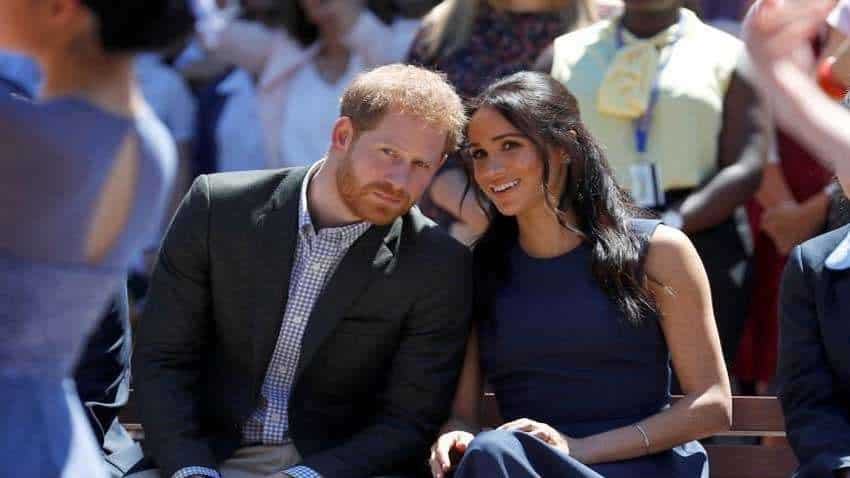 Meghan, on son Archie not being a prince or receiving a title:

"They didn`t want him to be a prince or princess, not knowing what the gender would be, which would be different from protocol, and (said) that he wasn`t going to receive security.

"In those months when I was pregnant ... we have in tandem the conversation of, you won`t be given security, not gonna be given a title and also concerns and conversations about how dark his skin might be when he`s born.

Meghan declined to name who expressed those concerns: "I think that would be very damaging to them."

Asked about it, Harry said: "That conversation, I`m never going to share. But at the time, it was awkward. I was a bit shocked."

"That was right at the beginning when she wasn`t going to get security, when members of my family were suggesting that she carries on acting because there`s not enough money to pay for her, and all this sort of stuff. There were some real obvious signs, before we even got married, that this was going to be really hard."

"I just didn`t want to be alive anymore. And that was a very clear and real and frightening constant thought. And I remember how he (Harry) just cradled me."

She said she went to senior people in the institution to ask for help.

"I went to the institution and I said that I needed to go somewhere to get help ... And I was told that I couldn`t, that it wouldn`t be good for the institution.

"I remember this conversation like it was yesterday, because they said, my heart goes out to you because I see how bad it is, but there`s nothing we can do to protect you because you`re not a paid employee of the institution.

"This wasn`t a choice. This was emails and begging for help, saying very specifically I am concerned for my mental welfare."

Asked if she thinking of harming herself, or having suicidal thoughts, she said:

Harry, asked whether he told his family about his plans to step away from his royal roles and about a newspaper story that they had "blindsided" the queen with their decision:

"I`ve never blindsided my grandmother, I have too much respect for her."

Asked where the story came from, he said: "I`d hazard a guess that it probably could have come from within the institution."

Asked why Prince Charles had stopped taking his calls:

"By that point I took matters into my own hands, it was like, I needed to do this for my family. This is not a surprise to anybody. It`s really sad that it`s got to this point, but I`ve got to do something for my own mental health, my wife`s and for Archie`s as well."

Harry, on media behaviour echoing that his mother Princess Diana faced before her death in a Paris car crash in 1997:

Meghan, on a newspaper story that she made Prince William`s wife Kate cry over flower girls` dresses before Meghan and Harry`s wedding:

"The narrative with Kate, which didn`t happen, was really, really difficult and something that I think that`s when everything changed really."

Asked if she made Kate cry: "The reverse happened. A few days before the wedding she was upset about something, pertaining to ... the flower girl dresses, and it made me cry. And it really hurt my feelings."

"There wasn`t a confrontation and ... I don`t think it`s fair to her to get into the details of that because she apologised, and I forgiven her. What was hard to get over was being blamed for something that not only I didn`t do, but that happened to me.

"I`m not sharing that piece about Kate in any way to be disparaging to her."

Meghan, asked if she was silent or had been silenced:

"The latter. Everyone in my world was given a very clear directive from the moment the world knew Harry and I were dating to always say no comment."

Meghan said she believed she was being protected by the royal institution.

"It was only once we were married and everything started to really worsen that I came to understand that not only was I not being protected but that they were willing to lie to protect other members of the family. But they weren`t willing to tell the truth to protect me and my husband."

Asked if she was not supported by the powers that be, she said: "There`s the family, and then there`s the people that are running the institution, those are two separate things and it`s important to be able to compartmentalise that because the queen, for example, has always been wonderful to me."

Harry, asked whether he would have stepped away from the royal family if it had not been for Meghan:

"The answer to your question is no ... I wouldn`t have been able to, because I myself was trapped.

"I was trapped but I didn`t know I was trapped. Like the rest of my family are, my father and my brother, they are trapped. They don`t get to leave and I have huge compassion for that."

"It`s a very trapping environment that a lot of them are stuck in. I didn`t have anyone to turn to.

"For the family they very much have this mentality of `This is just how it is, this is how it`s meant to be, you can`t change it, we`ve all been through it.

"What was different for me was the race element, because now it wasn`t just about her. It was about what she represented."

Harry, on the royal family failing to speak out about the racist articles written about Meghan:

"That hurts, but I also am acutely aware of where my family stand and how scared they are of the tabloids turning on them."

Meghan, on allegations she had manipulated the whole situation:

"Can you imagine how little sense that makes? I left my career, my life, I left everything because I love him, and our plan was to do this forever."

Meghan, about her wedding day:

"It was like having an out-of-body experience ... I think we were both really aware, even in advance of that, this wasn`t our day, this was the day that was planned for the world."

Meghan, on marrying into the royal family:

"I will say I went into it naively because I didn`t grow up knowing much about the royal family. I didn`t fully understand what the job was."