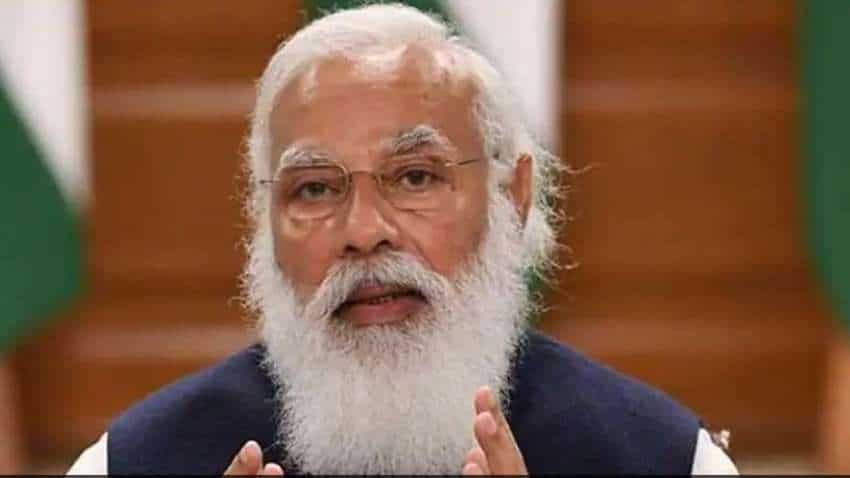 Modi also paid tributes to former UP CM Kalyan Singh, saying he would have felt happy after seeing the progress of Aligarh. Source: PIB
Written By: PTI
RELATED NEWS

Prime Minister Narendra Modi on Tuesday said it is the country's misfortune that generations were not made aware of sacrifices of national heroes, citing example Raja Mahendra Pratap Singh, in whose name a university will come up in Aligarh.

The PM said this after laying the foundation stone of the university.

Modi also paid tributes to former UP CM Kalyan Singh, saying he would have felt happy after seeing the progress of Aligarh.

"Today, I am feeling the absence of the great son of soil, Kalyan Singh. Had he been alive, he would have felt happy seeing the new identity of Aligarh in terms of a node of the UP Defence Industrial Corridor and Raja Mahendra Pratap Singh State University. Wherever his soul is, it would be blessing us," Modi said.

It was the country's misfortune that generations were not told about sacrifices of freedom fighters like Raja Mahendra Pratap Singh.

Many generations of the country were deprived of their stories and tales, the PM said, adding that the 21st century India is correcting these mistakes of the 20th century.

Today, an honest effort is being made to make the new generation aware about contributions of Maharaj Suheldevji, Deenbandhu Chaudhary Chhotu Ramji or Raja Mahendra Pratap Singhji, Modi said.

"Today, when the youth sees big dreams, they should remember and study about Raja Mahendra Pratap Singh as it imparts lessons of tremendous willpower," the PM said.

"He went to different parts of the world, including Afghanistan, Poland, Japan and South Africa for India's independence," Modi said.

"Around World War-1, he went to Europe to meet Lala Hardayal and especially Shyamji Krishna Verma and it was the result of that meeting that the first government-in-exile of India was established in Afghanistan," the PM said.

"This government was headed by Raja Mahendra Pratap Singh. Today, as PM, I feel honoured to lay the foundation of a university named after a visionary and great freedom fighter. He not only fought for India's independence but also actively contributed to laying the foundation of India's future," Modi stressed.

He used the experience gathered from touring various parts of the country and the world to modernise the education system, Modi said, adding that the freedom fighter established a modern technical college in Vrindavan, using his own resources and donating his ancestral property.

"He donated big land for the AMU," Modi said.

The PM said as India is making strides towards a new era of education and skill, the construction of a university named after the son of the soil is a true tribute.

This university will become a centre of modern education, he said.

UP hikes sugarcane purchase price by Rs 25 per quintal