Prime Minister Modi while addressing the Probationers of Indian Civil Services attending the Foundational Course, outlined the big picture of `the mission and delivery` that the officers manning the famed `steel frame` of India were expected to measure up to in their long years of duty ahead. 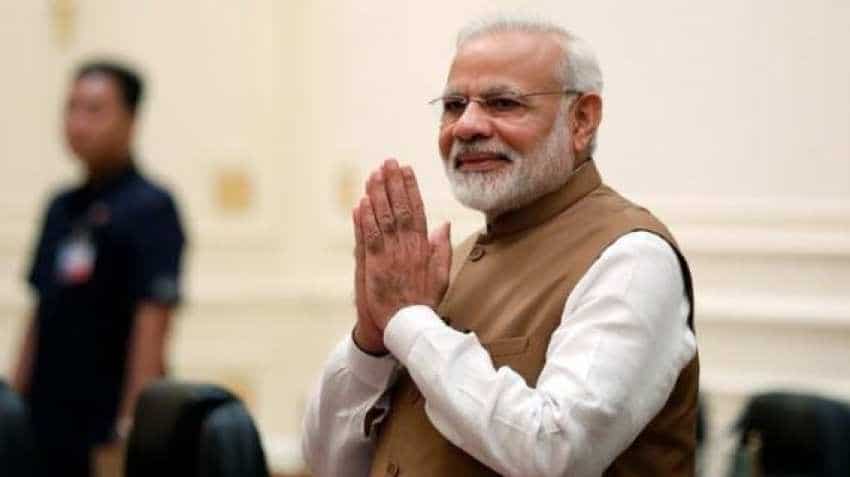 The Prime Minister, in fact, spent the better part of the day with them. The profound message coming from him was that the officers of the All India Services were meant to work with a `national mindset'. Reuters

With a remarkable insight into how the governance in this country ought to be upgraded, Prime Minister Modi while addressing the Probationers of Indian Civil Services attending the Foundational Course, outlined the big picture of `the mission and delivery` that the officers manning the famed `steel frame` of India were expected to measure up to in their long years of duty ahead. In a first time event, the officers who were in the early phase of their training were assembled at a place outside of the LBSNAA Mussoorie -- at Kevadia in Gujarat, the venue of Sardar Patel`s statue -- for the Prime Minister`s address on October 31 marking the National Unity Day.

The Prime Minister, in fact, spent the better part of the day with them. The profound message coming from him was that the officers of the All India Services were meant to work with a `national mindset` regardless of what posts they held and that they must rise above domestic divisions of caste, creed and region to always decide on what would be in the larger interest of the nation and the common man. It is presumed that the Director LBSNAA, who was part of the planning of this important event, would have the full address of the PM placed in the libraries of the Mussoorie Academy as well as the premier training institutes of all national civil services.

The three most important points of strategic guidance that Prime Minister Narendra Modi presented to the young officers were that they should consider themselves primarily as service providers, that they should work for the higher objective of promoting `ease of living` keeping the poorest in view and that they must not get into the habit of shunning decision making and yielding to the status quo. He reminded them that the bigger opportunities `that the nation was providing them` also exposed them to higher responsibilities and told them upfront that negative perceptions about bureaucracy had to be ended. Perhaps the most incisive comment the Prime Minister made was that governance should neither have a `suppressive impact` nor should it be ineffective to the point of creating the illusion that there was `no government` in place. This last is the crux of what needs to happen in India by way of a demonstrable reform in governance.

Bureaucracy likes to work on the borrowed strength of its political masters and not on the foundation of sound judgement dictated by its own in-depth experience of years of public service. There is no other country that provides the equivalent of IAS and IPS in terms of the high starting point of a career in civil service that a meritorious young person gets -- making one the Collector, a virtual `king` of a big territory called the District and the other the SSP, a Commander in Chief of thousands of armed men in uniform and personnel of the civil police there -- all in the course of just 5-6 years of service.

It is ironic that in their journey up the promotion ladder, they become reclusive and desk bound and tend to lose out on their role as a mentor for their juniors. Prime Minister Modi did not forget to remind the probationers that their outreach to the people must not diminish and convey it to the seniors in the administration and the police that the old tradition of an outgoing officer leaving behind instructive `notes` for his successor deserved to be restored. It is difficult to find another example of the chief of the political executive governing a big democracy like India`s, himself giving such explicit apolitical advice to the bureaucracy on how to improve upon its working.

In a subtle mentoring of the young officers done by the Prime Minister himself, he enthused them to believe that they were uniquely placed to improve the `ecosystem of governance` for the nation`s `capacity building`. He suggested that in the first years of their posting amongst the people in a district, they should work for `one district, one problem, total solution`. This is an extremely thoughtful way of getting the most productive results out of the initial years of the civil services officers when they were still fired with passion for work and relatively unspoilt by extraneous influences.

In fact, there is a case for India `going back to the districts` for governance as the collector and SSP between themselves can monitor both development and security in their district segment. This tradition has broken down because their seniors -- chief secretary and DGP -- do not back them for reasons that are known. The centre must find a way of having a say in the appointment of these two top officials -- the Supreme Court has already facilitated this process in respect of the DGP which should be replicated for the appointment of the chief secretary as well. The crucial point is about UPSC drawing up a panel in consultation with the state government for the purpose -- an idea supported by the apex court implicitly on the ground that the centre had a responsibility for tracking the performance of IAS and IPS officers whom it recruits and trains before it allocates them to the states.

Prime Minister Modi`s address at Kevadia touched on a basic principle of governance -- it should provide stability without becoming suppressive. In the name of sending out a message that India had a `strong` government, the bureaucracy including the enforcement agencies are beginning to exercise their power in a manner that impacted adversely the average law abiding citizen -- not primarily the big offenders. The two major coercive instruments of a democratic state -- police and tax collectors -- need to be on a responsible course to avoid creating the impression that they were out to `rule` the people and not serve them.

In Delhi, the traffic police is busy sending over speeding notices without specifying the excess speed recorded in each case while no effort is made to detect `lane surfing` -- a dangerous form of driving -- that would require hard work on the part of the policemen. On the tax front, a long retired senior official, an octogenarian, who had received appreciation letters for tax payments was hauled up for some omission in the IT return that he had filed 11 years ago. The old man had to endure a long correspondence to establish that it is the computerised IT system that had failed to record certain entries.

Apparently an army of junior functionaries deployed for making a `total scan` is exercising no discretion about concentrating on high income businessmen and professionals rather than on government servants. In the Modi regime, the responsibility of supervising senior officers has to be pushed up in the interest of governance. Just as Home Minister Amit Shah is directly overseeing the functioning of the internal security machinery, other ministers must take charge of the performance of their bureaucrats in terms of their public service orientation and pro-people decision making.

(The writer is a former Director Intelligence Bureau. The views expressed are personal)