Prime Minister Narendra Modi on Sunday said India is going through major social and economic changes and the resultant New India will prove to be a catalyst for global growth. 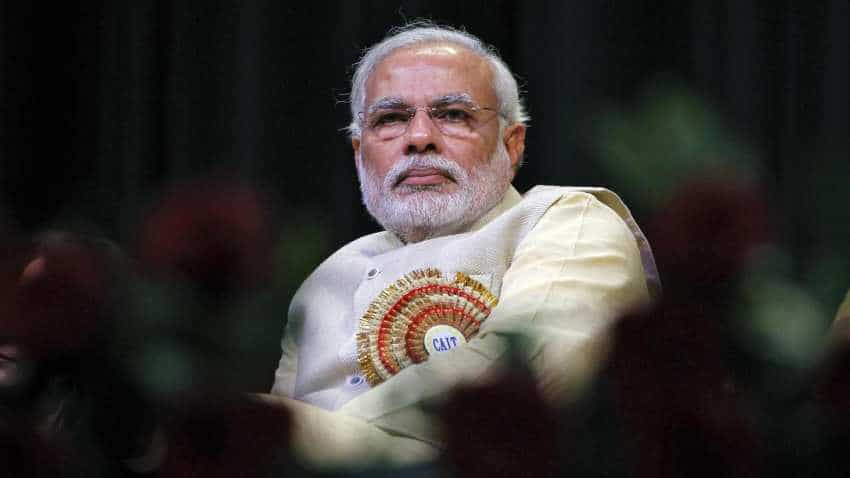 Modi said the Goods and Services Tax (GST) had been the "biggest tax reform since independence" that had made the entire country a single market and widened the tax base. Image Source: Reuters
Written By: IANS
RELATED NEWS

Prime Minister Narendra Modi on Sunday said India is going through major social and economic changes and the resultant New India will prove to be a catalyst for global growth.

"India is witnessing rapid economic and social changes. The country is going through a big transformation. We are marching towards a New India," Modi said at Uttarakhand`s maiden Investors Summit here.

"Every major institution in the world is predicting that in the coming decades, India is going to be the driving engine of world growth," he said, adding that the country was witnessing the "best conducive environment" for business and investment.

Modi said India`s economy had stabilized over the last few years, fiscal deficit had come down, inflation was under control and the middle class was rising.

"The scale and speed at which reforms are happening are unprecedented. In the last two years, the central and state governments have ushered in more than 10,000 reforms. Thanks to this, India has made a significant jump of 42 points in the global `ease of doing business index," the Prime Minister said.

"As part of these reforms, more than 1,400 laws have been repealed. Major tax reforms have been brought in. The Insolvency and Bankruptcy Code (IBC) has made doing business easier and strengthened the banking system."

Modi said the Goods and Services Tax (GST) had been the "biggest tax reform since independence" that had made the entire country a single market and widened the tax base.

He said infrastructure development was taking place at a "record speed" with more than 10,000 km of national highways built in just the last one year. "It means over 27 km road built per day. This rate is double as compared to road development during previous governments."

Modi said the government had initiated modernization of 400 railway stations, was building 100 new airports and helipads and was working on setting up 100 waterways. He also listed down schemes like `housing for all`, `health for all`, `banking for all` among others.

Inviting investors to participate in the world`s largest healthcare scheme, Modi said the `Ayushman Bharat` had opened up huge opportunities in the health sector, mainly in the tier-2 and tier-3 cities, in terms of hospitals, doctors, paramedics and medicines.

"The scheme gives coverage to a population more than America, Canada and Mexico combined. This population is more than that of entire Europe. And for this market, the payment is ready. This offers the biggest opportunity in the country."

Turning his focus to Uttarakhand, the Prime Minister said the young state was a shining example of what the New India represents and there was great potential to be tapped.

"Today, Uttarakhand is moving fast on the economic development path," he said and expressed his hope that the agreements signed during the two-day event soon comes on the ground so that the people get jobs and other benefits.

Modi recalled how as Chief Minister of Gujarat he said he wanted to emulate South Korea when people expected him to mention America or the UK. He said there were a lot of similarities between Gujarat and South Korea.

"Our states have more potential than many countries and each state can work towards it based on its competence," he said. "Today, fortunately there is a healthy competition among the states and no state would lag behind if they work on their respective strengths."

Modi said Uttarakhand nestled among the Himalayas and was blessed with the Ganga. It also had a special SEZ which was different from the usual Special Economic Zone. "It is Spiritual Eco-Zone which is many times more powerful than the typical SEZ."