Prime Minister Narendra Modi on Tuesday told overseas Indians that his government is making efforts to ease the processes concerning their social security, passport, visa and PIO and OCI cards and that work is on to issue chip-based e-passports. 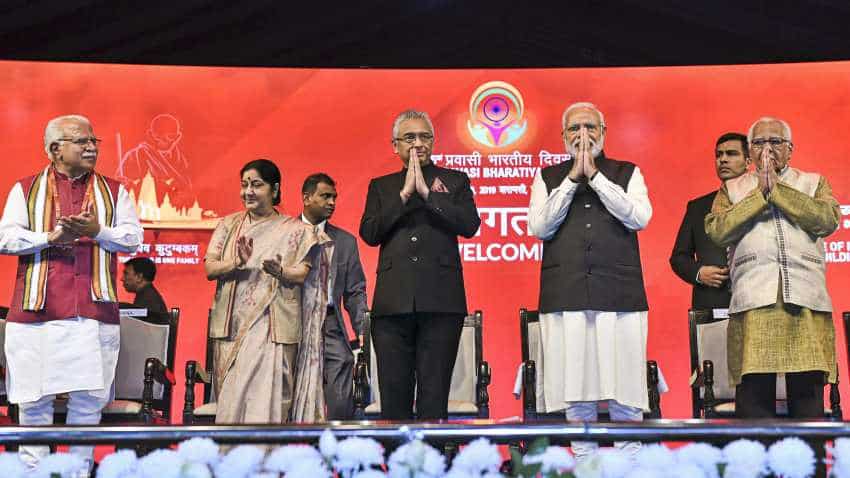 Prime Minister Narendra Modi on Tuesday told overseas Indians that his government is making efforts to ease the processes concerning their social security, passport, visa and PIO and OCI cards and that work is on to issue chip-based e-passports. Inaugurating this year`s Pravasi Bharatiya Divas (PBD), the Indian diaspora conclave, he said that the government`s endeavour was that overseas Indians should stay "happy and safe wherever they are".

"The government is trying to ease the entire processes concerning your social security, passport, visa, Persons of Indian Origin (PIO) and Overseas Citizen of India (OCI) Cards. We have taken a new step a few months back concerning overseas Indians. Our embassies and consulates are being connected to the Passport Seva Project worldwide," he said.

This, he said, will prepare a centralized system connected to the passport service for all of them. "Going one step ahead, work is on for issuing of the chip-based e-passport." The Prime Minister said that along with passport, the rules related to visa were being simplified.

"With the convenience of e-visa, you are also saving time and problems are also getting reduced.  "Many of you will also be familiar with the fact that our government has made the process of converting PIO (Person of Indian Origin) cards into OCI (Overseas Citizen of India) cards."

Modi also urged Indians or people of Indian living abroad to contribute to the building of a new India and said that the changes that were coming in India were becoming new opportunities.  "In this changing India, you can play a big role in research and development and innovation.

"The government is also trying to bring Indian start-ups and NRI mentors together on one platform. Defence manufacturing can also be an important sector for you." Modi urged Indians living abroad to motivate at least five families around them to come to India. "Your efforts will play an important role in enhancing tourism in the country."

He said that in the last four years, India had taken a major step towards achieving its natural position in the world.  "People used to say that India cannot change," he said. "We have changed this thinking. We have made changes." Stating that today India led the world in many fields, he said the International Solar Alliance was one such example.

"It is also part of our goal of preparing solutions to India`s problems, that can also solve the problems of other countries. We are working with the application of local solution, global application." Modi added: "In the last four-and-a-half years, more than two lakh Indians stranded in crisis situations abroad have been helped by the government and its efforts."

Ahead of this year`s general elections, Modi also launched an attack on the Congress over the issue of corruption citing a quote by former Prime Minister Rajiv Gandhi. "He said that only 15 percent of the money that the central government sends from Delhi reach the people."

Modi said no attempt was made by the Congress to stop this loot. "The country`s middle class continued to pay taxes honestly, and 85 per cent of this loot continued." But his government was using technology to eliminate this loot.  Modi`s Mauritius counterpart Pravind Jugnauth, the chief guest at the event, commended India`s efforts in reaching out to the diaspora.

Modi called this year`s PBD the "most successful" event saying the people of Varanasi, his Lok Sabha constituency, have taken ownership of the three-day jamboree.