PAN card-Aadhaar card link deadline extended: But, what happens if process is not completed even till September 2019?

The Aadhaar card has become a new face and a very vital form of identification for government and citizen, which is why, they have been asking whoever holds a PAN card to link it with Aadhaar card. 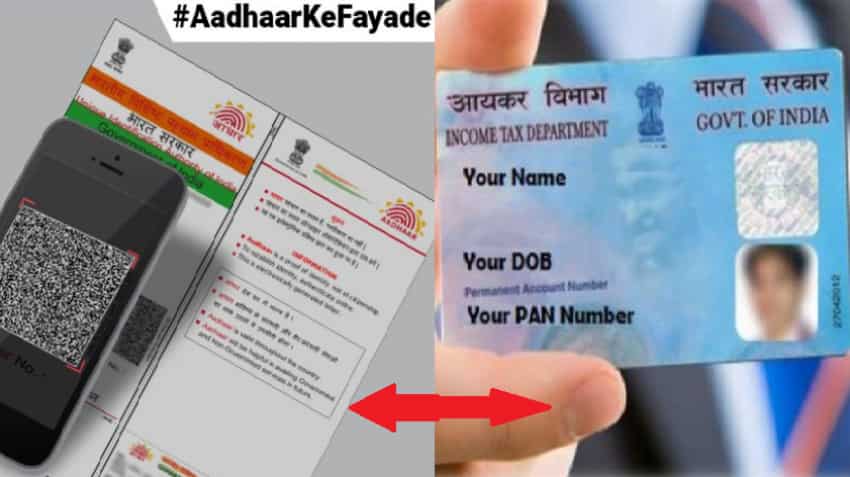 Aadhaar alert! This UIDAI service lets you know when, where and how of Aadhaar past usage

Aadhaar card latest update: This number is solution to all your Aadhaar-related queries

The Income Tax department provided a major relief when it extended the deadline to link Permanent Account Number (PAN) card with 12-digit biometric Aadhaar number. The latter has already become a vital form of identification for the government as well as citizens. But, getting everyone to link their PAN card with Aadhaar card isn't an easy task. There are many who have not followed the new rule which was set in place in June 2017. This forced the the department to extend the deadline again, this time to September 2019.

This would be six months breather to a PAN card holder, however, from April 01, a taxpayer has to file their ITR which cannot be done without Aadhaar linked with PAN. Hence, you might as well decide to just remove few minutes and link your PAN with Aadhaar.

Talking about Aadhaar - PAN deadline extension, Archit Gupta, Founder & CEO at ClearTax said, “The due date to link aadhaar with the PAN was 31 March 2019. However, the Income Tax Department (ITD) has extended the due date to link your aadhaar number with PAN to 30 September 2019. Though, w.e.f. 1 April 2019, it is mandatory to quote and link Aadhaar number while filing the ITR, unless specifically exempted.”

Interestingly, Gupta added that, “As mentioned earlier, the deadline has been extended. Even though section 139AA lays down that unlinked PANs may become invalid, since there is still time until 30 September 2019, the PAN remains valid till further notification from the department.”

Sure you have six months of relaxation and you can take your own time in linking PAN with Aadhaar. Even, you can also file your ITR somewhere in between the year. But there is always a loophole for being lazy when it comes to complying with legality.

The section 139AA sub-section 2 highlights that, every person who has been allotted permanent account number as on the 1st day of July, 2017, and who is eligible to obtain Aadhaar number, shall intimate his Aadhaar number to such authority in such form and manner as may be prescribed, on or before a date to be notified by the Central Government in the Official Gazette.

In case of failure to intimate Aadhaar number, the PAN card allotted to that person will become invalid.

Remember the word invalid, because if your PAN becomes inactive, there are possibilities for facing penalties. How? Let’s find out!

The moment your PAN becomes invalid, it means that you are eligible to have a PAN but you do not have it.

According to section 272B of IT Act, there will be penalty in case of default by the taxpayer in complying with the provisions relating to PAN. These are not obtaining PAN even when he or she is liable to obtain PAN or knowingly quoting incorrect PAN in any prescribed document or intimating incorrect PAN to the person deducing tax or person collecting tax or having more than one PAN.

With PAN becoming invalid, you will have to apply for a new PAN card. Then for new PAN application you will have to pay Rs 101 which includes fees of Rs 86 and Rs 15.48 as GST tax rate at 18%. If the physical PAN is dispatched outside India, then charges are 10 times higher to Rs 1,011 which includes Rs 857 as fees and Rs 154.26 as GST tax rate at 18%. However, for citizens whose PAN is invalid, and are applying for new one will have possibilities of more charges.

Hence, why waste time and money, if you can just link your PAN with Aadhaar for filing of ITR and other services will become quite easier. However, what will be new guidelines post September 2019, will be something to watch in regards to PAN card.

Aadhaar alert! This UIDAI service lets you know when, where and how of Aadhaar past usage

Aadhaar card latest update: This number is solution to all your Aadhaar-related queries