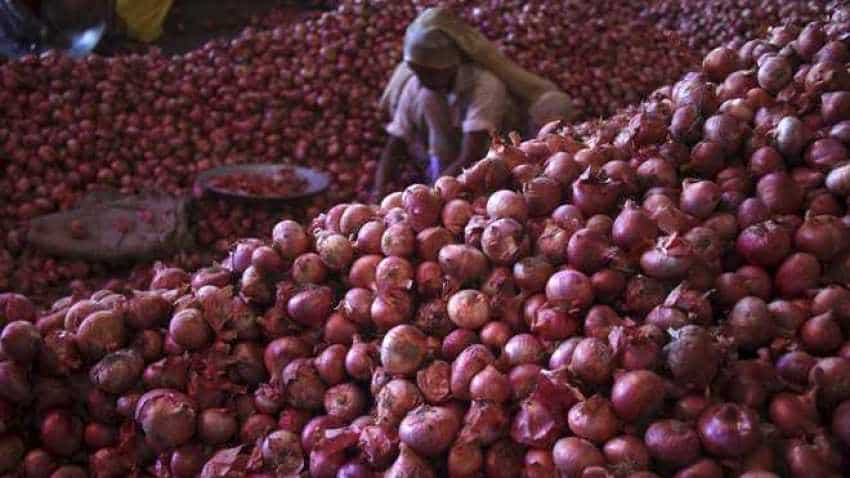 As per the estimate provided by the Mandi official, the wholesale price for onion was 90 paise per kilogram while it was Rs two for garlic. Representational Image, source: Reuters
Written By: PTI
RELATED NEWS

Tomatoes selling below Re 1 per kg in Delhi wholesale markets

Prices of onion and garlic have dropped to between 50-90 paise and Rs 2 per kilogram respectively in Madhya Pradesh's Neemuch Mandi, leading to distress among farmers. While some of them returned without placing their produce for sale, others dumped it in the market and left, said officials Tuesday.

An official, however, said the lower rates were mainly for that part of the stock which was of poor quality, adding that oversupply was a factor in bringing down prices.

As per the estimate provided by the Mandi official, the wholesale price for onion was 90 paise per kilogram while it was Rs two for garlic.

However, Indarmal Patidar, a farmer from Kelukheda village of Neemuch district, said he was offered a much lower price -- of 50 paise per kilogram when he arrived to sell his onion stock of 15 quintals. "I came to know when reached I Neemuch Mandi that its rate had reduced to 50 paise per kilogram. So I decided to take back my crop and feed it to cattle," Patidar said.

Another farmer, from Rajasthan's Marjivi village, Mahesh Kumar, said he was leaving his crop behind in the Mandi as he was not getting proper rates and taking it back would entail transportation costs.

The garlic crop was also sold as low as Rs two per kilogram at the Mandi with Rajesh, a farmer from Badnawar, claiming that he arrived at the market on Sunday but was yet to sell his stock due to lack of remunerative rates. He said the prevailing rates would not even cover the cost of production.

Meanwhile, Shrivastava said, "Oversupply may also have caused a fall in prices of these crops. However, of the 5000 quintals that reached the Mandi, only 25-30 quintals of onion was sold below the rate of Rs 100 per quintal. This was because of poor quality," he said.

The Neemuch Mandi secretary said that, similarly, the garlic sold at lower price was of poor quality as well.

Tomatoes selling below Re 1 per kg in Delhi wholesale markets