India vs Australia Brisbane Test: Virat Kohli, Sachin Tendulkar, Virender Sehwag, Mohammed Shami, Shikhar Dhawan to Sundar Pichai, all got online to congratulate Team India on beating Australia in Test series. a standing ovation for India's wounded warriors "Every session we discovered a new hero," Sachin Tendulkar put it aptly as an injury-ravaged India's come-from-behind triumph over Australia earned them unbridled appreciation from the cricket fraternity as well as several other notable personalities. 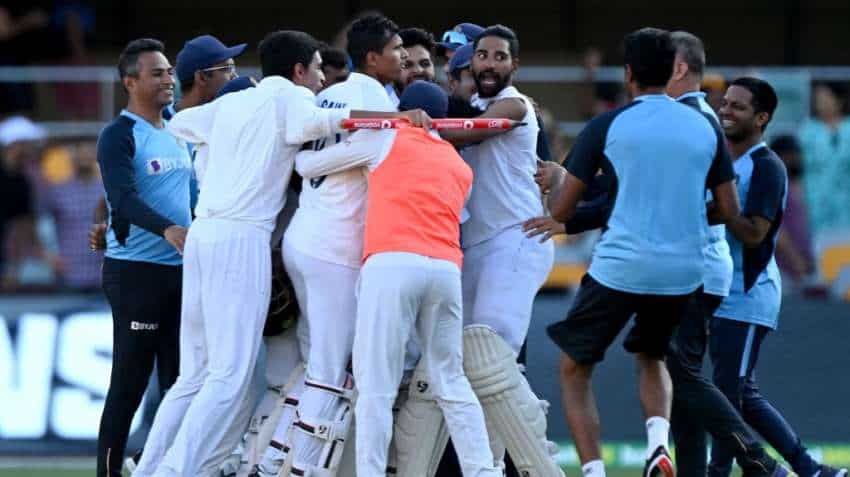 Despite losing key players to injury, India chased down a mammoth 328 in the fourth and final Test, ending Australia's 32-year unbeaten run at Brisbane to clinch the series 2-1 and retain the Border-Gavaskar trophy.

Prime Minister Narendra Modi was one of the first to congratulate the team, complimenting it for its passion and energy.

"We are all overjoyed at the success of the Indian Cricket Team in Australia. Their remarkable energy and passion was visible throughout. So was their stellar intent, remarkable grit and determination. Congratulations to the team! Best wishes for your future endeavours," he tweeted.

How would you like to eat your words? Grilled, fried, baked...wrapped in a chapati or dosa? pic.twitter.com/nZs3Z2N8Fa

Tendulkar lauded the fact that every member of the team took responsibility to take the side across the line at some point during the series.

"Every time we got hit, we stayed put & stood taller. We pushed boundaries of belief to play fearless but not careless cricket. Injuries & uncertainties were countered with poise & confidence. One of the greatest series wins! Congrats India," he said.

Regular skipper Virat Kohli, who is on paternity leave, was delighted by the team's grit and determination after the Adelaide humiliation. He had famously asked everyone not make a mountain out of a molehill after the side was dismissed for its lowest Test score of 36 in the opening match, which it lost.

"WHAT A WIN!!! Yessssss. To everyone who doubted us after Adelaide, stand up and take notice. Exemplary performance but the grit and determination was the standout for us the whole way. Well done to all the boys and the management. Enjoy this historic feat lads. @BCCI.

Current and former players also praised the team for pulling off a win despite facing several adversities.

Here is a look at the reactions that followed the extraordinary triumph that wil be remembered for years to come:
VVS Laxman:@ajinkyarahane88 led the side brilliantly, giving a lot of confidence to youngsters and Pujara exhibited his steely resolve once again. Can't forget the young bowling unit. Fantastic team AUSvsIND."

Virender Sehwag: Khushi ke maare pagal. This is the new India. Ghar mein ghuskar maarta hai. From what happened in Adelaide to this, these young guys have given us a joy of a lifetime. There have been World Cup wins but this is special. And yes,there is a reason Pant is extra special .

Ishant Sharma: The champions & the greatest chase!Raising hands #TeamIndia has proved it again by team efforts, great character, courage & max determination! Despite the bruises, the team made it possible for our country. That's why we play for the country's flag to go high every time we perfomFlag of India#INDvAUS

Harbhajan Singh: Well done captain @ajinkyarahane88 this this biggest series win I feel.. Without many big names you guys have showed the way how it's done congratulations @BCCI

Stuart Broad: Test cricket's heart is beating strongly! That was an extraordinary win @BCCI & a fantastic series to watch. Aussies not lost at The Gabba since 1988. Wow

Kevin Pieterson: Only issue with India beating Australia in such an INCREDIBLE manner, is that the Test was played in Brisbane. A city that doesn't deserve an event so good! Rolling on the floor laughing. Pant - the boy who turned into a man today in Australia, in cricketing terms!

Michael Vaughan: The Greatest Test series win of all time ... Well done #India you have just shown the way for England to get back those Ashes back later in the year ... Thumbs up

Ian Bishop: Remarkable. Injuries galore, absent players, & beating Australia at their fortress at the Gabba. This has been the most remarkable test series victory I've watched in my experience. India's depth of talent, heart and character must forever lift an entire nation. Congratulations.

Shane Warne: Congrats to the Indian cricket team @BCCI That's one of the best series wins I can ever remember on Aust soil & to do it after being bowled out for 36, plus a depleted squad-shows tremendous character, resilience, courage & belief. Just fantastic @RaviShastriOfc @ajinkyarahane88.

Anirban Lahiri: That ..... Was ...... Incredible!!!!! Feel like the child I was who lived and died with every ball Cricket bat and ball #goindia

Mahesh Bhupathi: Congrats Team India. This is one of the greatest upsets of all time. Winning the series at the Gabba. #goosebumps #thereisnoiinteam #fortress @ajinkyarahane88

Sports Minister Kiren Rijiju: Congratulations to #TeamIndia Flag of India for the historic victory and retaining the Border-Gavaskar trophy Trophy We are proud of your excellent performance and the grit & determination displayed by our young players.

Google CEO Sundar Pichai: One of the greatest test series wins ever. Congrats India and well played Australia, what a series #INDvsAUS.