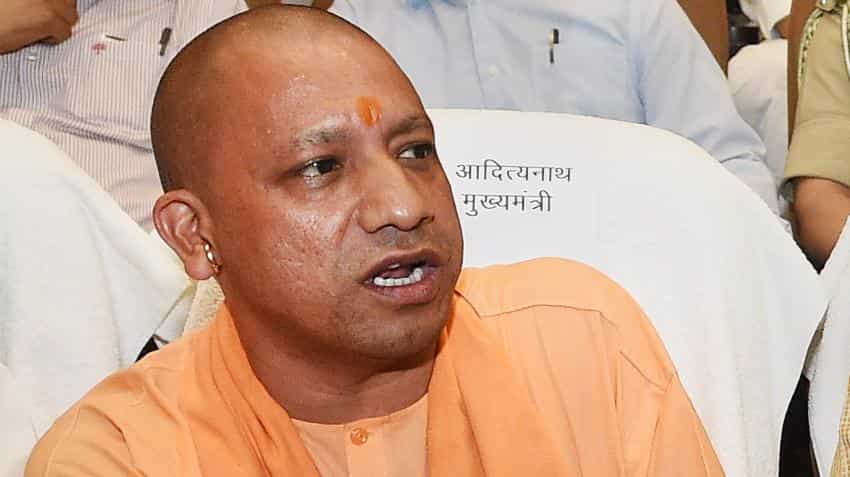 Yogi Adityanath at a function on completion of one year of BJP government in the state at Lok Bhawan in Lucknow on Monday. Image source: PTI
Written By: IANS
RELATED NEWS

As the Bharatiya Janata Party (BJP) government completed one year in Uttar Pradesh on Monday, Chief Minister Yogi Adityanath promised more crackdown on the corrupt and criminals in the coming days. The safety and security of the people was a top priority for his government, he said, adding that there would be no let up in the crackdown against criminals, land mafia, copying in board exams, anti-social elements and eve-teasers. Speaking at the celebrations, the Chief Minister went on to say that his government worked relentlessly in the past one year to achieve these goals which are in sync with the dreams of Prime Minister Narendra Modi's 'New India'.

In his hour-long speech, the 45-year-old said his government had inherited empty coffers, a chaotic government system and lawlessness. It took him almost a year to make a turnaround, he said. "There was a time when investors and businessmen would dread to come to Uttar Pradesh with their money. This perception has been changed by us and we have now become the most attractive destination for investment," he said. "We have done the unthinkable. Investment of more than Rs 4.68 lakh crore has been promised and we have already started work on bringing to ground MoU's worth Rs 25,000 crore," he added.

He claimed that his government had provided 11 lakh houses to the urban and rural poor. Aware of resentment in the real state sector and among farmers owing to the royalty on mud dug from fields, he announced that the government was lifting the royalty on mud and that the farmers can now dig up soil and utilise it in any way they find it proper.