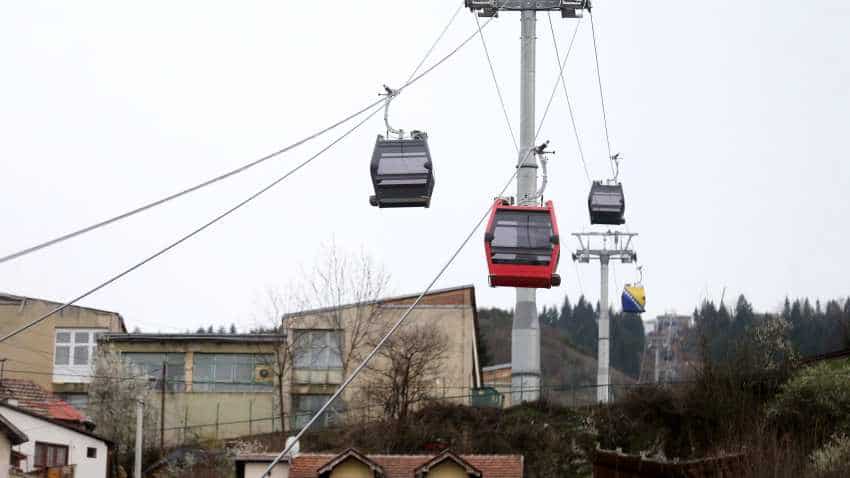 Port Rail Connectivity Corporation (PRCC) has identified 100 spots where ropeways will be beneficial, the road transport minister said while addressing an event after signing of a pact between Austria's Doppelmayr and India's WAPCOS for end to end solutions for passenger ropeway projects.

Besides, he said JNPT was going for tender for a ropeway project. "Prime Minister Narendra Modi's new India vision can be actualised through this transport revolution," he said and urged Doppelmayer to follow 'Make in India' policy.

"I will request you should take initiative to manufacture all types of material here under Make In India... This is going to reduce the cost" Gadkari termed ropeways as innovating transport system that can revolutionise traffic solutions especially in hilly states like Jammu & Kashmir, Uttarakhand, Arunachal Pradesh and Himachal Pradesh besides tier II and III cities.

"I will suggest this is a goldmine (ropeways and other such systems) given population increase. Technology is economically viable ...It has huge potential. Power is available here. "Port Rail Connectivity Corporation is there. They are doing railway line works worth Rs 40,000 crore. They can also mandate this. State governments can go on nomination basis...There are various options provided by the company right from ropeways to funicular railway, aerial tramway, Gondolas and cables," Gadkari said.

Describing ropeways as a revolutionary concept for most hilly areas, Gadkari said Uttrakhand has come with a proposal for its installation of 10 places which will be looked into, provided the state offered land clearances and other regulatory clearances. He said for villages and cities with 5-8 lakh population, it wad need of the hour and would not only battle pollution in tier II and III cities besides metropolises but also cut down on India's huge crude import bills to the tune of Rs 8 lakh crore per annum.

He said ropeways will revolutionalise the transport sector as its cost was about 50 crore per km as compared to Rs 350 crore for metro and hydro power is available besides electricity. Such innovative technologies were badly needed in India, given 22 per cent annual growth in automobile and aviation sectors, he said, adding that to cater to the spurt of automobiles, a separate highway lane would not cost less than Rs 88,000 crore which was unviable.

Gadkari said, this is a historical day as it will change the face of urban transport in the country. Cable cars and ropeways have already proven to be successful in Bolivia, Vietnam, Switzerland and many other countries. The government is exploring the use of new kinds of vehicles like hybrid aeroboats that combine land, water and aviation technology and can run on land, water and air at speeds greater than 80 km per hour.

The minister also informed that ten National Waterways, including Ganga, are being developed for transport. It will soon be possible to carry goods from Varanasi to right up to Bangladesh and the northeastern states on waterways. He said it took almost two years to reach the agreement with Doppelmayr as discussions were started during his visit to the World Economic Forum in Davos.

Michael Doppelmayr, Chairman of the Group, said the technology has relevance for India and has done extensive work right from Switzerland to Nigeria. The memorandum of understanding (MoU) was signed by RK Gupta, MD, WAPCOS and Vikram Singhal, MD and CEO, Dappelmayr India.
The MoU will enable development of ropeway projects in various states using globally accepted standards for passenger safety and reliability.

According to the agreement, WAPCOS and Doppelmayr will jointly conduct feasibility studies, prepare detailed project reports for installation of cable cars with a view to provide modern transport solutions for decongestion and last mile connectivity for urban areas and hilly and difficult terrains.

The Austrian company has set up about 15,000 ropeway installations across the world and the UN Habitat has also tied up with it to address the urban decongestion at global level. WAPCOS, a state-owned entity, is an Indian multinational with footprints across the globe.