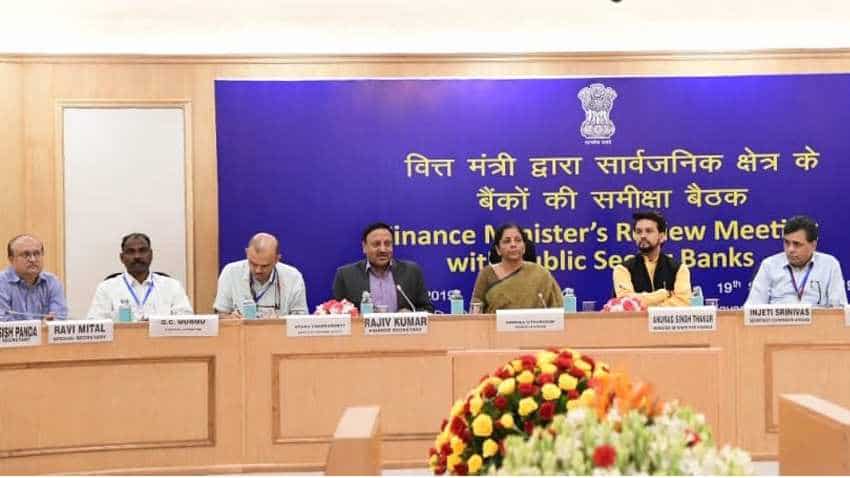 Union Finance Minister Nirmala Sitharaman and MoS Finance & Corporate Affairs Anurag Thakur on Thursday held a review meeting with Public Sector Banks (PSBs) at New Delhi. A number of issues relating to the sector were discussed. Discussions were held on overall credit growth with focus on disbursements to key sectors to support the needs of economy, revealed the Finance Ministry. Also on the agenda were credit growth, rate cut transmission and amalgamation. Addressing a press conference with Thakur and other officials by her side, Finance Minister Nirmala Sitharman had these BIG announcements to make:-

- The intention of government is that liquidity should reach consumers before the festival season begins, said FM.

- Effort is to ensure that credit is provided wherever there is a need, but in a transparent manner. FM said that banks have started moving in line with the measures announced of late for providing liquidity.

- Finance Minister said that banks will now show that they are pushing liquidity through NBFCs or directly through customers.

- Public sector banks will hold 'Shamiana' meetings with representatives of Non-Banking Financial Companies (NBFCs) and prospective clients in 400 districts across the country to ensure that more liquidity is available on the ground to those who seek it. She said that 200 districts will be covered in the first phase till September 29 and the next 200 districts will have similar gatherings from October 10 to 15. The intention is to provide credit to borrowers, including homebuyers and farmers in the country.

- Finance Minister said that it's been decided that there will be a gathering of NBFCs & retail customer in 200 districts between now & September 29.

- "Banks will be encouraged to include new retail customers for lending."

- Finance Minister said that they have reviewed liquidity moving from banks to NBFCs & NBFCs to customers.

- "Liquidity situation for NBFCs has changed."

Noteworthy, these big developments took place a day ahead of GST Council Meeting.

37th GST Council meeting is scheduled to be held on the 20th of September in Goa. Nirmala Sitharaman, the Union Finance Minister, will chair this Council meeting.