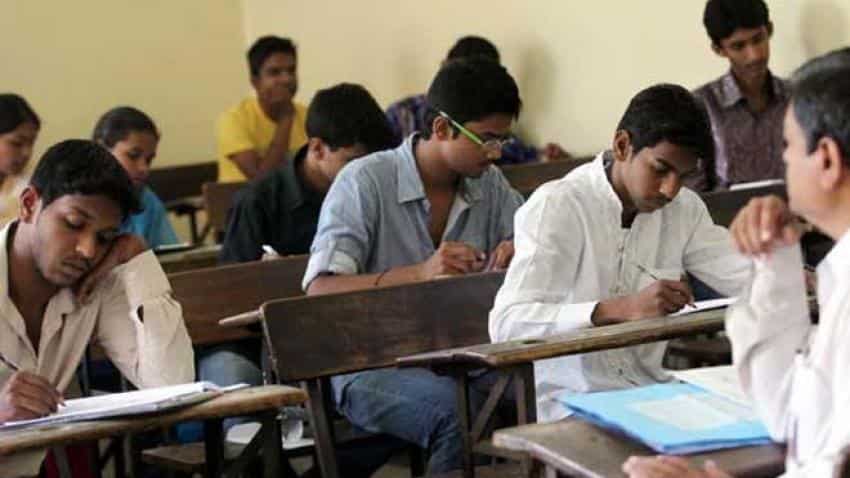 The NHRC said that according to a news report, a statement issued by the CBSE says that at least 3,685 medical aspirants from Tamil Nadu had to travel out of state to take the exam. Image source: PTI

Members of the Students’ Federation of India (SFI) on Monday protested near the zonal office of Central Board of Secondary Education (CBSE) here, over the controversies surrounding the National Eligibility cum Entrance Test (NEET). Police detained around 30 members of the SFI, who attempted to stage a protest outside the CBSE’s Chennai regional office in Anna Nagar against NEET. Around 50 SFI members took out a march towards the CBSE office to register their protest against NEET and to demand that the entrance exam — that was held on Sunday — be cancelled. However, the protesting students were detained by police even before they could reach the office.

The SFI staged a protest in the wake of a 46-year-old man from Tiruvarur in Tamil Nadu dying, following a cardiac arrest in Kerala’s Ernakulam on Sunday, while accompanying his son for the NEET exam. We told them (police) that we would not create any ruckus and that we just wanted to register our protest. Still, they didn’t grant us permission and took us away,  said SFI, Chennai district president D Chandru. The protesters, including two women, were detained in a wedding hall and later released in the evening.

CPI (M) state secretary K Balakrishnan and his CPI counterpart R Mutharasan condemned the police for using force against the protesting students. The National Human Rights Commission on Monday issued notices to the Central Board of Secondary Education (CBSE) and Tamil Nadu government for causing hardships to the students who had to travel out of their states to write the National Eligibility cum Entrance Test (NEET). Taking ‘suo motu’ cognizance of media reports alleging hardships faced by NEET students, the NHRC, in a press release, has sought a detailed report from the CBSE’s chairperson and Tamil Nadu chief secretary, explaining as to why the students had to travel across the State to appear in the examination. It would also like to know as to what steps are being taken by both the authorities to ensure that such incidents do not recur.

Reacting to the NHRC notice, senior AIADMK leader and Fisheries Minister D Jayakumar blamed the CBSE for the hardship caused to the students.  It is the responsibility of the CBSE to hold the exams without any confusion. The CBSE did not seek help for setting up of more examination centre,  he told reporters.

Citing the incident of a 46-year-old man (Krishnaswamy Srinivasan) from Tamil Nadu, who had to travel 500 km with his son, to appear in NEET at a centre in Kerala, who died due to a cardiac arrest on Sunday, the commission has observed that the contents of media report, if true, raise a serious issue of violation of human rights. Students go through tremendous pressure due to examination; it is the duty of the State to ensure that they should not be subject to any kind of discomfort, while they are appearing for the entrance examinations. It appears that the State government and the CBSE authorities have failed to provide examination centres to the aspirants within the State, resulting in hardships, not only for the students, but also their parents,  it said.

The NHRC said that according to a news report,  a statement issued by the CBSE says that at least 3,685 medical aspirants from Tamil Nadu had to travel out of state to take the exam.
(Source: DNA)

NEET 2022 answer key release date: Key to be released soon at neet.nta.nic.in; check latest updates and how to download here

NEET 2022: Women candidates can get 60 per cent discount on OYO rooms booking; know how to claim