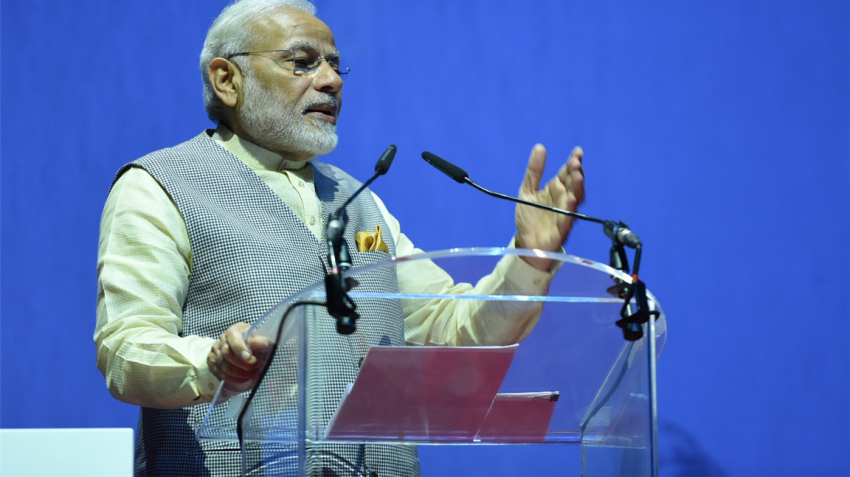 Prime Minister Narendra Modi today launched the subsidised scooter scheme for working women on the occasion of RPT the occasion of the 70th birth anniversary celebrations of late leader Jayalalithaa.

It was launched in the presence of Tamil Nadu Chief Minister K Palaniswami and his deputy O Panneerselvam, among others.

The scheme, with a subsidy component of 50 per cent upto Rs 25,000 for working women, was launched by Modi, who handed over the keys and registration certificate copies to five women beneficiaries.

The beneficiaries included women who worked in the private sector, an accountant, a salesperson and an assistant in a private store.

A smiling Modi exchanged a few words with the beneficiaries while handing over the keys.

Palaniswami in his address urged Modi to take steps to set up the Cauvery Management Board and the Cauvery Water Regulatory Committee, as directed by the Supreme Court.

He said 70 lakh saplings would be planted through out the year and also thanked the Prime Minister for lauding the ancient language Tamil recently.

The Chief Minister also recalled a slew of welfare initiatives and freebie schemes launched by Jayalalithaa.

These included 'thalikku thangam,'(gold for mangalsutra) for women beneficiaries,free milch cow and goats,free of cost computers for students and new colleges for the uplift of rural students.

Stating that Amma had implemented several schemes for the safety and well being of women, right from their birth to old age, Panneerselvam said this scheme too envisioned by the late leader, was for people's welfare and development.

He said this scheme too would be the forerunner for other state governments, like other previous initiatives.

So far 3,36,103 women have applied under the scheme and scrutiny of such applications were under process, according to the ruling AIADMK.

Palaniswami had announced in December last that scooters would be distributed to one lakh women at a subsidised rate on the occasion of Jayalalithaa's 70th birth anniversary.

From there, he flew to INS Adyar Naval base near Marina beach, from where he reached the function venue by road.

Cadres of BJP, ruling AIADMK holding their party flags and the general public lined up both sides of the road welcoming Modi to the venue, 'Kalaivanar Arangam.'

The Prime Minister, who planted a sapling to mark the event, is scheduled to stay at Raj Bhavan here later tonight and leave for neighbouring Puducherry tomorrow.

The subsidised scooter scheme for working women is an electoral promise of late Jayalalithaa.

During the 2016 Assembly election, she had promised 50 per cent subsidy for women to purchase two-wheelers.

Last month, the state government increased the subsidy component under the scheme from Rs 20,000 to Rs 25,000.

Earlier in the event, Palaniswami presented a memento, Panneerselvam a shawl welcoming Modi.