Prime Minister Narendra Modi and Indian cricket team captain Virat Kohli are "spectacular" players in their spheres who are not easy to defeat, said Finance Minister Arun Jaitley Tuesday on his prediction for 2019 general election and India's chances of winning the world cup again. 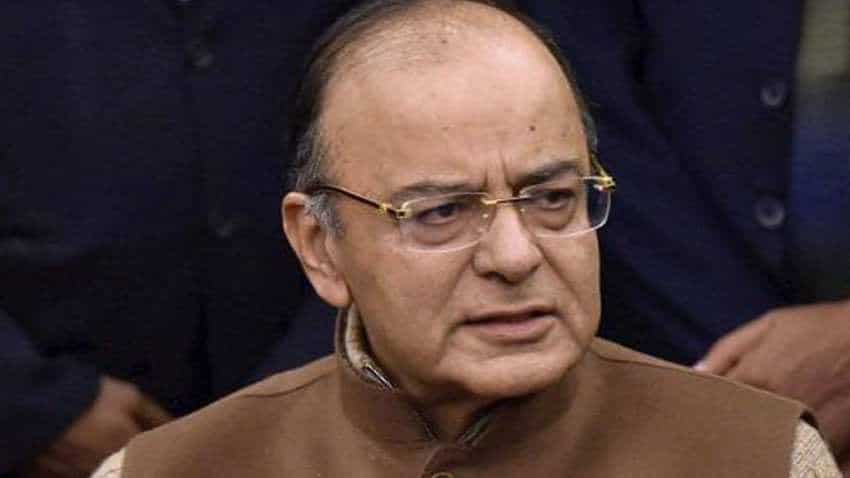 While India will elect a new government before May-end, the national cricket team will go to England and Wales to play Cricket World Cup, kicking off near the same time next year. Image source: PTI
Written By: PTI
RELATED NEWS

Prime Minister Narendra Modi and Indian cricket team captain Virat Kohli are "spectacular" players in their spheres who are not easy to defeat, said Finance Minister Arun Jaitley Tuesday on his prediction for 2019 general election and India's chances of winning the world cup again. While India will elect a new government before May-end, the national cricket team will go to England and Wales to play Cricket World Cup, kicking off near the same time next year.

At the 'Agenda Aaj Tak', Jaitley, a cricket enthusiast and a keen political observer, was asked for his prediction on the general election and the world cup. "In both spheres, there are spectacular players -- Virat Kohli and Narendra Modi. And it is not easy to defeat them," he remarked.

Putting his money on Kohli-led Indian squad, he said it is "very tough" to defeat the current Indian cricket team in the short form of the game. On elections, he said the 'Mahagathbandhan' or grand-alliance of opposition parties was a failed idea as "no country will jump in to commit suicide" by electing a combination "which does not have stability or ideology" or has no certainty of the leader.

He accused Congress President Rahul Gandhi of "lying" on Rafale fighter jet deal and fugitive liquor baron Vijay Mallya, who is wanted in the country for defaulting on bank loans. "I will only say that he (Rahul Gandhi) lied on both the issues (Rafale and Mallya). Lie is short lived and if you want to do serious politics (and) have credibility, it is important that you understand the seriousness of issues. This is a must for him to have a long run in politics," he said.

He accused the previous Congress-led UPA government of not doing enough to provide the fighter aircraft that Indian Air Force needed and said the deal negotiated by the present BJP-led NDA government is cheaper than the previous one. "If we have combat aircraft which can fire from 100 km distance at the target, then the (Kargil) war would have ended in lesser time," he said.

The government is getting Rafale jets at 9 per cent cheaper rate than barebone jets negotiated under the deal by the UPA government and 20 per cent cheaper than weaponised one, he said. "It is a matter of shame that the Air Force raised the demand for combat aircraft in 2001 (when NDA was in power) and till 2014, it did not happen. "Prime Minister (Narendra Modi) told the French President that we will buy it at terms and conditions lower than the earlier one (the previously negotiated deal)," he said.

When asked about Congress' demand for a Joint Parliament Committee (JPC) on Rafale deal, he said the pricing details were given to the Supreme Court which said that the process has been followed. "The Supreme Court said offset was decided by Dassault (the French firm manufacturing Rafale fighter jets). "Parliamentary committees have a history of being split on partisan lines. We have a majority there. But to conduct a farce which will only delay something which is inherently required in national security and after the Supreme Court judgement, there is no occasion for the matter to be called into or investigated," he said.

On the Supreme Court judgment stating that the deal has been examined by the CAG and is now before Public Accounts Committee (PAC) of Parliament as opposed to the fact that CAG is yet to give its report, Jaitley said the government in its submissions to the apex court stated the correct facts.

"There is a matter pending in the CAG and if there is an ambiguity in the order, (like) I have seen in hundreds of cases as a lawyer... You mention that to the court the next day and clarify the ambiguity," he said. "So if ambiguity is the best argument of Rahul Gandhi, then obviously he has no damn case."