Modi holds bilaterals with Abe, Trudeau on sidelines of G20 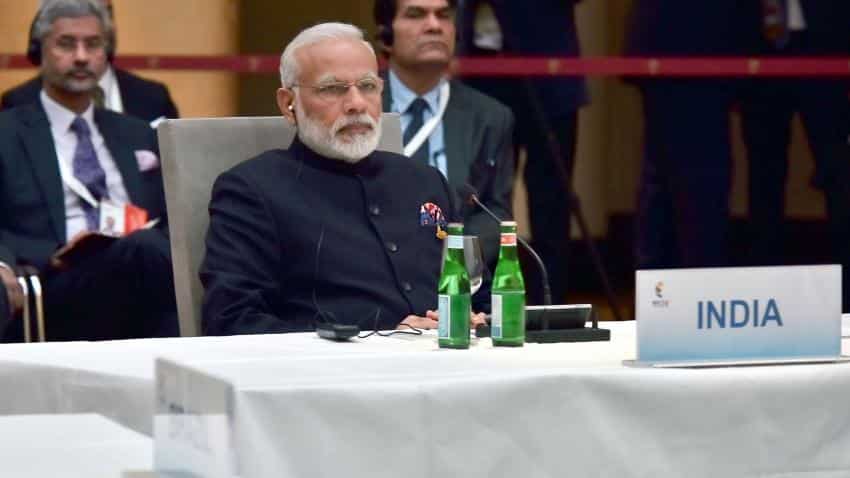 Prime Minister Narendra Modi at the informal meeting of leaders of the BRICS countries on the sidelines of the 12th G-20 Summit. Photo: IANS
Written By: PTI
RELATED NEWS

Prime Minister Narendra Modi on Saturday, held bilateral meetings with his counterparts from Japan, Shinzo Abe, and Canada, Justin Trudeau, along with informal interactions with a number of world leaders on the sidelines of the G20 Summit here.

Modi and Chinese President Xi Jinping also shook hands at the BRICS meet and had a conversation on a "range of issues".

The interaction between Modi and Xi took place amidst bilateral tensions over the Sikkim standoff.

He later met Abe and Trudeau and discussed a host of issues.

"Today in Hamburg, PM Justin Trudeau and PM Narendra Modi affirmed the strength of the bond between Canada and India," the office of the Canadian premier tweeted.

Regarding Modi's meeting with Abe, the Ministry of External Affairs said the two leaders reviewed the progress in bilateral relations, including in important projects, since their last meeting in Japan during the Indian prime minister's visit in November 2016.

He said that he looked forward to Abe's forthcoming visit to India for the next annual summit and hoped it would further strengthen their cooperation.

A family photo of the BRICS leaders was taken earlier.

Tomorrow, Modi will have bilateral meetings with head of the governments of South Korea, Italy, Mexico, Argentina, the UK and Vietnam. He will also participate in G20 sessions on -

Partnership with Africa; Migration and Health; and Digitalisation, Women's Empowerment and Employment.

After attending the concluding session in evening, the Indian prime minister will leave for New Delhi.

Phillip Capital says FY22 Budget will be icing on the cake