"I am hoping Jio can help me bring down my bills while providing unlimited internet usage," said Pushpraj Yadav, an e-commerce worker in Mumbai who complains he "incurs huge bills" for his data use. 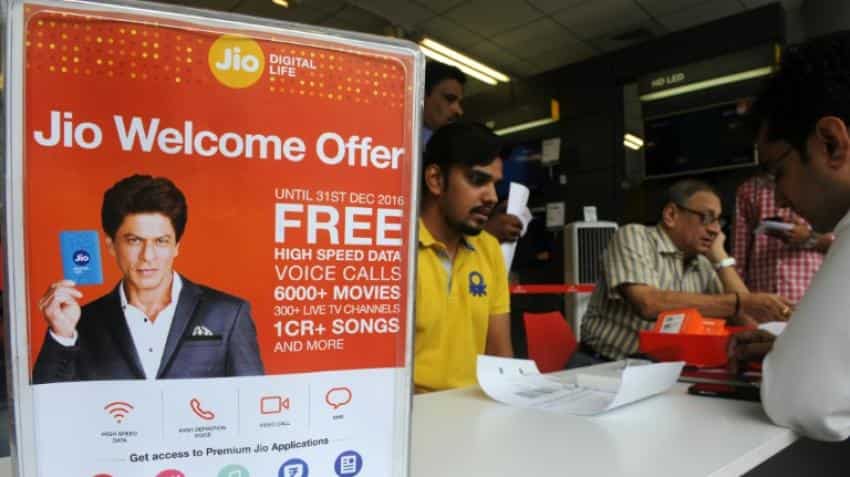 "I am hoping Jio can help me bring down my bills while providing unlimited internet usage," said Pushpraj Yadav, an e-commerce worker in Mumbai who complains he "incurs huge bills" for his data use. Pic: AFP
Written By: AFP
RELATED NEWS

Outside a tiny Reliance store in a trendy Mumbai neighbourhood, residents queued for hours this week for a new SIM card promising free data -- and a dramatic reshaping of the Indian mobile landscape.

Anticipating the shake-up, rival Airtel has already slashed 3G and 4G prices by up to 80 percent while Vodafone has heaped more data into its prepaid tariffs.

Yet analysts say competitors will struggle to match the deep pockets of a startup backed by Reliance Industries, the energy-to-chemicals conglomerate.

"I am hoping Jio can help me bring down my bills while providing unlimited internet usage," said Pushpraj Yadav, an e-commerce worker in Mumbai who complains he "incurs huge bills" for his data use.

"Competition between Jio and other networks like Airtel is good for consumers."

"With Reliance Jio, I expect the data charges to be low and the connectivity to be better than other networks," said Amit Biswas, an Indian navy officer in Mumbai.

"Mobile connectivity in some parts of the country is really bad."

With his $20 billion investment in mobile, Ambani is betting on a fast-evolving internet landscape in a country where nearly a billion people are still not online.

Public wifi is scarce and broadband access is weak, with many rural areas lacking the infrastructure to deliver high speeds.

Most of the hundreds of millions of Indians coming online over the next decade will start with smartphones, something being avidly targeted by tech giants Google and Facebook.

Ambani hopes to win over those who have never had an internet connection and for whom mobile data was previously unthinkably expensive, with a high-speed 4G covering 90 percent of India by March 2017.

"This is going to change the dynamics of the game," said Bhasker Canagaradjou, head of research at Ipsos Business Consulting in Mumbai, adding that data use was already growing at an "exorbitant" rate.

Under the Reliance plans, a gigabyte of data costs as little as a tenth of the previous 250 rupees ($3.70). He expects competitors to slash their prices by 30-40 percent.

Combined with ever-cheaper smartphones, the new 4G network will swell the number of internet users and prompt those already using data, millions of them on sluggish 2G networks, to upgrade.

"Indians are cost-sensitive. Even though they may have money, if they find something cost effective they will go and try it, it is in the DNA," Amresh Nandan, research director at consulting firm Gartner in New Delhi told AFP.

Competition hit full stride on Monday in the form of warring front-page newspaper advertisements by the main rivals -- with Reliance controversially using an image of Prime Minister Narendra Modi to promote its offering.

The newcomer seeks to upend a market at present two-thirds dominated by three players -- Airtel, Idea and Vodafone -- saying it aims to secure 100 million customers in the shortest possible time.

As the battle heats up, with mobile providers eschewing profitability to gain a foothold, analysts say smaller providers such as Tata Docomo or Aircel may be forced to merge or go under.

"Jio will make a major dent and lure away consumers in the near future," said Nikhil Pahwa, founder of Medianama, a digital media news site.

"With increased competition and price wars, many smaller players will find it difficult to survive."

Yet while freebies have won it attention, the proof will be in the service, analysts say.

While low income customers -- who often use two SIM cards in the same phone to hop between plans -- may switch straight away, better-off users are more likely to wait and see.

Others suggest it is an eye-catching gimmick and that, as with most things, free does not really mean free.

Umesh Mehta, research head at SAMCO Securities in Mumbai, said that "hidden costs and indirect charges" meant the savings would not be as great as the marketing campaigns suggest.

Yet in Mumbai, customers queued in searing heat in Colaba neighbourhood, undeterred.

Jishnu Prasad, a hotel management student from Bhopal, said he is currently a Vodafone customer but expensive data means he is open to being courted.

"I am purchasing a new SIM card to check out the features during the trial period. If I find the facilities good, I will continue," he said.